That's because Scorpio is a monster.

Well, imported hardware prices will scale accordingly to nominal exchange rates, while services are priced locally. So it makes some sense.

Of course, the latency would be insane and there's still an expensive controller to buy so nah.

Early days, early games and you conveniently ignore this

60 fps for a streaming service is pretty good, that with lower latency than a lot of 30 fps games on console. (Yeah latency is still 44ms higher for this game compared to the console version, not bad but still noticeable)

Those countries often also lack fast internet in turn - and when you can afford fast enough internet for stadia in those countries, you can very well afford a console there, too.

Ok guys, I figured out the exact spec each user is getting from Google stadia

The cpu is based on this slide, where several people on twitter and reddit said it's a Intel Xeon 4core/8thread Cpu based on the L2 + L3 cache number 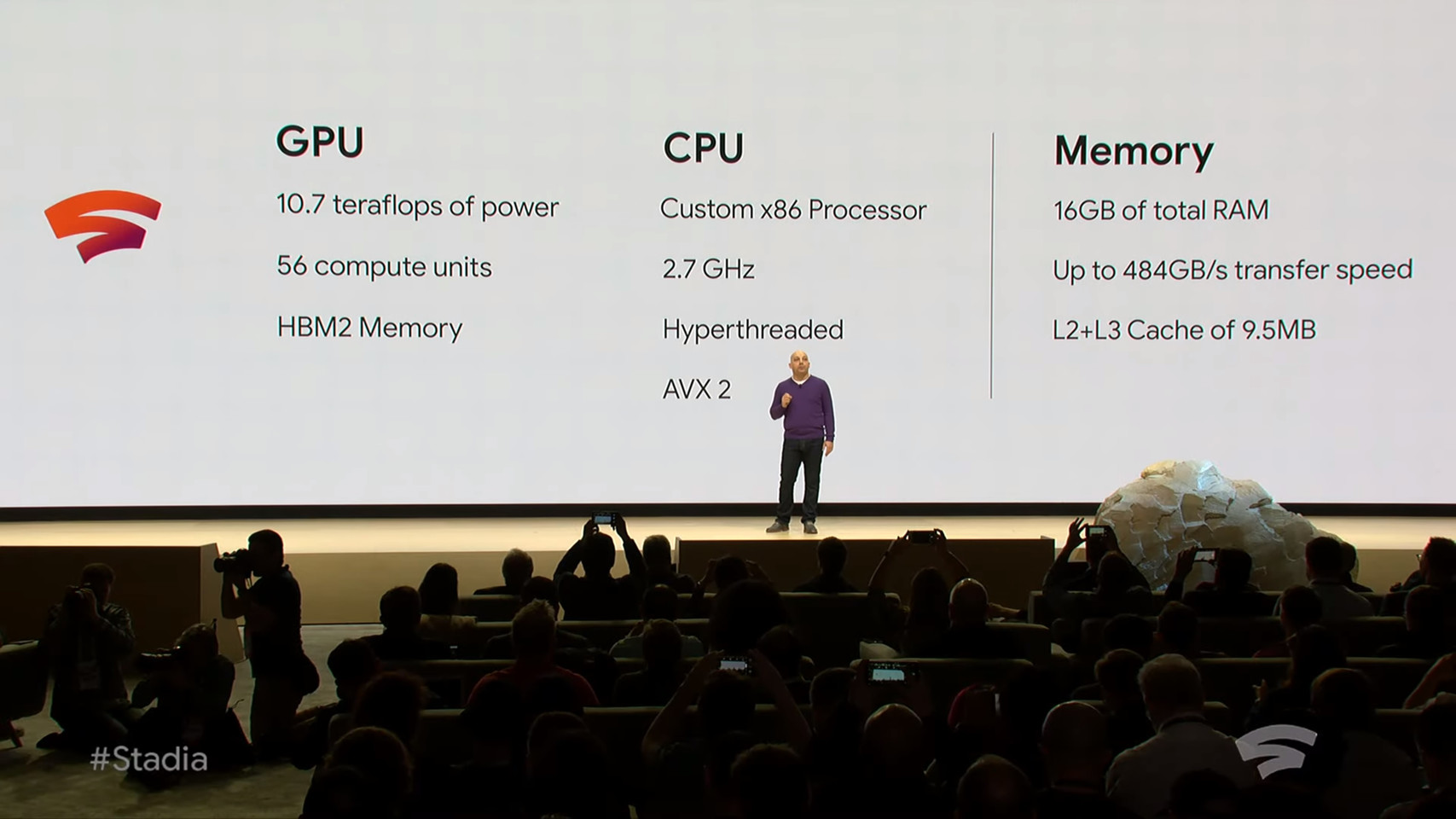 The amount of RAM is based on the slide above and this quote from Arstechnica "a total of 16GB combined VRAM and system RAM clocked at up to 484 GB/s".

8GB hbm2 + 8GB DDR4 makes the most sense based on that quote.

We now know that Destiny 2 is running at 1080p/60fps at medium settings. Now looking at a benchmark on guru3d, vega 57 which has 10,5TF gets 142FPS at 1080p medium settings, split that into 2 users you get 71fps. The professional VEGA GPU have 16GB of HBM2 and 11,3TF (air cooled version). So I simply think google is using a professional vega gpu at 10,7TF with 16GB of HBM2 and splitting the gpu for 2 users.

Let's hope Eurogamer will do it's job and ask google exactly what hardware spec each user is getting as it's kinda funny how people are paying money into google stadia and can't be sure what kind of hardware they're getting :) and note I'm just guessing but sharing what I'm guessing this on.

YouTube always makes my video uploads very blurry so I guess this is on brand.

And you pay a subscription fee + full price of the game on a supposedly better HW (that some swear would compete with PS5 and Xbox next) to get an inferior result than X1X and probably PS4Pro, no thanks. And all that for a small selection of older games.

Nope, you are wrong, the game is rendered at 1080p then upscaled to 4k for the streaming (and probably after the rendering compressed)... it is a cluster of fuck.

@bolded: That's what I was alluding to, that their compression is shit because they wanted to keep internet bandwith low. Upscaling a 1080p resolution to 4K is just the cherry on top to achieve that goal. Iirc then you needed 10 Mbit for 720p, but with 30 Mbit you already reached 4k according to them. It was clear to me that this needed some trickery like extreme (and inadequate) compression - and upscaling on top of that as it seems.

I mean, these are the recommended bandwiths for 4k60:

Keep in mind that the minimum of 40 Mbit needs to be a rock-solid at all times to work, which is rarely the case over internet.

Sometimes it looks worse than the base PS4 and XB1s does.
Ontop of that theres stuttering (audio isnt synced, and will hitch), and input lag (anywhere from like 0,5sec to full 1s).

Your getting a worse experiance than a console does.
Some of this is fixable, if google spends more on the servers, and if people have good enough bandwidth and data caps.

However whats not really fixable is the input delay (it varies on case by case, depending on where you live)

27 secounds into it, he does some input lag testing...... just the eyeball type.
However its so bad, you dont really need equipment to messure it.

You can observe the delay between his key press, and the action ingame.
Its long in this case, like 1+ secound of delay.