Virtualization doesn't work like that. The way instructions need to be assigned and executed in the complex GPU pipelines, each with different burst times, data fetches etc. would mean that each "half" would have far less computing power than it is theoretically available. And it would probably be readily noticed from frame time spikes and latency, a bit like what happens with dual GPUs but worse.

Not to mention that comercially speaking, two GPUs half the size of a larger one would have been a cheaper alternative considering how the costs for larger dies scale. Of course, I'm not saying is impossible that it could have happened, maybe Google did invest a lot on GPU resource scheduling and sharing (to little results), but it would seem super sloppy and amateurish even for the standards of the Stadia launch.

PSNow have passed 1M subs, but it still is under 2M.

That's a very good point. For the experience to not feel too laggy, there needs to be less than 200 ms between the time you press a button on your controller and the time the input makes it's way to the Stadia box, processes the data, grabs the next frame, compresses it, sends it back, gets de-compressed on the user's end, and finally displayed on the screen. Only fast compression algorithms can be applied, and they are lossy.

I was optimistic about Stadia when it was first announced, back before we knew anything about pricing or their launch line-up. As someone else mentioned, until exclusives arrive, there is no good reason for me to bother playing on Stadia, as I already have the means to play every one of their games on other platforms, in an environment that isn't going to cut into my data cap and won't be inconsistent.

It could have been so much better.

It's hard to believe that $120 a year for gamepass, spread over I don't know how many games, can be a good source of income for publishers other than MS. Besides that, a lot of people just get it now and then at discounts. I played a bunch of games with gamepass for $1. Nobody made money off that lol.

The problem is that you're paying 10$ a month to play in 4K when it doesn't even run at a 4K resolution. It's a lie from google and it makes the 10$ a month subscription pointless if it can't run games in 4K

Seems you know a lot about this stuff, but I don't see the issue. Here's a youtube video of a gpu running 6 games on a tesla V100. Why can't Google do similiar to AMD gpus?

Edit: I just tested myself on my computer running Star wars: the old republic and World of warcraft at the same time in windows mode. No issue what so ever. They both ran 60fps/1440p at all times no frames drop what so ever.

Well if millions subscribe which has been claimed, that becomes hundreds of millions of dollars annually.

More importantly, you're looking at Gamepass as a sole revenue stream. If that was the case than it would have a massive number of subscribers.

I'm sure MS pays more for a 3rd party game to launch on the service. Which they do often for indie games and other modest budget stuff.

Even when Gamepss gets a major 3rd party game its often months or longer post launch. Im sure publishers figure out the math before deciding if they should do it. Gamepass also brings more attention to a game or IP while bringing in revenue. Gold and PS+ are used the same.

People keep speaking as if content on Gamepass means the entire userbase is getting access to it. Gamepass at best is probably just a few million users. I also doubt everybody subscribes for a dollar.

Well looks like you're indeed correct, Eurogamers says shadow of the tomb raider is native 4k on stadia. So they are not splitting the performance. Why stadia have so much worse performance then 10,7TF vega gpu we can only speculate. It can be cooling as you said and porting the games to stadia might be difficult. Can also be the OS Linux as looking at benchmarks there, games seems to lose between 5-20% performance.

So could be any of those 3 things I mention or maybe all of them.

Skimmed through another lag test that was more comprehensive (explains all the equipment they used, and measured all the values).
Looks like there was a correlation between input lag and higher quality streams. 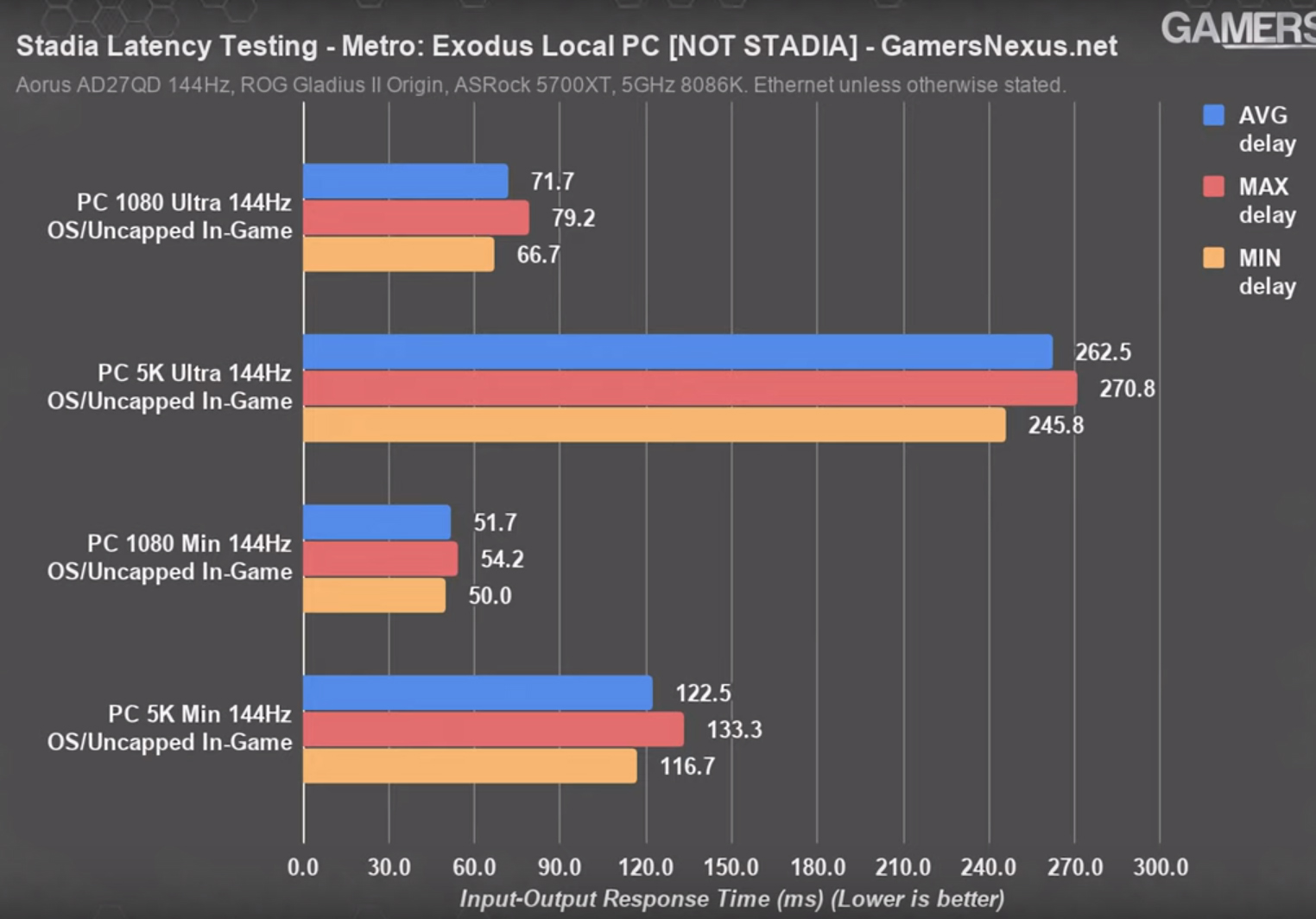 It's so strange that when you put more fps to have a smoothier experience and faster reaction you increase lag so much.