Forums - Microsoft Discussion - Everybody is doing a mini console except Microsoft

Yes. But it would be pricey. An OG Xbox mini would have to have at least 250-500gb hard drive in order to get a decent list of games. The hardware would have to be quite a bit more advanced than the PS1 mini thus I can see this thing retailing for 200-250 dollars.

The list is problematic because the Halos can be played in different remastered versions that are superior in current Consoles. However I think some of the less popular titles in a list like mine's would attract a few hardcore buys. I am all for it, the Xbox was the power House of that generation.

With that price you might as well add WiFi and allow multiplayer lol.  It'd be nice to play phantasy star online but the og servers were taken down I believe in middle of 360 era.  Yea the games are there but the power and space will make this too expensive.

That's what I am saying. The pricing would be a huge hurdle to overcome. Most of those games are considered fairly modern, so the nostalgic factor that might drive people to buy a Nintendo 64 mini, or Saturn mini wouldn't be there, at least yet. Perhaps a decade from now, by then the costs of such hardware would be lower too I suppose.

It's not cost-effective yet.
All the mini consoles have been Gen 5 and earlier. Xbox didn't enter until the sixth gen. Even 10 games on an Xbox Mini will at least rack up an $80 price tag. Probably higher than that.
Maybe once other mini consoles have come out and maybe after Nintendo 64 Classic, an Xbox Mini might make sense. I could see them including it with a Duke as well, or having the Duke as an optional accessory.

Sega Genesis didn't sell amazing numbers but it has had many different mini consoles and even portable versions. There have also been many Genesis compilations on consoles starting with the 6th gen.

OG Xbox definitely has more than 30 games that have aged well. By the 6th gen the dual stick was mostly figured out, especially in shooters. Might be difficult to license many notable games though, it seems like Sony struggled with their device.

Well I was never too fond of the original Xbox anyway, and already own a 360 + XB One.

After the SNES (which I own), the minis I MOST want to see are - N64, Gamecube, Dreamcast, PS2 (was never huge on Sony consoles but you can't deny the robust, diverse library of the thing & it's certainly my favorite Sony console).

I alway's wanted to try Otogi:Myth of demons , It's one of Fromsoft's games that never got ported to anything and is Xbox exclusive.

BTW is Jet set radio future possible on the mini? Heard someone saying that it can't be ported to Xbox one?Not sure? I'm sure fans of series solicited the game to Sega's fan mail?

But they aged sooooooo much better on Xbox One, Xbox One X or PC. "Das Bessere ist des Guten Feind" (The better is the enemy of the  good).

While playing these classics on an Xbox mini, I would probably ask myself every minute: "Why am I playing this game in 480i / 480p instead of playing it in 1080p or 4K on a better suited device?"

Especially if there are further enhancements than a higher resolution like in Halo 1 + 2 Anniversary and Fable Anniversary.

On the other hand we have used Xbox One (S) consoles for less than $100 (or a new one for less than $150) and $1 - $5 GamePass subscriptions, which allow to play 30 RARE classics (RARE Replay is included in the GamePass), Ninja Gaiden Black, Star Wars: KotOR, Fable Anniversary (plus Fable 2 + 3), Halo 1 + 2 Anniversary (plus Halo 3, 4, 5, Reach, ODST) and Fuzion Frenzy, gives access to over 50 other Xbox 360 games and over 100 other Xbox One games and compatibility to over 40 Xbox originals, hundreds of Xbox 360 games and thousands of Xbox One games.

Maybe it is just me, but I find the second option much more valuable, even with a focus on the older Xbox games (original Xbox + Xbox 360 classics).

P.S.: I bought "Conker Live & Reloaded" today. Not only higher resolution and better textures (due to better level of detail settings?), but also locked 30 fps on Xbox One (S + X) instead of the 20 - 30 fps on the original Xbox: 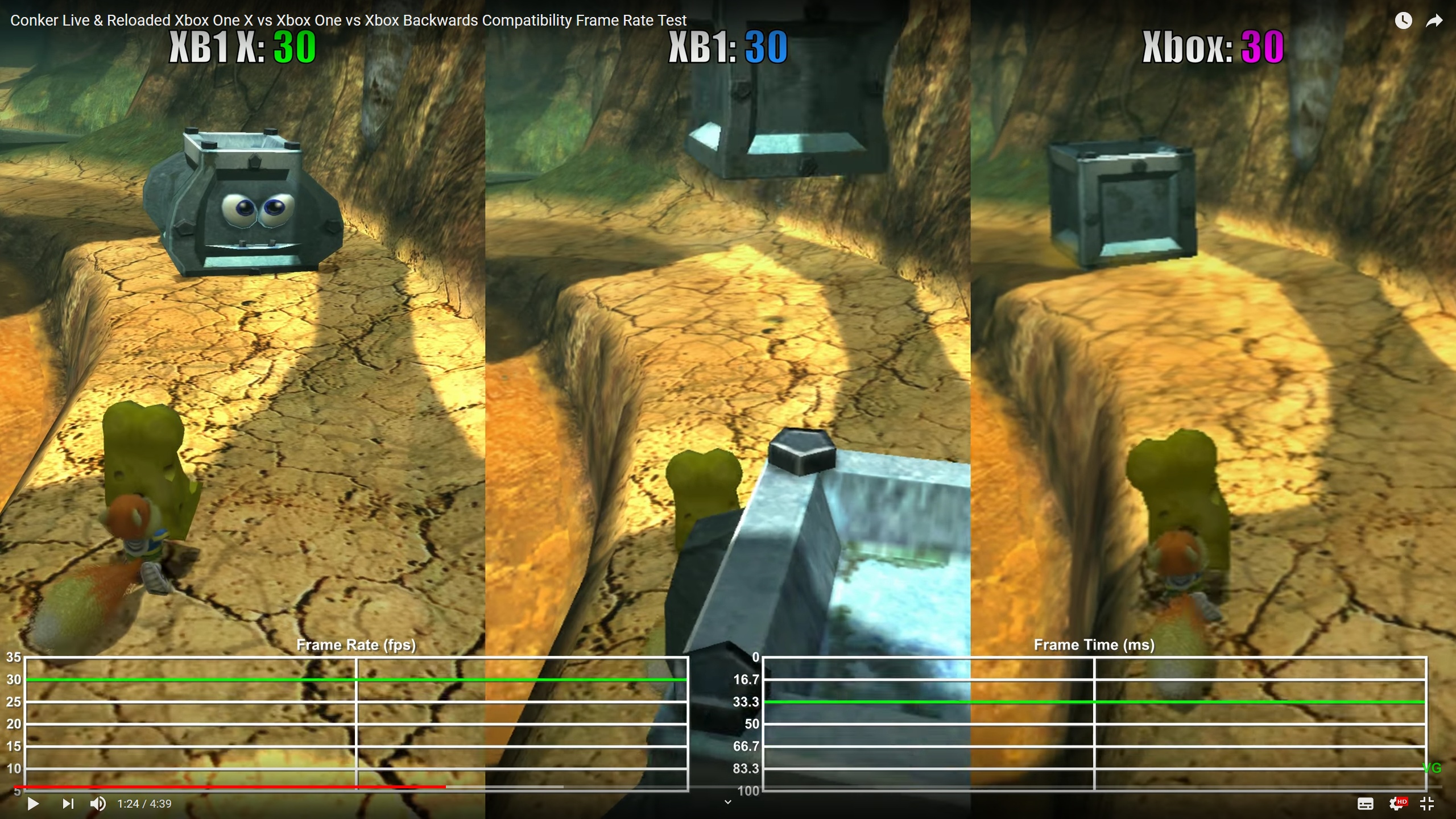 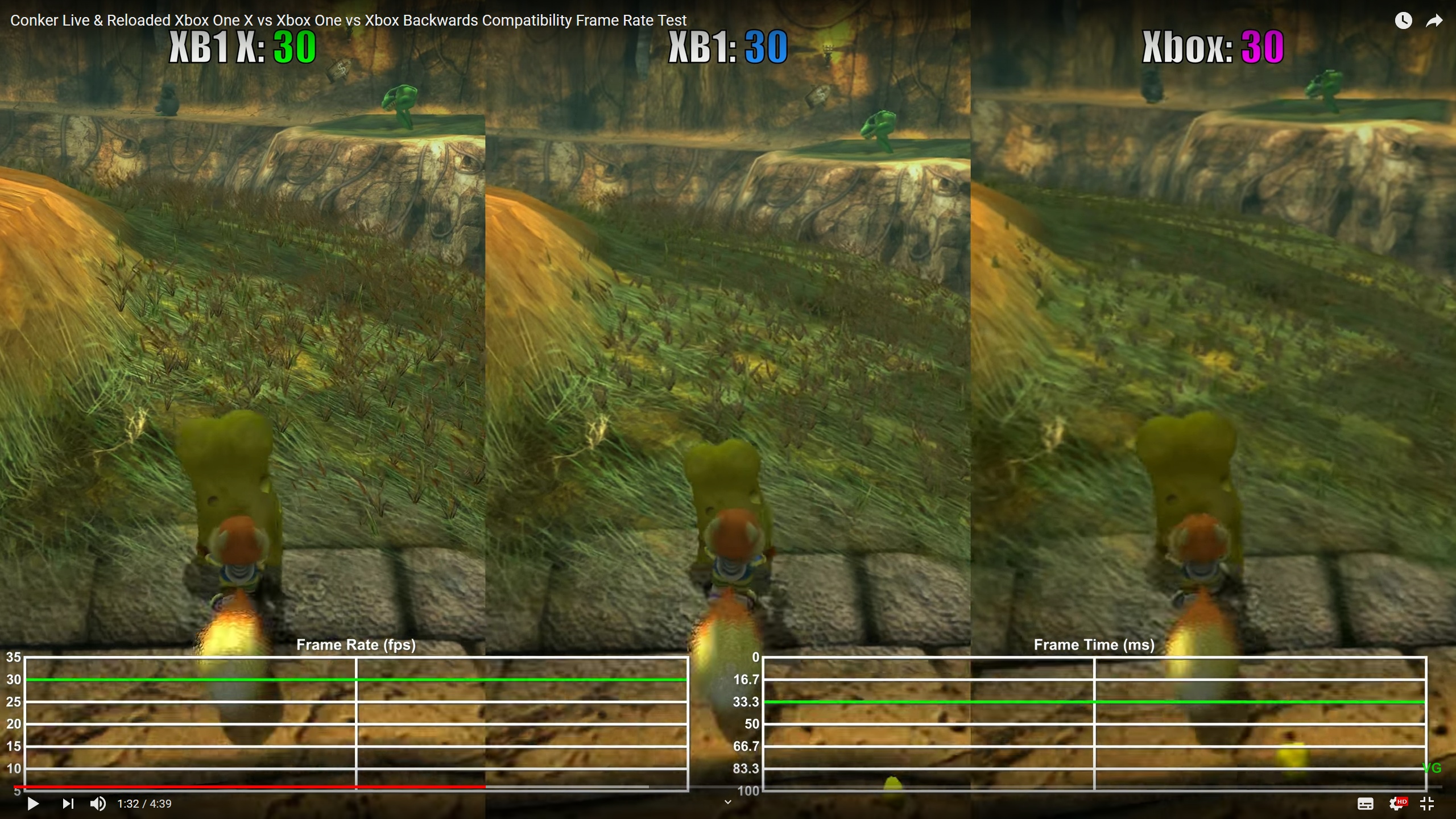 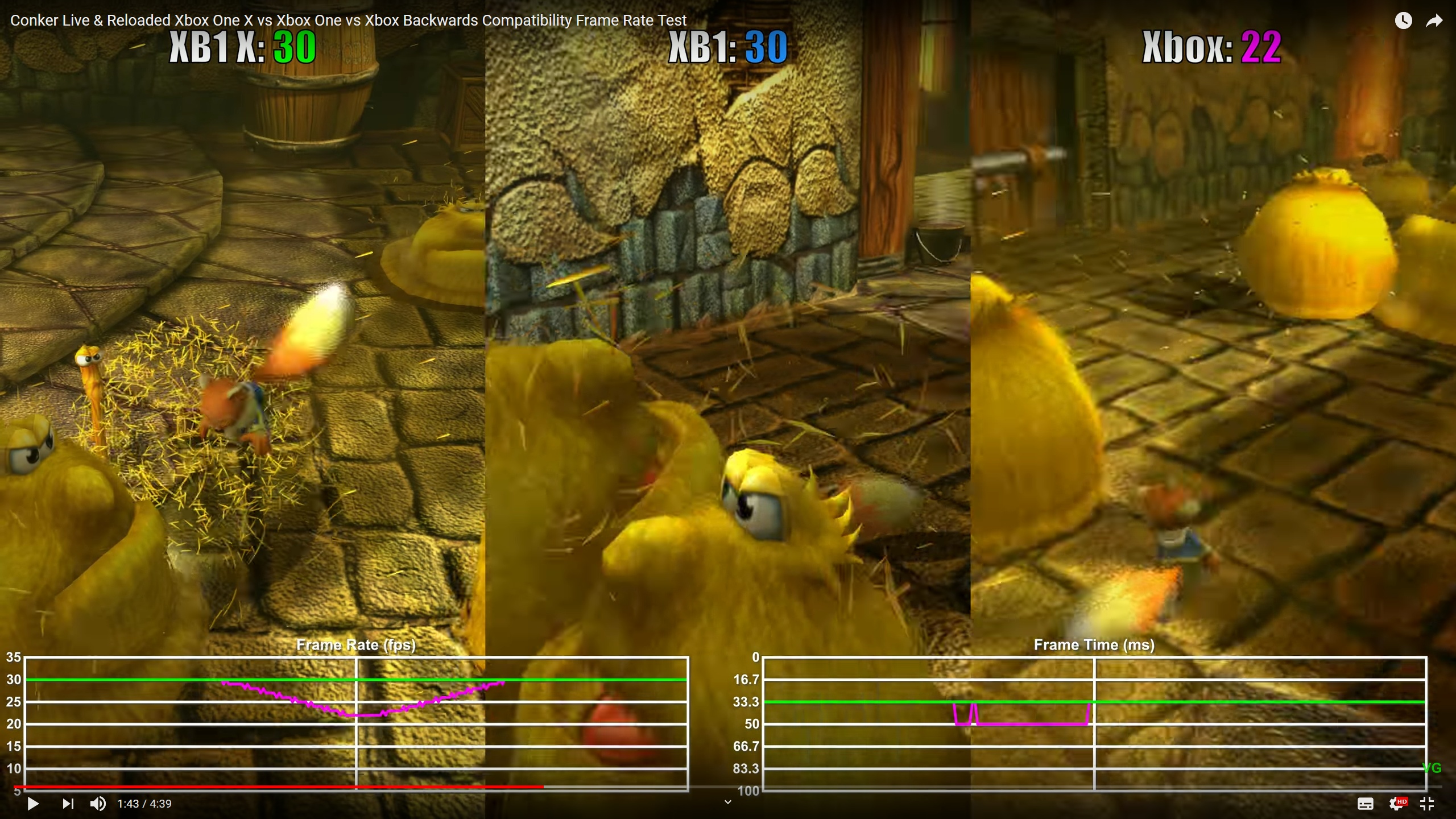 Ideally, an OG Xbox mini console would basically be X1's BC. Theoretically they could move that software to a cheaper hardware.

Maybe MS could just produce something a stripped down X1. Essentially the APU, RAM and flash storage for the games. Unless they can find a cheaper specs to get similar results as X1's BC. Maybe a Ryzen APU that could do higher resolutions, lets go crazy!

It would be more expensive than other devices but the games are more modern and HD. I would not suggest hardware that can only emulate at their native resolutions, that would be trash. I think X1 plays OG Xbox games at 960p, it varies.

If the collection of games is strong I would argue that's worth $150.