Did PS3 production end worldwide? I remember Japan stopping by that time (mid 2017).
Also if this is official it's time to get those extra 2M down from PS1.
PS2 numbers are too round to be real, those are estimates to me, it was at 153.1M units sold at 2011FY end if I recall if right.
Maybe that's it, those extra PS2 sales from its last year got combined with the PSP sales, so maybe that's why they estimated PS2 sales to 155M and PSP sales can't get past over that period as they lost reliability.
Probably 155.5M/82.5M (thus why they would round to 155M) or 156M/82M is my guess (not confident they can claim it sold 156M but still enterely possible. (PS2/PSP)

Is there any way to work the actual numbers out? 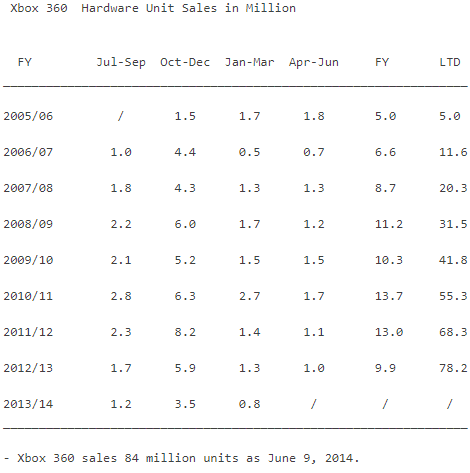 This is official information from Sony but it's also out of date.

Unaccounted units for PS3 and PS2 still yet to be added. Here is a stronger breakdown.

My guess is that once Vita is done for a few years, we'll probably get its info, as well. But, it's cool getting the official PS3 numbers, now. It definitely finished in 2nd.

I realise the tone may have come off harsher than it should have, sorry.

The topic is about the PS3, not all 7th gen consoles, and the poster in question defined what they were talking about: PS3 vs 360 sales.

I'm sure there is enough info scrambled on the internet to work out some math after this numbers, would be really cool to see someone dig deep into it to figure close estimates.

I can't find a date to when did Sony stop the production worldwide for the PS3, with new units still being sold last year here I feel like some countries had still a year of production or so going on.

Are you sure some of those unnaconted sales are also not from PSP?

PS2 higher than 157M doesn't seem too likely to me, 156M looks completely possible, tho, giving PSP its boost to the supposed 82M figure someone once reached. (Can't remember who)

I really hope someone can put all figures together now.

Zhugeex believes it shipped 4m after March 2012. I believe the PS3 had the higher share. But nobody really knows. Shipments of new units to Europe and Australia ended in March 2016, followed by North America which ended in October 2016 Heading into 2017, Japan was the last territory where new units were still being produced until May 29, 2017, when Sony confirmed the PlayStation 3 was discontinued in Japan.

The confirmed numbers are as below:

Now PS4 is at 96.8m, bringing Total Playstation sales to at least 540.9m, but probably a bit more with Vita.

Sony didn't give lifetime numbers even for some old consoles. Considering that PSV sales remain hidden under the rug and good numbers only were revealed, maybe this non-uniform reveal is a PR move to make more discussions happen and so get some more free publicity.
Or maybe it's because a non-uniform reveal makes it more difficult to deduce PSV numbers from previously revealed total Sony consoles sales. I always thought that the best measure to consider which was the best console of a generation was not how much console units a console sold but how many games/software it sold. In that regard, is really impressive how well X360 and PS3 did, both surpassing Wii, and both with the best ratio by far compared to the rest of consoles.

PS3 was a financial problem for Sony, no doubt about that, but as a gaming console, it was a juggernaut. In my opinion it still has the best/largest library of any PS system. The amount of new ip's, new first party games, goty game contenders that launched in that gen has not been surpassed in this one in my opinion. Just remember: Uncharted, The Last of Us, LittleBigPlanet, Assassin's Creed, Red Dead Redemption, Mass Effect, Batman Arkham, Bioshock, ... plus established ip's getting to another level like Call of Duty, Fallout, The Elder Scrolls, Far Cry, Battlefield, FIFA, NBA 2k, ....and of couse succeful old franchises like Resident Evil, Final Fantasy, Metal Gear Solid, Gran Turismo, Ratchet and Clank, Grand Theft Auto, ... still doing great.

I joke that PS3 was the most expensive marketing campaign for PS4, but it really was. Without Sony's effort with PS3 during 2009-2013, PS4 wouldn't have had started as good as it did.