Forums - Gaming Discussion - The PS4 Won The Console Generation By Being Boring: Can The PS5 Do The Same?

What is the foundation of this....philosophy?

PS will lose no substantial ground to Xbox. This site is pock-marked with people who refuse to even acknowledge that Nintendo is in competition with Sony and MS, so I'm not sure how to frame my idea on their role without inviting unwanted spam. Next gen will look very similar to the current landscape. There's no reason to think PS will tank due to a sustained series of poor software releases. Quite the contrary.

I happen to think there's an it factor that the PS4 and switch have but the xbone and Wii U didn't. Everyone tries to pinpoint one thing but it's this chaotic storm that blends everything in just the right way that something becomes the next 'it'. And when it becomes that 'it' the company has to do something very stupid to let it fall off after that. My belief is the first year is the most important in setting the trend for the entire console's life. People who claim switch will magically drop off are being stupid and people who believe any console will magically drop off or rise to the top are also not thinking clearly.

Of course it is about the HW.  If your HW isn't appealing, few will buy it, regardless of what games are on it.  Look at GameCube and Wii U as prime examples.

The thing is it takes three things to make a hit console. First, you must have appealing HW. This doesn't always mean in just terms of power. Second, you need an appealing price.  The more power you have, the more people are accepting to pay, but there is a limit (right now, $499 is the highest one should go.) Third, games, games, games. There must be appealing SW for your console, both from 1st and 3rd parties.

I don't really see Sony screwing up on either of those three things. They learned a valuable, long lasting lesson from the initial missteps of the PS3.

I'm not going to argue with your points--though I disagree with a couple. I just wanted to say that, last gen the gaming media kinda put "a hit" on the PS3. They loved bashing the console early in it's life. I think they sorta did the same thing with the Xbox One and the Wii U. Then, as time progressed, they were like "What have we done? We need to start praising them!"

Sometimes it's because a company actually fixed a lot of their issues but, from my point of view, not always. Early on, gaming media really bashed the Xbox One controller and praised the PS4. Now, most everyone praises the Xbox One controller over the PS4-- but it has barely changed. I have the originals and the newer ones. Aside from a headphone jack, I can't really tell if anything is different.

They did the same with the Wii U. The Wii U deserved the heat it got. I purchased mine on day one. It was near Xbox 360 levels of power and most games performed worse. The console had the worst 3rd party support you could imagine for a Nintendo console and the exclusives were good but lacking. Article after article would come out saying "You should buy a Wii U!" but by then, the damage was done.

It's like the media chooses the winner early on and then shapes a narrative to support it. But when things look too bad for a company, they swing the other way.

In my perspective and personal account, the media, retail companies and gaming outlets REALLY wanted Microsoft's Xbox One to be the winner - even after sales statistics and forecasts clearly showed that the PS4 was outselling the X1 two to one.

The X1 is obviously an American product (Microsoft) but E3's 2013 shit show DRM controversy totally f**ed them. I remember that demonstration, that whole keynote was about TV, Cable, Football and Kinect. Videogames was clearly an afterthought for Microsoft and everyone saw it. Microsofts stock took a dive and gamers crucified it's marketing pitch - which was completely justified. The PS4 is for gamers.

Bold: Media didn't push XB1 more than PS4 from my memory. They saw everyone's reaction to the XB1 reveal and often they decided that there was money in supporting the critical narrative. For instance: 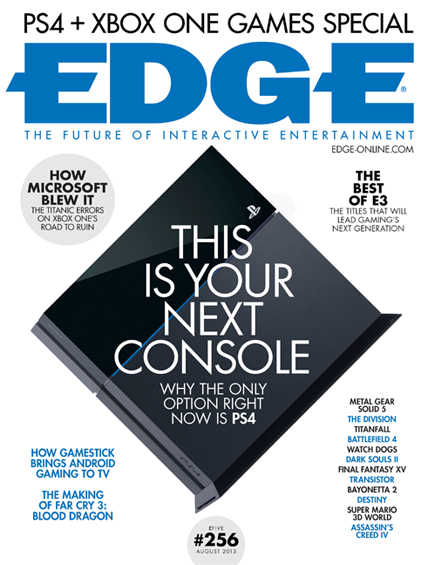 Though talking retail sellers (or at least Gamestop), I kinda see your point. Even here in Denmark, Gamestop has (almost every month since 2014) been begging me to trade in my PS4 towards an XB1 and later XB1X. Often they don't have (or at least don't advertise) the option to trade in my XB1 towards a PS4.

All things being equal, PlayStation ought to beat Xbox every time. Technically, they beat Xbox last gen as well despite the disadvantages the PS3 had causing huge reductions in market share. Beating Nintendo isn't always a guarantee, though. The PS3 fell well short of the Wii, while the PS4's final tally ought to exceed the Switch's by a fair amount. But so long as they don't do anything too risky, Sony ought to win every generation. They have Europe on lock, and the PS5 ought to keep Sony's streak unbroken in the region. The U.S. is always going to be up for grabs, but if they play it safe they ought to at least break even with Xbox. As for Japan, the PS5 ought to do similar numbers to the PS3 & PS4.

If I had to guess, assuming the PS5 and Xbox 4 are on even terms and neither Sony nor MS make any huge blunders, I think a plausible scenario for Gen 9 is 100M for the PS5 and 70M for the Xbox 4. Now we just need to wait a couple of years to see what Nintendo has planned for the Switch's successor.

I feel like PS4 has been the least boring console, given Sony’s financial situation prior to launch, and the number of risks Sony has taken by putting emphasis on single player games, changes to IP’s, and VR. Sure, it didn’t launch with motion controls or a camera that supposedly needed to be plugged it at all times, but it’s been a genuinely good gaming console that offers people what they want: Games. It doesn’t need a gimmick to be considered “exciting”

It does have an awesome motion controller and a touch pad, though. And let's not forget it lights up. I'm not being sarcastic. In fact, not that I think about it, they launched with a camera too (though it wasn't a necessity, as you stated). It was sold out for a while. They just didn't make it a pack-in. It even had decent voice commands.