Yeah, I just watched it too. I was expecting it to be full of bullshit, but instead, it wasn't really full of much. Just some guy making bad jokes for ten minutes between news article quotes. I don't really take much of an issue beyond what you said. He seems to be trying to have his cake and eat it too, like trying to argue that the US will be hurt economically if we stay in the Paris Agreement, but nothing will actually change in terms of emissions if we don't, invalidating both points. Not really worthy of a "wake up sheeple" kind of post...

This is why Trump supporters are viewed as terrorists.

It's a miracle these fuckers didn't try locking them inside and burning the building.

Meanwhile, the Arizona GOP is calling on their supporters to fight to the death against supposed election fraud. 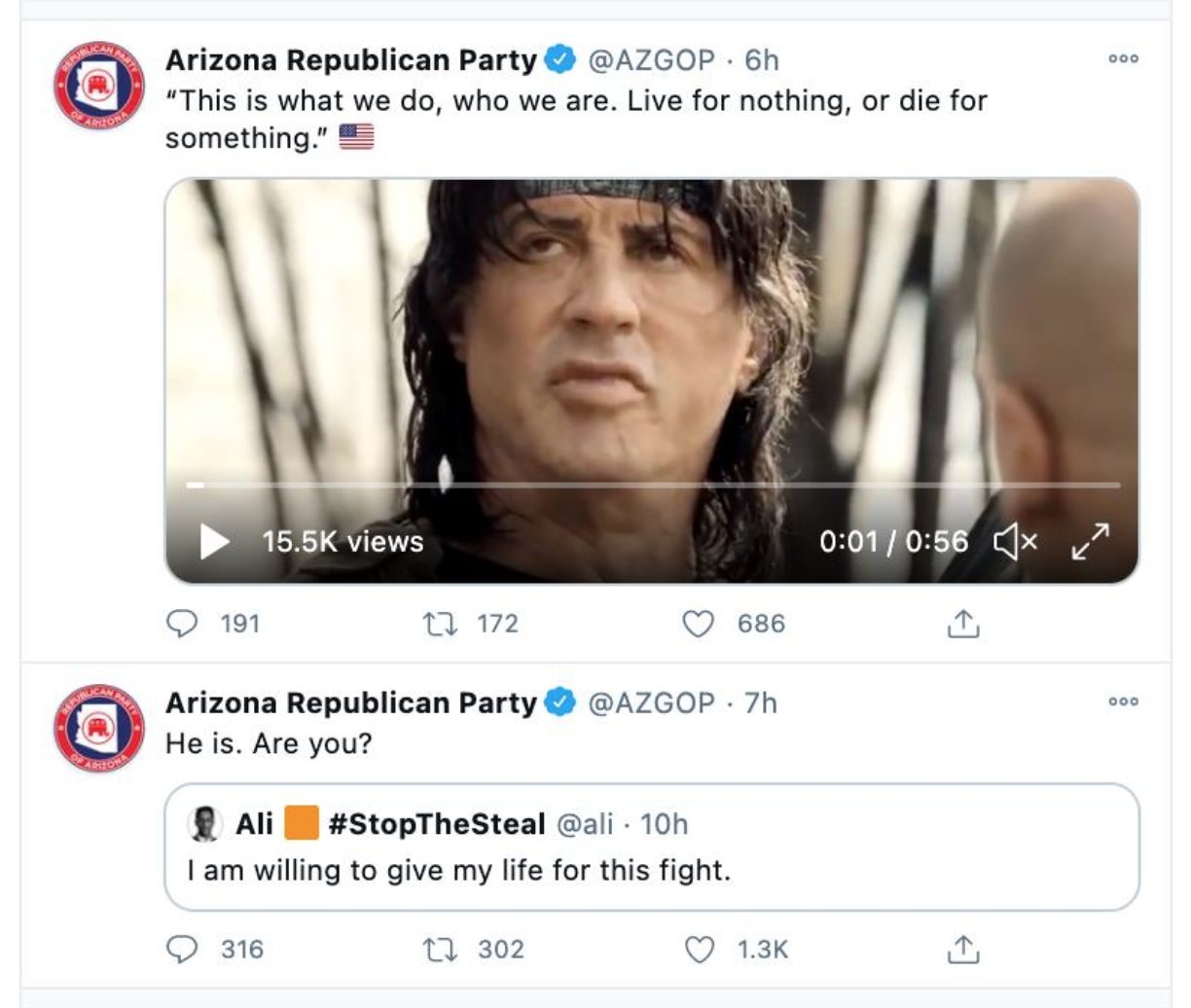 Further proof that Trump was put in power by terrorists.

They are Republicans, so they chose to live for nothing

Does it surprise me? Of course not. Maybe you'll watch a second, third and fourth time,

i remember when i started participating in "Politics". I mentioned my fundamental apolitical attitude. Still am, never voted in my life, never will. My world view won't allow it. I'll certainly won't elaborate. Pearls before the swines.

When i see how crooked you people become. I get a ban +1week because and i quote:

Posts are nothing but flaming with no intent to engage in any real way. This is not your platform to rant about how much you hate the left.)

...even though i point out extremists and radicals. Even though i barely post, and far from being "my platform" (what nonsense). But its ok when people making the accusations are actually the one continously ranting, condescending and making the board into their political megaphone.

Your hypocrisy disgusts me. But what to expect from people who openly condone left extremism and take a liking to radicals.

Just a centrist (or maybe even classical liberal) who spends all his time deriding the "extreme left" and talking about how voter fraud is possible after it loses court case after court case. Alright, Dave Rubin. I look forward to when you can admit to yourself you're just a conservative.

They live for themselves. That's just what the republican platform is all about. It idolizes the self, it focuses on the individual, and there seems to be an overwhelming disdain for anything that would help the greater good, the planet, or the underprivileged. Why do you think I dislike the platform as a whole? It's an inherently selfish political stance.

I liked it better when the left and the right found some middle ground and both had some good points. At its core, left wing and right wing policies need to be balanced and both have their place in the world, but lately it's clear that modern conservatives hate social or scientific progress, hate change, and actively resist any policies that might minorly inconvenience them if that means some of their taxes goes to helping others (in their mind, selfish people, lazy people, etc). I had my one friend rant at me for hours about how much he hated liberals simply because he didn't like the idea that his tax dollars would go to giving some welfare bum money, regardless of how many people social services actually helps; the chance that his money could go towards a cause he deems inappropriate or charitable was enough for him to demonize the left in its entirety.

If you're apolitical and just hate radicals how come all you do is parroting the radical right?

It would help your case if a single of your posts had any substance, instead all you do is scream radical rightwing buzz words into the void. You never explain yourself because you seem to know that behind your words is nothing to back them up and they fall apart the second you look just a little closer. It's exactly what every single radical right wing pundit including the current President does.

>Does it surprise me? Of course not. Maybe you'll watch a second, third and fourth time,

And yet for some reason you have decided not to try pointing out the point of the video.

And no, the video has no point. It is just a variety of articles.  It doesn't say anything about climate change. Pretty much the only argument is that somehow the Paris Accord does nothing while somehow detrimental to the US.

Every leftist knows the Paris Accord doesn't do anything by itself.  It's about the US being involved in the conversation and at least attempting to make improvements.

>I mentioned my fundamental apolitical attitude.

You aren't apolitical.  People that are apolitical don't post in political threads, or criticize political positions, extremist or otherwise.

Not aligning with a political party isn't the same thing as apolitical.

A centrist who exclusively criticizes one side isn't a centrist.

Don't mistake your lack of interest in being involved with government as apolitical.  It just suggests you're a libertarian or an anarchist.

>When i see how crooked you people become.

So, you're trying to use another mods ban on you.  Something I wasn't even involved with, as proof of me being crooked and hypocritical?