Well it's not some finely crafted press release, it's an interview with a competitive guy who's having some fun at the expense of his rival and their seemingly pointless next round of hardware.

Doesn't come across as salty to me... almost seems more like a victory lap from a guy who knows what's coming.

And certainly the margins are thin. But it grants a stable and good revenue stream. And just on the money flow it creates a lot of leverage and gain of scale that they can use to finance other technologies and recover their position (AMD).

As console customer, knowing they won't make a 2000 USD box, I rather they get the best possible GPU under 200 USD cost and with the CPU and GPU into a single chip they gain a little more on the cost for best performance per money expend.

Uh, what? The Ryzen 2700X is almost certainly better value for money than a 9900K, but the latter is pretty decisively ahead performance-wise.

If you're talking about the new third-generation Zen chips they announced, I think it'd probably be best to wait until there are benchmarks from someone other than AMD themselves before making that sort of claim.

Only 25% improvement at the same power according to AMD themselves. And since the performance improvements compared to the Vega64 are more than 25%, I doubt that it will consume less power than the Vega64: 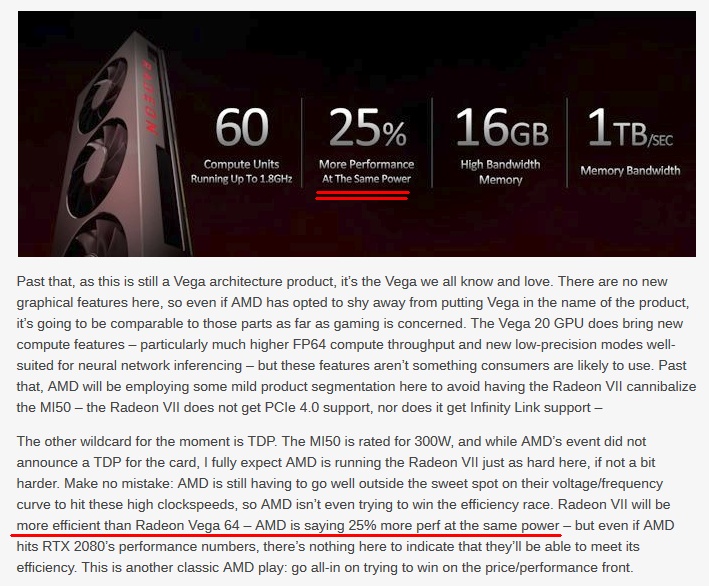 I think most people didn't actually watch that presentation or don't fully understand the Radeon VII.

The Radeon VII isn't just a Vega in 7nm, as it improves far more than just the clock speed. The clock speed increases by 10-15% while framerates increase almost throughout by 20-35%, and that's despite lacking 4CU. That brings the card to about RTX 2080 level in terms of FPS.

However, this Radeon is more of a Prosumer card like NVidias Titan line originally was. The latest Titan however has those capabilities locked in the Driver to force those interested in this to shell out for a Quadro or Tesla GPU. For anybody who uses OCL or FP64 and can't afford any of these professional GPUs this card is a godsend.

I can understand that from a pure gamer standpoint the GPU is disappointing, but for those Navi will come later down the line. But for those who use their GPU not just to play, but also for work, this is a very good offering.

I actually wish AMD would put up a better fight. I'm happy to splurge on $1000+ graphics cards, but when we start seeing $2500 >single< GPUs not in the Quadro field, it is obvious that they are selling it that high because, well, they can. Sure, I'm in a different tier as a high-priced buyer, but even we know that there is a limit to this stuff.

That said, Jensen is FAR from salty here. More like beating his chest ~ knowing, yet again, they'll have the PC gaming market cornered. Plus, this tells me a new console generation is close, as NVIDIA openly attacked AMD just prior to the release of the PS4/XB1.

Yes Im not talking about the 2700x but their upcomeing 3000 series of ryzen chips.

Anyways gaming is where Intel has the biggest lead and even here its like 8% differnce:
https://tpucdn.com/reviews/Intel/Core_i9_9900K/images/relative-performance-games-1920-1080.png

the 3000 series of Ryzen will beat out the 9900k in gaming benchmarks too I suspect.

I'm not seeing the logic here. What is he supposedly salty about?

This is just one of many reasons why I dislike Nvidia. Yes, it's kind of sad that it took a die shrink down to 7nm for AMD to match or slightly exceed Nvidia's 12nm GTX 2080, but that is no good reason for Nvidia to trashtalk AMD. I like people and companies who are humble instead of those that gloat and trashtalk. And this is just one reason why I dislike Nvidia, I also dislike them because of their practice of designing tech like PhysX and Hair Works specifically so that it will have trouble running on AMD cards, and then moneyhat developers into using that tech in their games, effectively handicapping AMD cards in those games (and the consoles since they use AMD APU's). It is one thing to moneyhat an optimization deal where a dev spends more time optimizing for your cards than for your competition's cards, both AMD and Nvidia do that, but it is another entirely to pay a dev to handicap the competition. It is because of underhanded tactics like that that I will never buy an Nvidia card again, even if they are technically superior to AMD cards in some ways.

In the end, AMD gets the last laugh, it's looking like they got the contract for both Xbox Scarlett and PS5, so that is basically 160m+ APU's they just sold next gen.

It's possible that Xbox Scarlett Anaconda will use a cut down version of this with a few less cores and with GDDR6 instead of the more expensive HBM2 I suppose, but even then it might be too expensive. Radeon VII offers roughly RTX 2080 tier performance for $700, while the top end Navi GPU, the RX 380, will supposedly offer GTX 2070/Vega 64 tier performance for $250. That is a huge price difference, and I can't see MS having a massively higher launch price on Anaconda just to get a measly 15% performance advantage over PS5, at most Anaconda will be $100 more than PS5 imo.