Its not bad at all 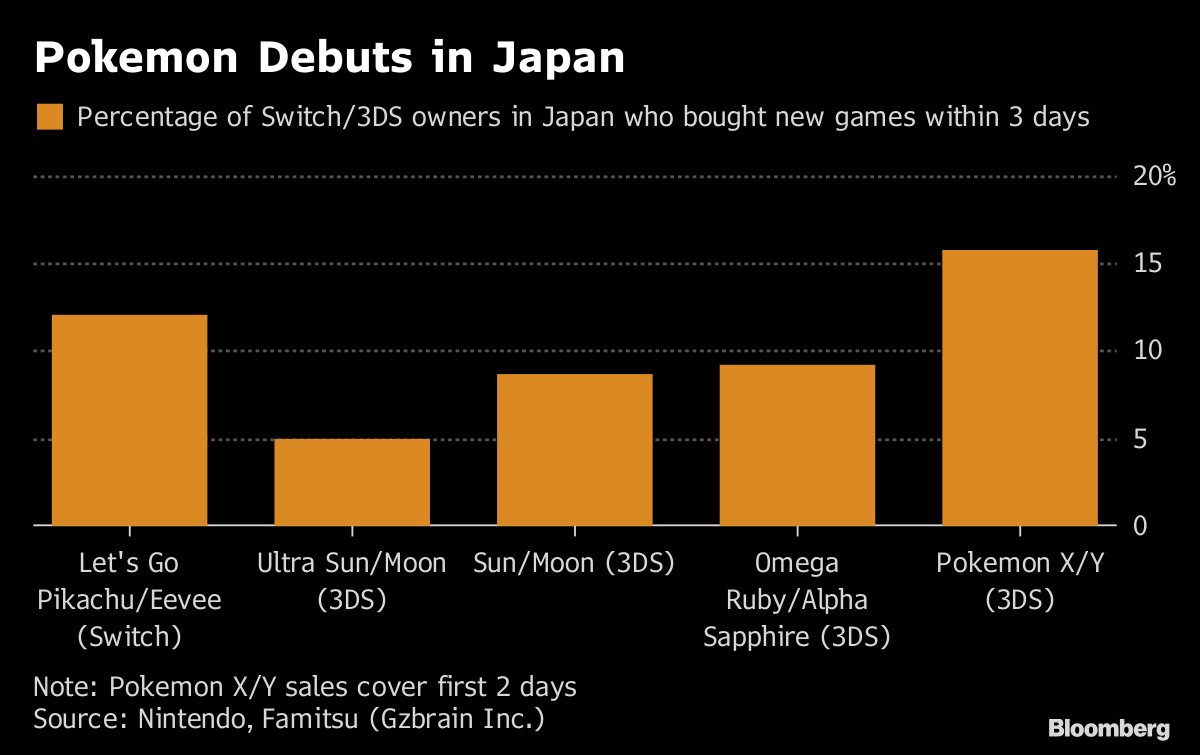 Thought this was sales and was very impressed, then saw it was attach rate... And thus heavily in favour of let's go. Garbage graph!

Regardless it's done very well in Japan.

Why is garbage graph? This graph very clearly shows attach rate of Pokemon games on launch.

Because attach rate is a metric that favours lower install bases it's a pointless comparison.

Basically it's not a graph that can be used to draw any meaningful conclusions. Attach Rate can't used to compare the success of a game.

Attach rate can be used determine how much some game is popular on some platform, point that 12% of Switch owner already bought this Pokemon shows that its quite popular on Switch.

This is one of the greatest things that I have ever seen.

To be honest, Let's Go is essentially a remake of Yellow. It has more content than what was in Pokemon Yellow. Saying it is essentially Sun/Moon makes no sense, as it is not based on those games (although it has some references to those games). I am very curious as to how much you actually know about the game based on this statement alone. To reiterate: Pokemon Let's Go is a re-imagining of Pokemon Yellow, something that has even been stated by Nintendo.
Sure there are other Pokemon games that have more content, there are also others that have less.
Your argument could be used for many Pokemon games. After the release of Gold/Silver, they followed the next generation with Ruby/Sapphire. Ruby and Sapphire only featured one region and abandoned the day and night cycle. The audacity Nintendo had to charge the same price!

I didn't say anything about people believing me, though you're in denial if you don't believe the facts I presented that my opinion is based on. You can disagree with my opinion if you want, that's fine, just like I will disagree with yours.

Okay I'll take back what I said, while I obviously don't agree with less being more, that is a fair opinion, and naturally one with that viewpoint would think Let's Go is the best Pokemon game in years. That opinion isn't any more or less correct than the ones of those who subscribe to more being more logic however.

Essentially does not mean literally, and Let's Go literally is a remake of yellow, not essentially one. That it's a remake is exactly why my statement is accurate, it is still a mainline Pokemon game at it's core, just with far less than it's predecessors. Obviously the latest Pokemon games are the standard for comparison, and even previous remakes were up to date with all the latest Pokemon, features, etc. Your Ruby/Sapphire comparison is kinda silly as that game was heavily criticized, but at least it brought a wealth of new content, mechanics, features etc. that moved the series forward overall.

Breath of the wild had over 100% attach rate for the month it launched. Mario Odyssey didnt achieve that but it still outsold BOTW.