Did a quick research and I believe those are fake, at least some of them

- Our album on spotify https://open.spotify.com/album/56mEbEgyBYGzcDyZ1eMQ1v?si=hYKgir5YRSCrzywgGmV4oQ

Coubl be, the first two do indeed seem pretty odd.

Anyways, whether you agree with her or not, it's not hard to see why some people would dislike her, she regularly makes rather bold and provocative statements.

Yeah, I haven't heard much of what she says since I have a bad habit on reading activists and getting mad even if I support their cause. I checked the anime one and the Iwata one and I couldn't find the twitt and there were some twits that said there was a fake account making them which wouldn't surprise me either.

I decided to Google these too, now that you mentioned them.

1) The tweets about Satoru Iwata are fake (the second one is more than 140 characters long, and at the time Twitter's max was 140 per tweet)

2) The tweet about anime is fake. It's way, way longer than 140 characters too.

3) About the "there's no such thing as sexism against men" tweet, she clarifies right in the next tweet: 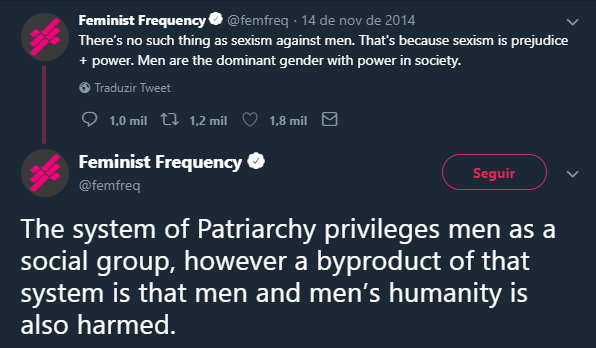 Meaning that, while her definition of sexism can only be practised against women, she understands that the sexism against women also harms men. So she basically said what everyone knows (that sexism hurts both women and men) but phrased it weirdly.

4) About the "mass shootings being always committed by men" tweets: She has a point. I can't think of a single female mass killer. Maybe not all mass shootings are due to pressures on men, but a lot of them have to do with the shooter not being able to get laid, or not being accepted as attractive by girls, etc. (aka toxic ideas of manhood) because men are expected to do that, and society punishes them when they can't. Terrible timing, but that's just the internet. If you don't talk about a topic while it's still relevant, your tweet will also not be relevant.

5) Segregated classrooms: Yeah, she vaguely cited "many studies" without mentioning even one of them. Pretty shitty of her.

On her twitter or feminist site page it said in big letters TRUST NO MAN .

She twists truth's and digs up things from long past to prove her points in today's society.Every critic with another opinion than her and even the polite ones she is vile against and goes on to label them as rape apologists,sexists,supporters of the patriarchy and so on.

Outside of her misleading youtube-channel she's an extremist and i do not support any.

The truth is, she is a scam artist. You can find videos pointing this out. From being in a vid promoting a scam artist showing others how to scam people to admitting in another video that she's actually not a gamer and had to do a lot of research to start bitching about the "wahman hate" in video games. But, SJWs eat this shit up, so they promote her and pay her rent through Patreon. All this makes it even more pathetic when you actually see real game devs come out and support her and giver her BS awards. Personally, I'm trying to make it a point not to support any dev who supports her, which is why I will not be buying TLOU2.

I didn't dislike her either from watching her videos, but the stories about her from other people who have interacted with her is alarming to say the least.

Had no idea who she even was, until now.

Interesting. What is an SJW? I am curious about what your definition of someone who blindly follows her videos is.

She is politely expressing her opinions while deliberately hiding facts that contradict her point. Yes, classy woman.