Forums - Gaming Discussion - What is your gaming history?

I first learned about video games at about 6 years old when a friend at school invited me over to his house. I played on a Commodore 64 and immediately started asking my parents for one, which I eventually got. Here is a rough timeline of systems, not including hardware revisions e.g. PS2 Slim, GBA SP.

Somewhere around 2000, I got my first mobile which could play simple games and I've had several others over the years which I've used for gaming but I couldn't be bothered to remember or list them all. I also haven't listed any PC after my first, since I have never been much of a PC gamer and it took me about a decade to replace that first one and even now I have an outdated PC that is really only used for FFXI and some old games from GoG.

But hardware is only part of the story. There are some key games that I consider milestones in my gaming history.

The first is Pipeline, a C64 game that is the first game I remember playing, funny that it says fast loader in the corner. I don't think I'd ever seen that, but I do remember that it was one of the faster loaders on an incredibly slow machine like the C64. I don't think it was the first game I played, but it's the first I have a memory of when I got a second hand C64 with about 60 games at the age of 6-7, I thought the guy looked like Mario. There were other memorable C64 games like TMHT (yes Hero Turtles in the UK) and Dizzy the Egg games, Blinky's Scary School....and of course Samantha Fox Strip Poker but I only saw that one in a C64 magazine (I also had a huge stack of C64 magazines and demos which are all long gone now)

When I got the NES, the first game that really stood out to me was Duck Tales, and then a bit later, Kirby's Adventure which I still consider one of the best games ever made. Gargoyles Quest II is another memorable one.

Barcode Battler is the butt of some retro gaming jokes, but for me, at the age of 10 this was revolutionary, I could get warriors, weapons and items from just ordinary barcodes....and so began the destruction of everyday product packaging and even....NES game boxes to get those barcodes (Pogs also claimed a few NES boxes when I got a Pog making machine and desperately wanted that HUGE Nintendo Seal of Quality from the Duck Tales box). As far as I recall, I only got a handful of decent characters or weapons from these plundered codes. But aside from that, the gameplay was oddly addcitive for me. It was turn based and revolved around character stats and defeating enemies to improve those stats until I was strong enough to conquer the entirely text based game (I did use the manual for some context as to who I was fighting). This was my first introduction to RPG mechanics, in fact when I first played a proper JRPG, my first thought was "oh this is like Barcode Battler".

The SNES introduced me to Mario, I knew about him earlier and even had Mario Bros on C64, but this was the first time I played his platform games with the Mario All Stars cart. I probably had close to 20 SNES games, but the biggest thing the SNES did was introduce me to the DKC trilogy and Mystic Quest (my first Final Fantasy game but I didn't know it since the FF name was dropped in the UK). About 5 years after the life of the SNES I hunted down more games like Secret of Mana, Secret of Evermore and Terranigma which I also enjoyed. I also played Wolfenstein 3D which I though was terrible and put me off FPS games for a few years.

When I got a Mega Drive it was mostly to play Sonic (which I'd played years before at friends houses and one time in hospital) but although that became a firm favourite, I was also introduced to Phantasy Star which helped further my interest in JRPGs. It also gave me Worms and Streets of Rage which are still some of my favourite 2 player games.

The Saturn was a major leap for me, games like Sega Rally (which I had previously played in an arcade), Panzer Dragoon and VF2 were the first time I was actually impressed by 3D graphics.

When I got a PC, I expected it to offer graphics like Terminator 2, Jurassic Park, Toy Story, DKC promo CG or other CG demos, after hearing how much more powerful PCs were and how all this CG I was seeing was being created on 64 bit PCs. So I was a little let down initially to see games that looked maybe slightly better than my Sega Saturn. However, that was still pretty good and I enjoyed several games like Command and Conquer and Outpost that introduced me to the genre of RTS games. POD built on my interest in 3D racing games and introduced me to the idea of online mutiplayer gaming. Dark Earth was...weird but I forced myself to like it, Galapagos was even stranger but the unique idea seemed interesting. Ultimately I gave up on PC gaming as I saw many of these games on consoles and at the time the PC was just awkward with so many incompatibility issues (and DOS) that threw me back to the hassle of C64.

The PS1 and N64 helped grow my already existing love for platformers and JRPGs (especially JRPGs) with games like Mario 64, Banjo Kazooie, Spyro, Final Fantasy 7/8/9, Saga Frontier II, Vagrant Story. This was also the time when I started buying games myself and also expanded my interest in finding out more about games in general. So I bought games magazines regularly, started using the internet and stayed up way to late to watch videogame shows at 2AM. Lots of my favourite games come from this time period. The N64 also got me interested in FPS games again, with Goldenye.

I could go on but I'm getting sick of writing this, so I'll summarise and say, every system since has offered so many real classics but have mostly just given me prettier versions of what I discovered on these earlier systems. They have expanded the services around gaming though, things like digital stores, subscriptions, patches, dlc, streaming, cross play, cross save and widespread online features can all contribute positively in some cases. However, in 2016 I got PSVR which was the first time in a long time, that I felt like I'd experienced a huge leap in gaming. I'm still happily gaming on PS4 and Switch and look forward to the next generation.

I still have my ColecoVision, and ColecoVision "game center" which holds the console and 30 cartridges. I have around 50. The game center thing still has poofy plastic A-Team stickers on it. Mostly Mr T. That's where I started in 1983, right before the crash.

I think that's everything, and in order. I had a small amount of small "electronic gaming devices" as a very young pup too. The Mattel Football was the best.

I will skip on games played at friends home, Arcade or videogames stores.

I started gaming in 1988 when I was 7 years old, I and my brother asked for a NES for Christmas and fortunately Santa Claus got the message :)

Yeah, I did the same, but had A LOT of experience with the 2600, and to a slightly lesser extent, the Intellivision. The Coleco TelStar got some time too. I also fell in love with the Vetrex at a couple kiosks on family vacation. I still want one. It's the only old school system I'd still like to buy to this day. There were other systems too. The Vic 20, and another oddball system I can't remember the name of. It had a Pac-Man clone called either CK Crunch? or KC Crunch? but I shockingly can't find info about it on google.

Got a little teary eyes from my own nostalgic, bittersweet story there.

I must’ve been in a hurry though because sadly it’s full of grammatical errors but oh well. Nothing much to add a year later though, except that my Switch collection is growing steadily and it might end up being high up in my personal list of favorite systems when it’s all said and done, and PC finally had a few games again that made it worth my while.

I didn't play much on systems before the NES. I remember playing some Mario Bros and Pac-Man at a friend home who had the Atari 2600 the same year I got the NES. Also I remember the C64 with Lode Runner and Wonder Boy, played at another friend home, and the Game&Watch "Climber" played at school, it was such a fun portable game at the time! :)

So my new OLED-4K-TV is the perfect companion for my PS4 Pro, Xbox One X and PC, which can display on it games, movies and TV shows up to 4K, with HDR or Dolby Vision; PC games up to 120 Hz and with variable refresh rate. The PS5, Xbox Scarlett and Switch Pro can come, all is set up for them.

Thanks to a generous gift of my best friend (the Christopher Nolan Collection another a 4K-box with 4 movies) I already have over 25 UHD movies... okay, since we watch most movies together anyways, that gift was more symbiotic than altruistic. My Netflix subscription is upgraded to 4K content and Amazon Prime also has some nice 4K content.

Meanwhile my trusty old 3D-TV, which gave me and my buddies thousands of enjoyable hours of console gaming, hundreds of Blu-ray 3D movies and over 1000 Blu-ray movies, has found a new home in the bedroom. I still love the stereoscopic 3D effect, especially in animated movies. In its new place, that 3D-TV (which still has gorgeous picture quality) is the perfect companion for my Wii U, PS3, Steam Link, PS1 Classic, C64 Mini, Blu-ray player, HD-DVD player and Fire TV.

The Wii U can play my favorite VC-games (SNES + N64), Wii games and Wii U games. The freshly cleaned PS3 Fat lady is now a lot quieter and can play PS1, PS2 and PS3 games. The Steam Link is connected to my main PC, but gets rarely used. The PS1 Classic is modded with Autobleem/RetroArc and can play a lot more games than the included 20 PS1 games. And the C64 Mini is compatible to any C64 games thanks to the lastest firmware update. 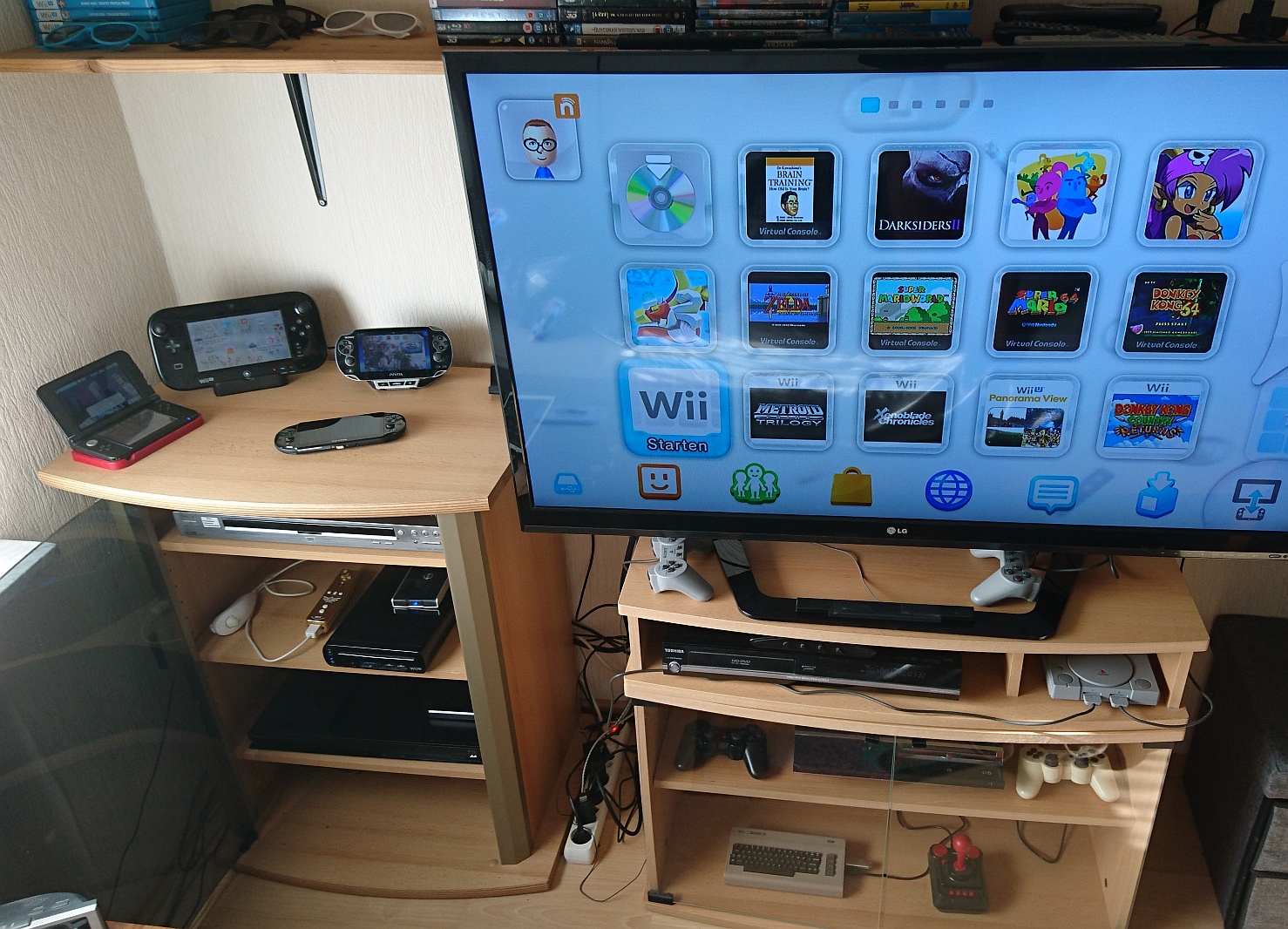 After upgrading my PC, getting a new VR headset and sending back the Xbox Series X (disc drive was noisy), I'm trying to use a new form of visualisation.

The left side shows my computer upgrades (my last CPU and GPU aged much better than the older ones): 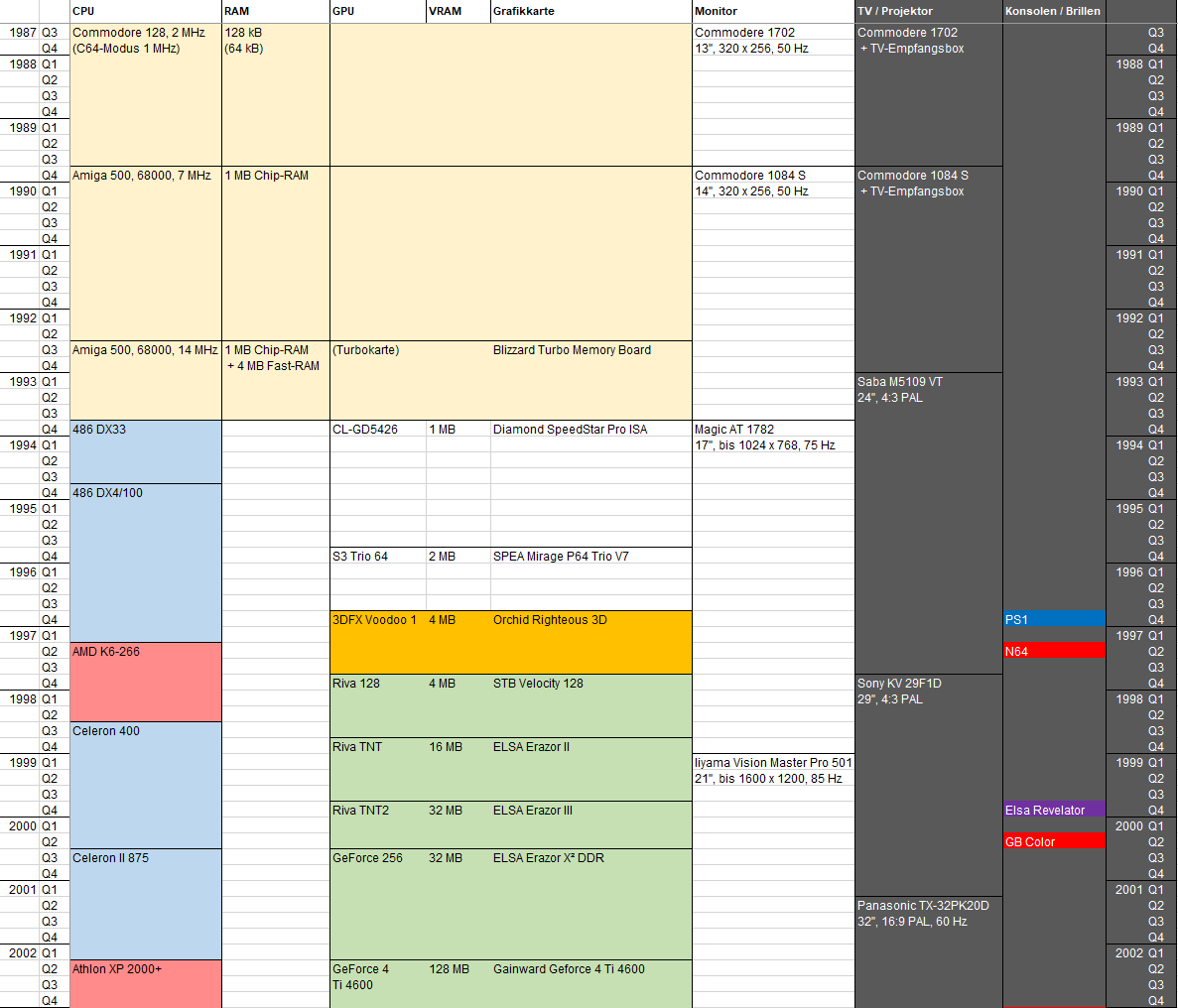 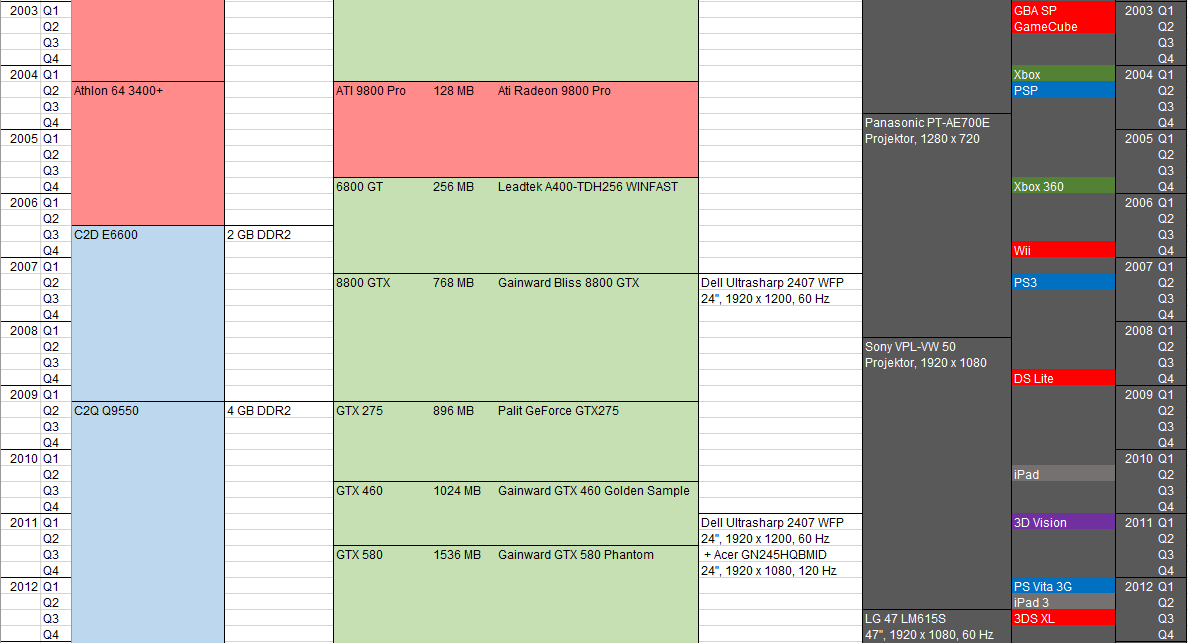 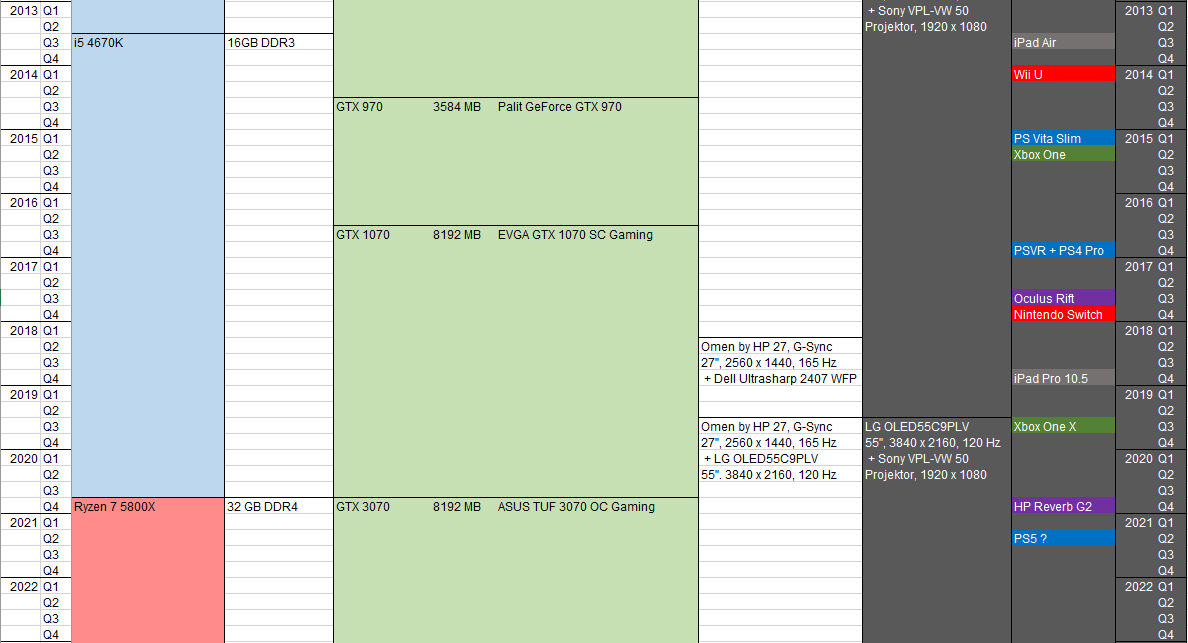 The right side shows when I got my other gaming related hardware (TVs & projectors, home consoles, handhelds, iPads, VR headsets...)

PC gaming history would be too long to list :P