Sure, from the left's perspective it's all bad because they need him to fail but to everyone else, here's doing good. I already replied with a list to another user.

Yep. You nailed it.

Friedman would like to have a talk to you and show that there wouldn't be "cycles" if government weren't fucking around the economy so often.

The more the left beat him the more power he will get.

I don't even like him and most of what he says. But I respect his resilience to the media sillyness but get sad that because of that a real classic liberal minarquist candidate can't get a place on the election for the Republicans. So I accept what was available, Trump less bad than hillary.

A few comments, how many Americans here have taken part in a Presidential Poll, ever? Another thing I have an issue with is why polls vary so widly. One will have a +1 Disapproval and one will have a +15 Disapproval. Finally, some polls only call landlines. That in itself is a joke. Which poll can be trusted?

Don't post that.  It flys against the narrative that Trump didn't inherent a good situation from Obama. I feel like folks just try to make up whatever reality they want.  Its easier to do good when the last President had you on track to do so.  Its harder to do what Obama did and resurrect from a recession.  Please Trump, don't squander what you have been given.  Please.

You are right nothing has changed.  He is still the griffer he has always been but do not sit there and act as if the people who voted for him see him that way.  You only have to go to a conservative site to see that the narrative is much different.  I have a few friends who voted for Trump and still support Trump and you can believe they do not see him for what you suggest.  They never did any research on Trump.  They believe every word he says without question and will not hear anything that contradict their view.

I can respect if people actually did say that Trump is the scum that they like compared to other politicians.  If they understand who exactly they voted for instead of some upstanding outsider who is going to change washington then at least they are not putting their thumb in their ear and toning out anything negative against him.

Outside of my dislike of habitual liars like Trump is I also feel he is an idiot.  He doesn't have a clue what he is doing and just winging it.  Why would anyone want the village idiot to run their government.  Everything Trump has touched in his past has turned to ashes.  Just look at Trump history.  If anything he has successfully done is market himself but who the hell want that person as President.  When you have people within his administration leaving left and right because he only listen to his own inexperience voice, why would anyone want him making decision on his gut when you look at his past failures.  It's not like he learned anything from them besides how to make banks never give him a dime unless its one laundering money.

Who is this everyone else.  Is everything always left or right.  Can you run down that list again, I do not plan on arguing any of the points just wondering what I am guessing you being on the right believe Trump has accomplished.

These are not net numbers. Job participation was declining from 2000-2015. 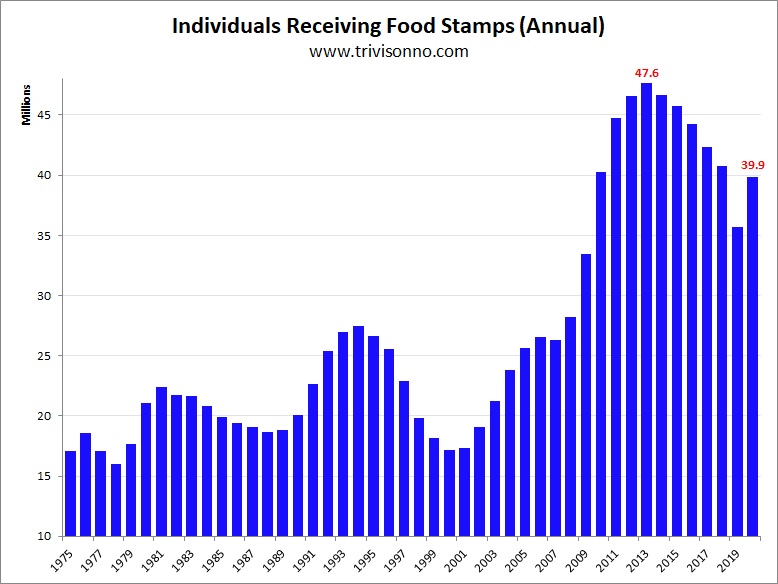 What exactly are you trying to prove with the food stamp chart?

The reason why job participation fell a few points is because baby boomers are retiring.  Please stop the scam or at least try to understand the context you numbers are coming from.

And since people are living longer job participation has to go down because the birth rate is also going down.