Still no Navi GPUs in the August survey :( 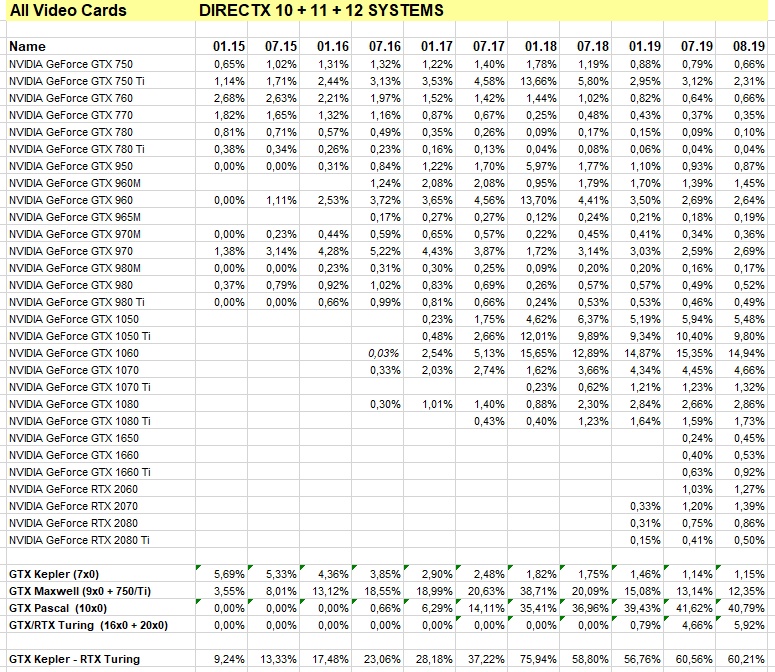 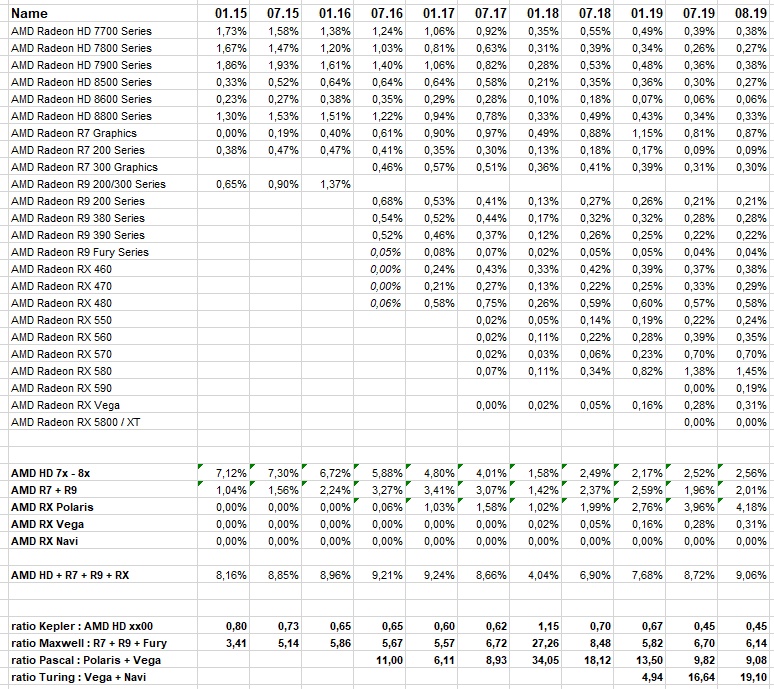 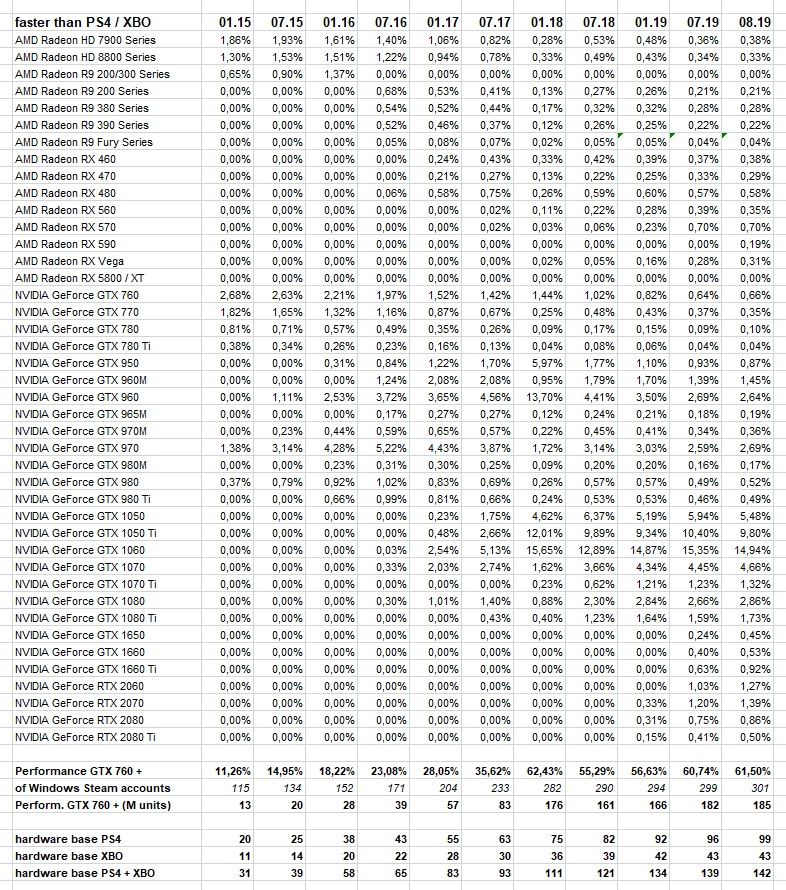 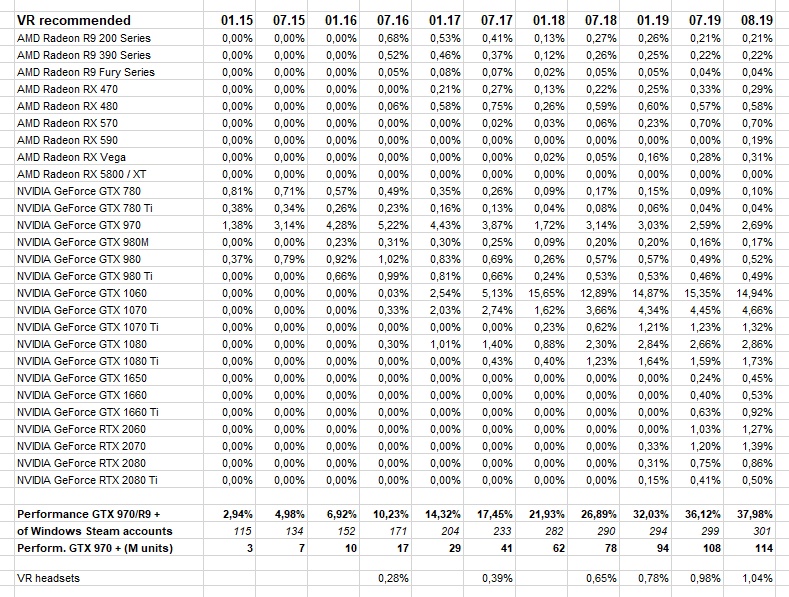 I'm Super, thanks for asking!

The first "Super" GPU entered the Steam survey... the RTX 2070S. I would have expected to see the RTX 2060S first, but that will show up probably next month. 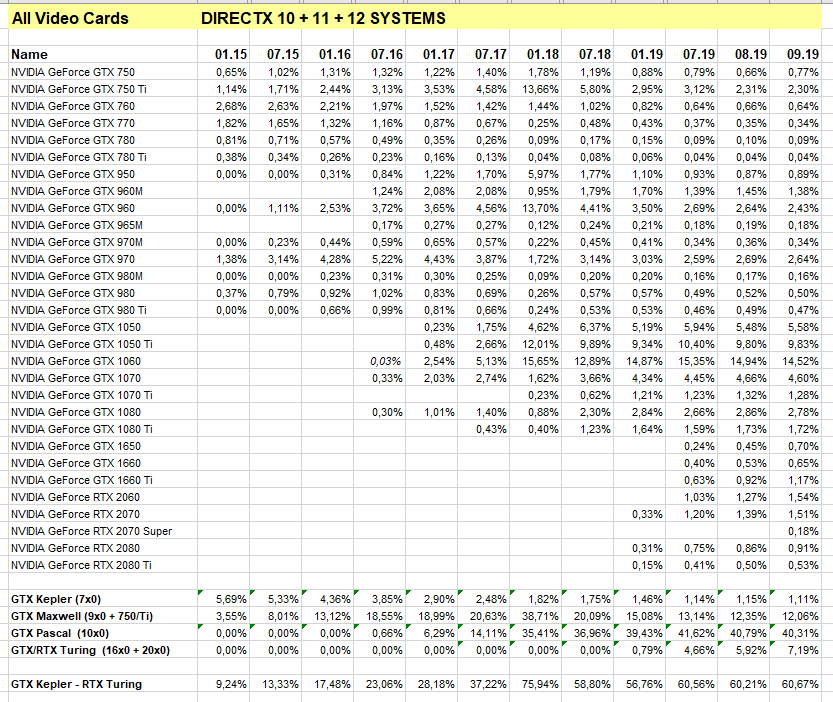 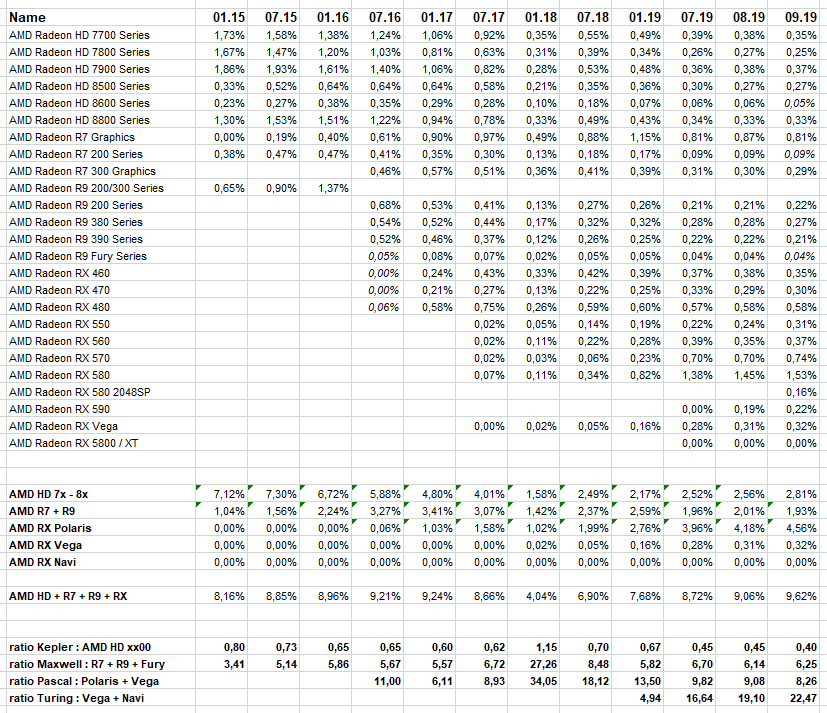 An additional chart for VR-fans: 40% of the PCs in the Steam hardware survey are now VR-compatible.

1.08% of the surveyed PCs already have a VR-headset connected... very slowly climbing but nonetheless still climbing every month. And with the Oculus Quest getting PC-compatible I hope to see the number climbing much faster in the future. 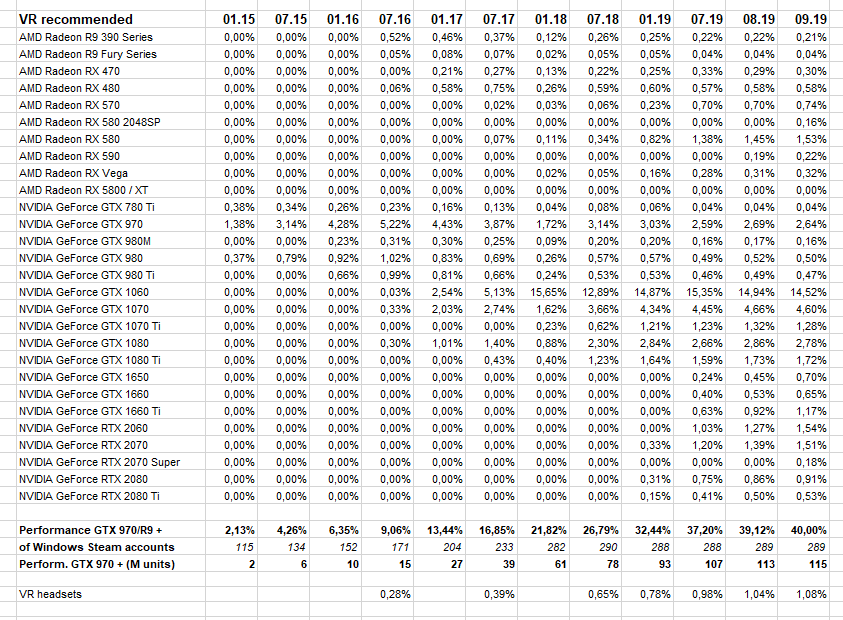 Nvidia still has two GPUs that individually outnumber all AMD GPUs ever released since 2012. That's sad and slightly pathetic TBH.

I kinda knew Nvidia was outperforming AMD but I had no idea it was by this much, damn..

THis makes me wonder if AMD is even going to try with their next high end releases, because they keep failing in that dept.

Valve finally added RX 5700 XT numbers. I'm not sure, if they are counting the XT and non-XT GPUs together  (like Vega 56 + 64) or separate. I guess we will find out in the next months. 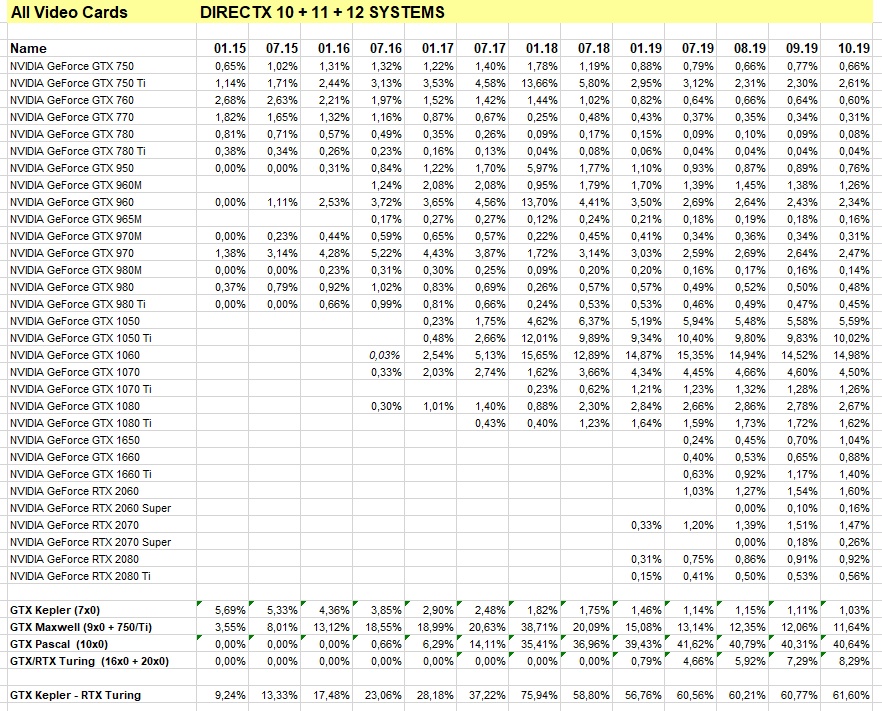 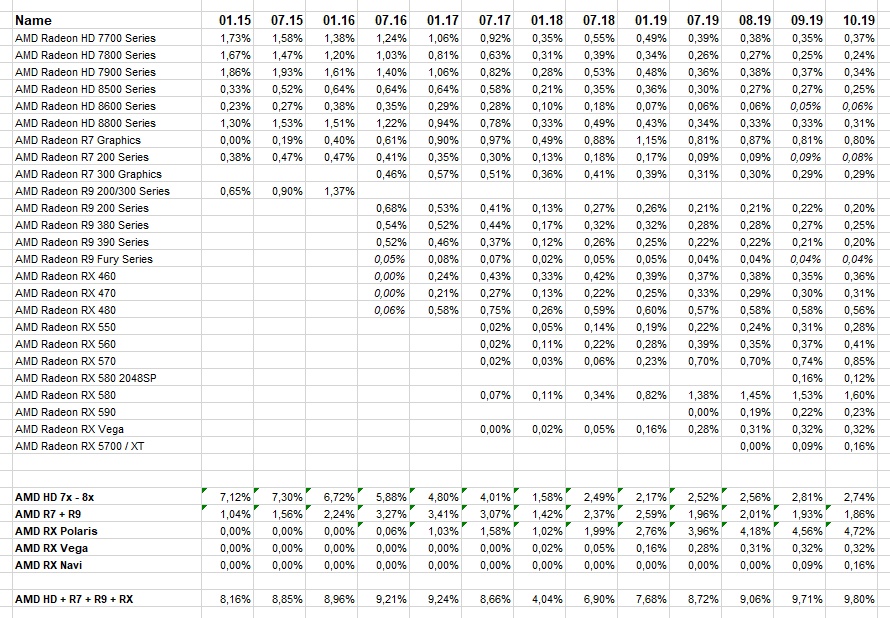 Given how board manufacturers are still announcing and releasing new 5700 cards, I espect that percentage to increase in the coming months.

Last year I got a new laptop with a 1060 in it and I wasn't sure if I was too far behind in a mid-range laptop. Seems 1060 is still strong. Makes me feel better.

And if the rumors about that card are true, so should the 5500 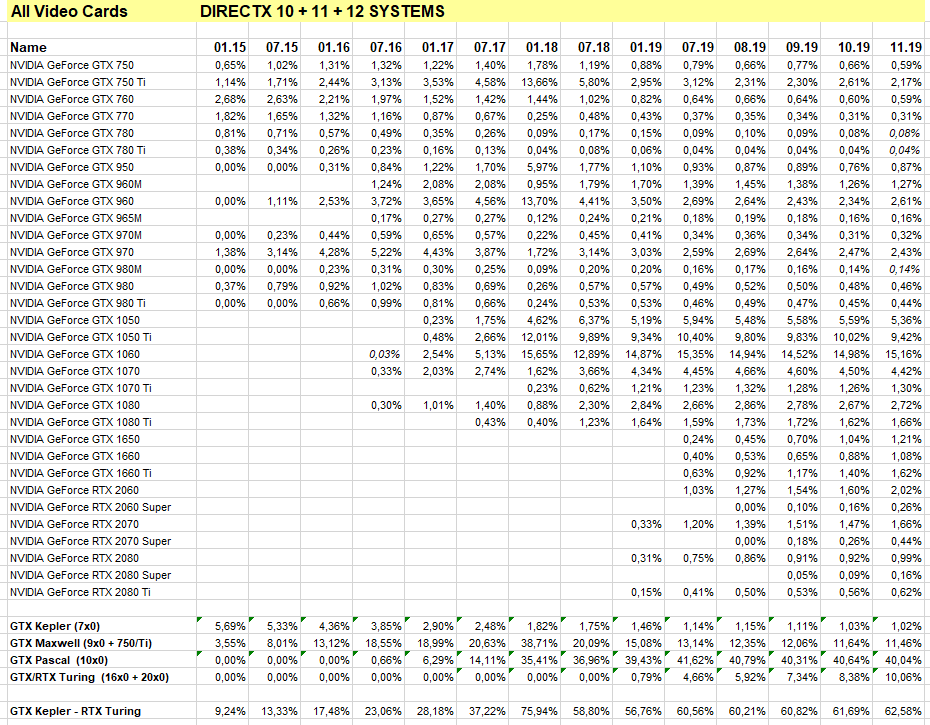 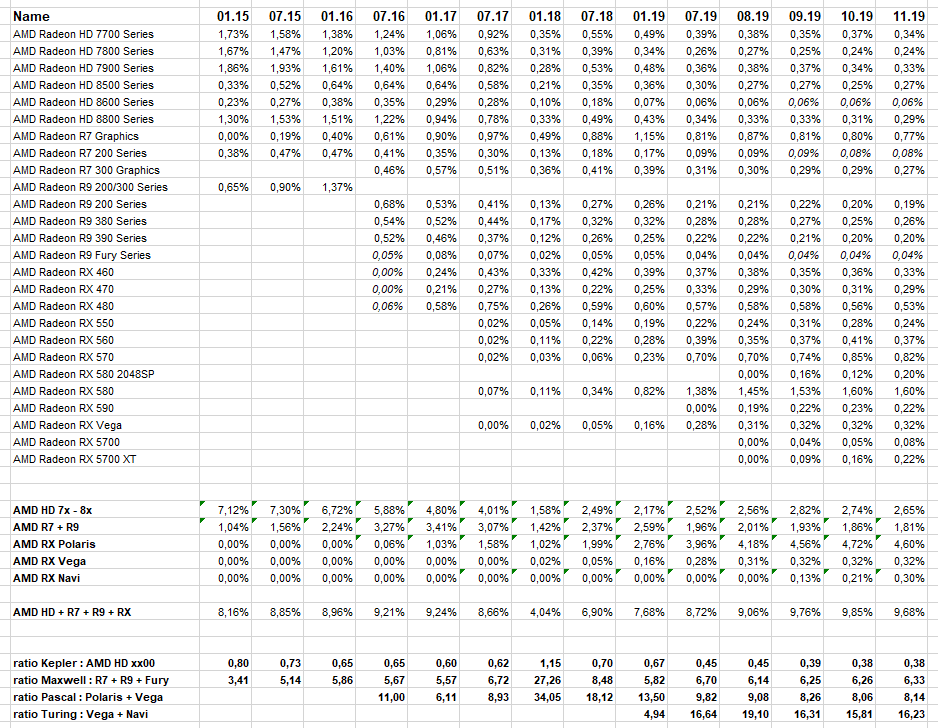 GTX Pascal + GTX/RTX Turing are now over 50% in total