Forums - Gaming Discussion - EA stocks are on the rise again, did all the outrage actually matter?

Not surprising. Star Wars Battlefront 2's sales supposedly rebounded in December after the poor launch in November. Apparently it was the #1 game on Sony's US digital list for December and it apparently did pretty well at retail in December as well.

It's 1 year return is over 40%, above both the Nasdaq composite index (31%) and the S&P 500 (23%). While it is less than other prominent videogame publishers have gained in the same period, it's hardly dissapointing.

It's not like Outrage can make a company this big go bankrupt all of a sudden, the stock has to rise again at some point

In its present form battlefront 2 is an absolutely epic game. Both online and offline

'on the rise again' 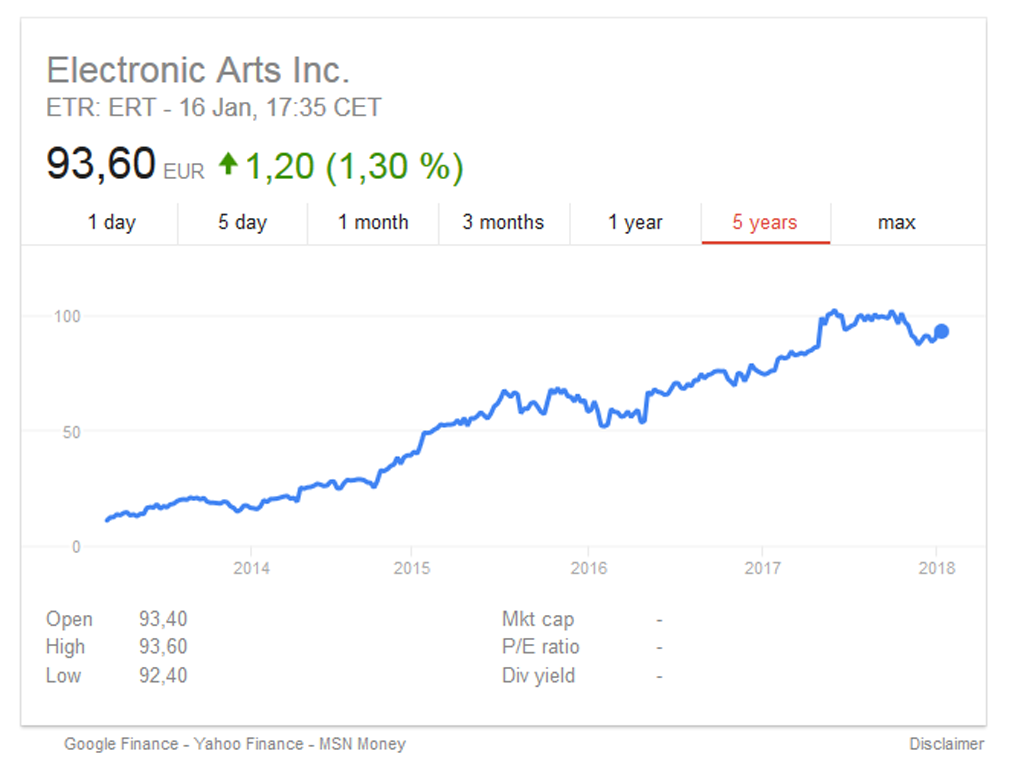 I don't see how this negates my point - the stock has performed very well, both since the presidential election (the period you mention) and with a longer time perspective like 5 years, in which it is up over 600%...

But if by dissapointing you mean "unable to continually provide the continued compound annual growth rate of 95% that in demonstrated in the first half of 2017", then yes, it's pretty dissapointing.

To use an extreme example, does anyone talk about the Vegas shooting anymore?

No. No one has to live with it. Don't be a mindless sheep, but rather vote with your wallet.

I'll never buy anything from EA again, even from the discount bin, and there's a small number of like minded people out there. There are so many great games from more scrupulous companies. It's far from an actual sacrifice, just an easy-to-make decision. I'm not surprised there's been no real change in consumer habits after the fallout. In 2014, it was revealed Subway was feeding it's customers bread "with a side of chemicals said to be used in yoga mats and shoe soles." A substance called azodicarbonamide. For years. To, and I quote: " Make their bread 'More bread like'. A massive betrayal of consumer trust. Yet people still line up like drones for Subway sandwiches, even in a food court environment, where there are dozens of other options, because *shrugs shoulders*. I haven't been back since, and never will be. Fuck EA, fuck Activision, and fuck Subway.