If you're looking for a glitchy game where a dragon can show up anytime, fly to the nearest village and perma-kill a bunch of quest-related NPCs, shopkeepers and trainers,  Skyrim is your game.

Xenoblade Chronciles 2 ! The story, soundtrack and combat system are AMAZING 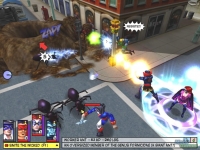 XC2... Skyrim is a relic from the past man : couldn't be a weaker combat system if you tried. XC2 is such a bizarre, wonderful, genius game in mechanics, design and story. They couldn't be more different : first person walking simulator versus 3rd person tactical squad management. As others have said though can't go wrong you probably need both. One thing they both do fantastically is world building : so maybe think "do I like snow and ice and caves and vikings and stuff", or "do i like the ideas of diving off islands that are flying titans into a cloud sea for treasure ? and boobs". Either way the world is huge and you can get lost in it. It's a great question! Western vs Eastern RPG...

It depends on what style genre of rpg appeals to you more. Are you looking for something different or something that you would generally play? Also, if you're lost read reviews and think about what interest your more rather than whats the popular decision. Being on a group like this also helps, but be weary of bias. Popularity and critical acclaim should only be useful as an enjoyment aggregate. I more often than note take note from the critical acclaim. Think about that and it should steer you in the right direction.

Buy Xenoblade now and wait for the eventual price drop on Skyrim to get it.

Xenoblade. Skyrim will probably drop in price a month or two from now by which time you will be done with Xenoblade. While Xenoblade will not drop in price for a long time. So you will be saving money and get two games in three months instead of waiting to get Xenoblade later when you have the money

From what has been indicate sort of, its said by player who have finished it that the two stories and events are still independent of each other despite having this link.

Both related and unrelated. 90% of the game it's not but it is related in a very specific way revealed  at some point. I will put it in a spoiler for anyone who wants to know. Just know this is a major spoiler late in game.

It shows the war on Earth and Klaus in the space station with  the Zohar and destroys reality and creates 2 parallel universes. One reality where Shulk lives and the other where Rex lives. Klaus himself was split in half and his evil side is Zanza. Rex and Shulks adventures happen at the exact same time. For other reasons too long to get into. If Shulk killed Zanza too early it would destroy Rex's reality. There is three Aegis's. Malos, Pyra, and Alvis who is the Monando in Shulks reality. Shulk, of course, is unaware of this, because all he knows is Zanza.

There is a link, but it's an 11th hour thing. You can play either game first and appreciate the link in the same way once playing the game you play after. Not really more to say without spoiling.