Valve boss reaches No.97 on latest Forbes rich list, believed to own just over half his company 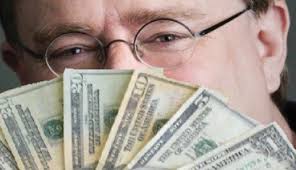 The founder and CEO of Valve was valued at $5.5bn, up from the 4.1bn Forbes estimated in its March 2017 Billionaires list - not bad for a Harvard University drop-out. His net worth has increased fivefold from the $1.1bn it was reported as in March 2013.

Newell placed in joint 97th in the list, alongside eight other billionaires with the same network. He previously placed at No.43 in the site's Richest In Tech list earlier this year.

Naturally, his success can be attributed to the ongoing dominance of Valve and its Steam marketplace that Forbes reports "sells game licenses to 125m users". Valve is not a publicly listed company and therefore doesn't share its financials, but Forbes estimates just over half the company is owned by Newell.

Newell's self-made score - a 1 to 10 ranking that indicates whether their fortune was entirely inherited (1) or built from the ground up (10) - is an impressive 8.

Is that money just from Valve? Seems kind of crazy if so, didn't realise Steam was THAT big!

The drop out thing can definitely promote the wrong message, though I do like that it encourages those who've already missed out on some level of education to not assume they have no prospects.

Unless you're one of a small handful of people who have million dollar ideas, though, a degree will only help your cause going forward.

Well, just imagine how many people buy keys to open crates in games like CS:GO, that 20 or 30% of every sold game goes to Valve (and they sell hundred thousands or probably even  millions of games per day) and look at the sheer amount of stuff people sell every day on the market place and you will get an idea how big it is.

Now Steam does get big in China and some other countries. Wouldn't surprise me to see him in the top 20 of the richest people on this planet in some years.

They make like 4+ Billions of revenue per year and only have a few hundreds of emloyees.

Rolling in that Steam money.

So, is Gabe richer than Donald Trump ?

Dude can make Half Life 3, Portal 3 and Left 4 Dead 3 out of his own pocket and his net worth would still be over $5Bn. And since they're a private company, they dont need to report shit to investors for making risky lootboxless, MT-less linear (singleplayer) games.