I hope we can get more LGBT characters in games.

OP, sorry to derail the thread. I think it's a cool direction to have a gay character with a backstory.

But it's just dialog. An inconsequential subtle part of a character's backstory that doesn't effect the game.

Exactly.  It's a fighting game.  Who cares?  I like the way it was done for Ellie in Last of us.  It wasn't mentioned at all in the main game because it wasn't important.  I haven't played any story modes with MKX yet, but it seems like it's the case here too.  I just don't get making a scene out of it all.

Why not bring up the fact that this is the only main stream fighting game that has ever had at least two black females?  Tanya and Jaqui.

... And, Alfredo worded what I was trying to say a whole lot better than I did. 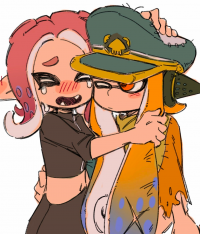 Watch the internet overly react to this for no reason.

ohh i was thinking you were talking about the costumer, thaths the person who get fucked in the ass the most in Mortal Kombat.

Then why it his sexuality his  identity? Doesn't seem very organic and the stories make it seem very token.

Capcom have Poison for ages and nobody congratulate them. Poor Capcom.