At least , it will be more powerful than my PC.

I said I would like to have 24 GB for a machine that last 7 years, but I agree that we most probably get 16 GB of DDR6. It´s just hope.

I wonder if Sony doesn´t prefer to slow down the clocks for better consumption like they did with PS4.

It won´t be the generational jump that we had from PS1 to PS2, or PS2 to PS3, but

from PS3 to PS4 the CPU performance increase was almost null. Here´s the link

With this 4-7x time jump and SSD support, we can have great worlds with many many objects on screen.

you were speaking about GOW and you are right, but I thing about games like GTA V.... GTA V was made for PS3. That system had 512 MB of main memory which 256 were for graphics. The city of LA inside 256 MB of RAM. RDR2 on PS4 is amazing, and there we have 8 little cell phone jaguar cores.

I guess 8 ZEN2+ cores with 2 threds each, and 16 GB of ram backed with a PCI 4.0 SSD wil be Dark Magic in Rockstar developer´s hands. I wonder what Santa Monica and Naughty Dog are planning.

Graphically speaking we will get a bump, but nothing compared to the CPU side, because of the diminishing returns in graphics power.

But 6-7x is not a bad thing to have!. I´m pretty happy, of course I would love to have ray traced native 4k 60 fps games, not going to happen of course, but at least the PS5 will be better for 4k and more technologically advanced than the PS4 for 1080p when it lauched. Games will look better not only in resolution and thats great.

I wonder if some people will think that this next gen will be good enough like what happened with mp3 and wma against CDs or external sound cards against onboard audio. I also think that we´ll get a PS5 pro down the road and maybe a PS5 ultra. Maybe after that there will be a niche PS6 but many will play as a service. In ten years, Networks will probably allow good streaming. We are starting that war with XCloud, STADIA and PS NOW. For me I hope there are still people wanting the box and speculating about the future, hehehe.

Fun prediction: whatever the final specs are, there'll be press release shenaningans such as divulging FP16 FLOPS instead of FP32, or adding the two together, or comparing ray-tracing performance against the PS4 with a benchmark that'll obviously be horribly bottlenecked in the older console.

All so the clueless internet gamers go "see? it's actually 10 - 100 times more powerful!! take that naysayers!!" despite there not being anything otherwordly about it.

Assuming there's no legal concern, I wouldn't be surprised to see GPU specs laid out much like how they are now, but with a 3 letter addition possibly.

With the way the GPU specs are laid out and worded, they may not even need to use "GCN" since they don't specify the exact model or architecture.

Not sure what the PS5 TF will actually work out to depending on what version of the Navi RDNA 5000 series they use. By doing it this way they can match up the PS5 TF to be usefully comparable for the average consumer, who won't know or care what GCN means, if PS even needs to state that at all. The numbers themselves will be what matter most to the majority.

Also depends on what the competition does. Whoever uses a calculation that get's them a larger number, the other will follow suit, even if that meant FP16 was used like you mentioned.

Should also mention that... RDNA, or more specifically the implementation of RDNA in Navi is built on GCN's design principles anyway, just with a bigger focus on gaming and less on single precision compute (Aka Teraflops), hence why Navi has so much in common with older GCN GPU's.

It's like comparing AMD's Zen and Zen 2, Zen 2 is a massive deviation from Zen's initial design principles, but it's still built upon the same building blocks.

Good point. Yet another reason they could just leave out the details, other than in articles for tech enthusiasts, and just keep directly comparing based off PS4 and Pro for the casuals.

Yes about 2x more gpu performance than xbox one x gpu, but for PS4 it should be upwards 8x. Both next-gen consoles will be above 10 Teraflops and DF have run tests showing NAVI gpu architecture having 50% better TF compared GCN 1.0 (ps4 gpu). Just enough for Sony to do native 4k/60fps for all their PS4 exclusive games.

CPU performance will probably be lower, keep in mind Gddr6 has higher latency than DDR4, they very likely cutting of GameCache and around 3,2ghz clockspeed. So around 4-5x.

As Permalite would love to say, there are not better teraflops, but more efficient hardware centered on gaiming. Teraflop is the same, millon of a million of floting point operations. But the feeding of the execution units improved, with better architecture, caché and bandwith. Anyway, everybody undestand your point there, but I would say that the real performance is improved 50% given the same number of teraflops compared to VEGA 64. Better performance than you predicted a couple of years ago, so you might be happy.

Graphics Core Next is an extremely compute centric design, when AMD designed the Architecture they had forward projections that games would become more compute heavy rather than pixel/texture fill-rate heavy or more geometry demanding.

Obviously history plays out differently... So AMD spent the next 8+ years "modifying" Graphics Core Next in order to bolster geometry throughput, improving the ROPS, TMU's, increasing bandwidth via delta colour compression and more... But GCN just had a ton of architectural bottlenecks that held back it's gaming potential regardless of AMD's attempts.
Didn't help that nVidia was making massive strides in efficiency starting with Kepler, making a big leap with Maxwell and refining that with Pascal, which undercut AMD's efforts even more in comparisons.

In short... The 5700XT's peak single precision floating point capability is down 23% from Vega 64, but the more important aspect of the GPU for gaming... Pixel Fillrate had an increase of 23%, ROP/Texture Mapping Unit/Geometry performance increased by 28.7% (And that is before we calculate in architectural efficiency improvements so likely higher!)... And it's no wonder it's able to beat Vega 64 in Gaming.

In scenarios that are compute-heavy, like GPGPU though? Vega will still beat Navi hands down, but that is just because Vega isn't being bottlenecked by components like the geometry engines or ROPS in those instances and thus it can make actual use of it's theoretical TFLOP potential. 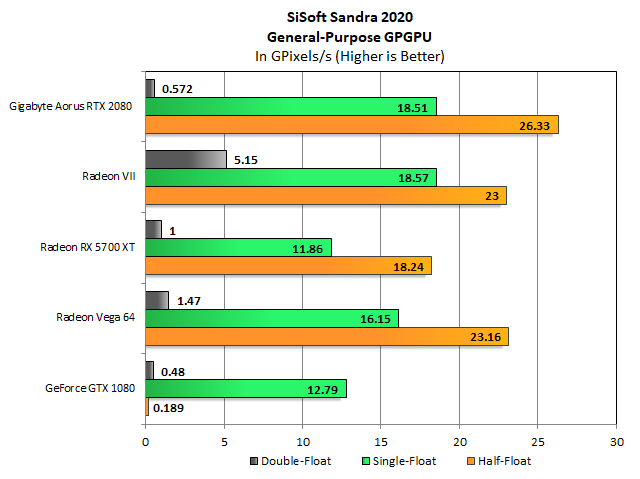 I don't expect someone like Trumpstyle to ditch the "TFLOP" argument anytime soon, but people are slowly starting to wake up to how meaningless TFLOPS are for gaming which is really good to see, if only they knew that a console generation ago!