Alright people let's talk. Some of ya'll are "hardcore" Sony/Microsoft fanatics. Me, I'm a Nintendo fanboy. That being said, I know that all you "hardcore" players still love to bounce on some goombas from time to time as well as slashing at pots full of rupees, who doesn't? Don't try to deny it... just don't. No one can resist the addrinline rush that occurs when one is in first place and hears the blue shell approaching. What better way can you spend your time than being indebted to Tom Nook?

So, this brings me to my point. If Nintendo were create a program where people could buy their system and then pay an annual subscription fee and be able to play any game on Nintendo's console, for any length of time until the system is dead, how much would you be willing to pay? Basically, instead of buying individual games for $50-60 a piece, you could pay a subscription fee per year and play as many games as you want (download them).

Regardless of my love for Nintendo games, I don't think I would go for this. I like having hard copies of games, especially Nintendo games because the replay value is so high.

Plus, I don't think Nintendo would go for this. Its games sell for full price long after launch, so the company would have to charge a huge fee for unlimited access to all titles. 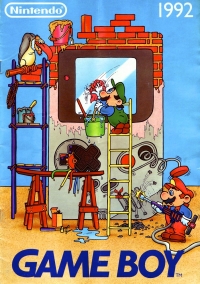 I totally agree. I love physical copies still. I will buy them until they are not produced.

Nintendo would be  stupid if they would follow your idea.

And I want to own my games and not rent them.

I agree, but this is more of a last ditch effort on their part. If the Wii U continues to sell the way it is and doesn't pick up (like the 3ds does), and if this is a precursor to future Nintendo home consoles selling poorly, then they may consider this. I would imagine a ton of people would be willing to own a wii u under this condition as a secondary console because the annual cost would be consistent and not be based on epic software releases.

I would just give into capcoms scandalous MH frontier subscription instead, assuming it does get a western release.
option starting at $200? you must be joking.

edit: btw how much would you nintendo fans pay to play any ps or xbox games?

Why? Free Nintendo games whenever you want instead of having to actually spend $50-60 each, how is $200 not reasonable? In fact, I would argue $200 would not be economically sustainable for Nintendo because the cost of development would probably not be offset by that pricing point.

Uhh, the games aren't "free" if you're spending a minimum of $200/year on a subscription fee.  And I don't know about you but not all "hardcore" gamers spend that much a year on games.  I don't think I spent that all of last year, and certainly haven't this year so far.

Ok, fair point, but your also not taking into considerationg a lot of gamers do buy more than 3-4 games a year ($150-240+). So then I suppose a tiered system could be set up, packages that grant you a certain amount of hours. I have to say I'd consider it because for me, I buy a lot more than 4 games a year and it would probably save me money in the long run.

nothing, i don't see the purpose of paying a subscription on Nintendo hardware. they don't have music nor movies, not that i need them anyway.