This is why some people hate her, because they don't want to accept their part of responsibility on their lives, they want to have someone else to make the culprit of their problems. Some people have a huge peter pan syndrome.

I definitely agree with the bolded. These past couple elections, I ask all my family and older friends who they are going to vote for, the answer? Labour or Conservative, I ask why? Because they've always voted for them >.> That simply isn't a way to progress. I feel we need another Tony Blair style shake up of Parliament just to help break these issues (changing first past the post would also help, it's an absolutely awful system that needs to go).

It is fun to kick against the grain for sure :P One issue which always lands me in hot water is my strong affinity towards greater integration with the EU and dislike of America.

You put it well though, in Britain, if you put the effort in, there is always a way to get a good job and a good life, which we can thank Thatcher for :)

Nothing of value has been lost. Why? She was

and when she resigned in 1990, 28% of the children in Great Britain were considered to be below the poverty line thanks to her PRO social inequality.

I am not saying that everything that she did was totally wrong but poisening people with dumb patriotism destroying the environment and giving a f*ck when people get poor is quite shitty tbh.

Reagan, Thatcher, Kohl and Mitterrand made me hate the western politics of the 80s. Politically, the 80s felt to me like being forced to constantly listen to Bon Jovi, Phil Collins, Modern Talking and Plastic Bertrand - terrible times.

Still, she was a strong and impressive woman.

Made me even laugh at times when she kept the guys on their toes.
(Merkel reminds me of Thatcher in that regard; even though I'll never vote for her - just as I'd never had voted for Thatcher even if I had the opportunity - it's fun to watch how she effortlessly out-maneuvers any internal opponent who wants to take her place; strong conservative female politicians are often underestimated by their male rivals).

From what I've seen and read of her she seemed to be at least mildly classical liberal/libertarian, albeit I'm sure she had many conservative (per the non-American definition) views, which I might likely disagree with. I love watching the videos of her toying with socialists though, haha. R.I.P

She absolutely destroyed some communities ripping out their hearts. That's where a lot of the hatred stems from. Now it's also hear-say being passed on.

I'm too young to really have first hand experience of her policies. But I think as awful as the impact of her policies was on mining communities etc. A lot of it was a necessary evil for the greater benefit of the country. Though I live in Yorkshire so it would seem my opinion is in a minority here. A few people at work were cheering when they found out.

The miners union is also reportedly planning a big party during her funeral.

We need another political leader with as much drive and conviction as she had now.

We're currently stuck with a lame duck in Labour who are too busy opposing and shouting out against everything just for the sake of it with no offer of a credible alternative and who played a very large role in causing the mess in the first place. Then we have the Tories and Lib Dems bickering and blocking each other's ideas. If any ideas to try and fix the economy do come out, one side or the other has managed to block and dilute the policy down enough that it won't make a blind bit of difference.

To give you an idea of just how hated Thatcher is here in Scotland, there are parties going on right now because she's dead. I have friends on Facebook posting about it. They're in attendance. They lived through what her policies did to the people they loved, and it seems they are looking for release. Not my bag, but I understand.

Further, I'm spotting parties popping up all over the country now. For example, down in London:
http://www.itv.com/news/update/2013-04-08/revellers-in-brixton-celebrate-thatchers-death/

Some people liked her. Some didn't. But a hell of a lot really, quite absolutely, hated her. 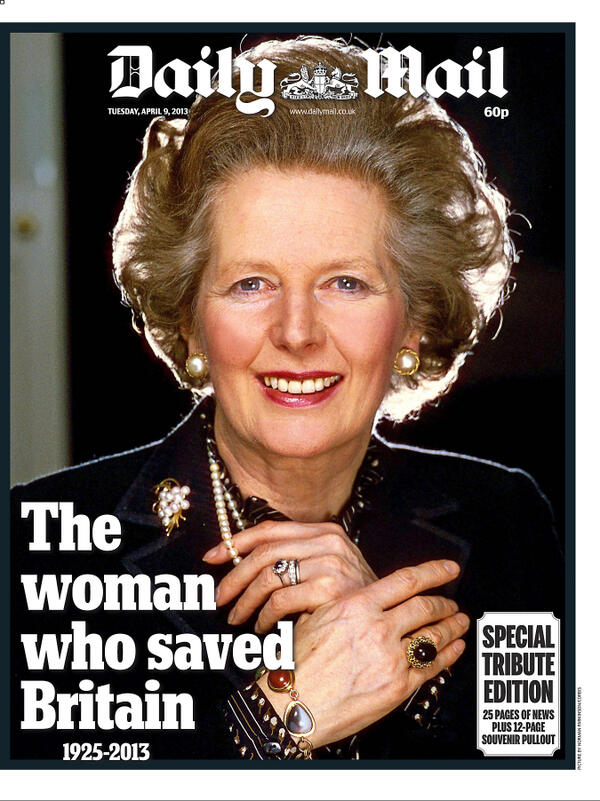 There you go, kow

Maybe the unions had too much power before Thatcher came into power but she destroyed numerous rural communities out there, manufacturing and mining were especially hit hard. Many places that grew on these 2 things haven't recovered since then, despite being 30 years. You may point out the miners strike of 84, but she was going to shut them down anyway. These people were fighting for there livelihoods and she took it from anyway. The community spirit in such places was destroyed for good and to think we could of been in a good position selling our good coal to China and India right now if the mining industry had survived. The hatred from the North is because so gutted such mining communities of there souls.

And if manufacturing is so alive here, where is it? Every factory in my area has vanished, they are either abandoned or some housing development now.

And you surely can't defend the Poll Tax of 1989, in any system a Lord shouldn't pay the same tax rate as a council tenant, that's extremely unfair and i'm glad we the people defeated her on that (partly thanks to Scotland)

And you say she liberated the working class, how? Unemployment was much higher back then, i think it peaked at 3 million and she closed the GLC because that number was leaked. Deindustrialisation played apart but so did privatisation. Inflation was also high at 15% at times. Interest rates were as high as 15% at times. VAT was raised by alot, hurting the poor even more in a tough time. And i partly blame her for today's recession because of deregulating the finance sector (which only benefitted London by the way), which has lead to a rediculous bonus culture for CEO's of Banks. The massive sell off of our assets means we don't even benefit from the profit, British rail, BT, British gas and others had. The profits are now left in some off shore bank account doing nothing. And prices have gone through the roof since privatisation, just look at how expensive trains are these days and look at the huge profits British gas make despite falling energy prices.

I'm not sure how much this has to do with her, but the Media seemed to be biased in her favour by any media that Rupert Murdoch owned. It's possible she had a deal with him to get good press just like Tony Blair did. Man I hate the Sun, worst paper ever. News shouldn't be biased in anyway. Also, the BBC admitted it altered any footage of the Miner's strike to make it look like the police were attacked when it was the opposite way round.

Northern Ireland- she pretty much acted like the British Empire did there. She had the army repress the people there which caused widespread violence. It's no wonder the IRA tried to blow her up in Brighton in 1984. Since, Labour devolved power to Northern Ireland in 1999, there has been much more peace.

Education- she did little to make it better and new schools and equipment was needed. I'm proud to have been educated under Labour for nearly my whole education. It's a shame Tories want to fuck it up now.

I won't talk about Hillsbourough but there were many riots under her rule. Brixton being just one of them.

What good did she actually for Scotland, Wales, the Midlands etc. Scotland and Wales were completely controlled by Westminister back then but seemingly ignored by her

It's not all bad though i think some things she did were good.

The Falklands, she defended our territory as the people living wanted despite no backing up from Reagan or any non-communist european leaders. It's a shame, Argentina would just forget about it already. It was never theirs.

Despite mass privatisation, she left the NHS alone. Hopefully, Cameron will too.

She was a strong leader, did she ever really u-turn on anything?

Europe- i like that she was skeptic about the project. Just look at the mess it's in now, even though we are no better off.

Socialism may be dead for now, but do you really think this form of capitalism is failing big time. Growing up into such a broken system now, i don't trust it. I'm gonna start a degree this year and might not even be able to get a job when i finish in 3 and a bit years time. the current economy shows no future at all. Not Thatcher's fault but it's capitalism fault. Boom and bust must stop now. A mixture of capitalism with Socialism is best.

Overall, better than Blair but i still overwhelmingly disagree with her. At least she could win a war. Also, Blair's ID cards idea was also bad

USSR- all she and Reagan did was put pressure on them. The Soviets couldn't handle it and so dissolved it and went to Capitalism. Gorbachev lead a peaceful transition to Capitalism.

Glad this thread didn't break out into a stupid political argument. Then again most of us were too young or weren't even born to really understand the experience of life under Thatcher.

For those that do remember life under Thatcher ... you are no spring chicken.

My dad loved her her, my mom didn't care and her brother thought she was the scum of the earth. All this I gathered as a tiny tot in the late 80s.

My parents prospered under her rule so I have no complaints towards her. As for many in Ireland, and those in the North East of England in the 80s going hungry with hungry kids it would be somewhat different.

If I was one of those that lived in the North at that time I wouldn't be too sad she is gone.