Forums - Gaming Discussion - What dormant theme/genre etc. do you want to see return?

There are plenty... but not in recent years. I'd be surprised if there was a single aaa WW2 game that released in the last few years

We dont need anymore and the last to my knowledge was COD this gen and Battlefield 1943 on Xbox Live and PSN. Westerners are obsessed with shooting.

Yes, I 100% agree, this genre was epic back in the days of SNES and PS1 and it hasn't seen as many entries as I'd like. Lost Odyssey was one of my favorite RPG's this gen. However I'm okay with non turn based, XenoBlade, Last Story, Tales of Vesperia, and Valkyria Chronicles were all awesome.

I'd like to see RPG's go into setting which haven't been explored too much in the past. For example, Fallout is a great post apocolyptic game, but what about 150 years future into the future? I'd like to see a post apocolyptic game where nature reclaims trees. Maybe instead of a Nuclear war, have an abandoned city like The Last Of Us, but distant enough in the future so that many skyscrapers have collapsed, trees overgrow roads, and people live in renovated older style homes (Castles are more durable then skyscrapers because stone doesn't deteriorate as fast as concrete re-enforced with steel).

Basically I want to see games which have a deep and interesting story, like Chrono Trigger, or Lost Odyssey, but have a unique theme. Lost Odyssey had immortal people, Infinite Space is well....a space RPG (Have to play it still), Radiant History/Chrono Trigger had Time Travel, XenoBlade had an alternate universe with giant "gods." etc.

I'm tired of re-used themes in JRPGs, and I want a more traditional gameplay. FFXIII was terrible, it failed in both these aspects.

PS1 could not get enough of C&C Red alert retaliation.

The PS Move would work well with RTS.

Most recent WWII game I remember is Sniper Elite V2, which probably isn't AAA. The next major one is probably Furious 4 from Gearbox.

I'd propse something that was never really popular-

A 3rd-person Roguelike game, with the camera behind your character. Randomly-generated dungeons and RPG leveling system. Sounds like it would be an amazing game to me....... 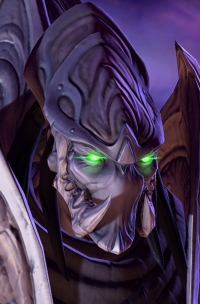