First The Muppet oppression, now this. It looks like the Academy has just banned actor Sacha Baron Cohen from attending the 84th Academy Awards, even though he is an Academy member himself and one of the stars in Paramount's Hugo, which received 11 nominations. "Unless they're assured that nothing entertaining is going to happen on the Red Carpet, the Academy is not admitting Sacha Baron Cohen to the show," said an insider at Deadline. The reasoning behind this ban stems from a proposal that Baron Cohen had submitted to the Academy in which the comedian would arrive on the Red Carpet dressed in full costume as his title character in Paramount's upcoming comedy The Dictator. Baron Cohen would then change back into a tuxedo for the duration of the Oscars. 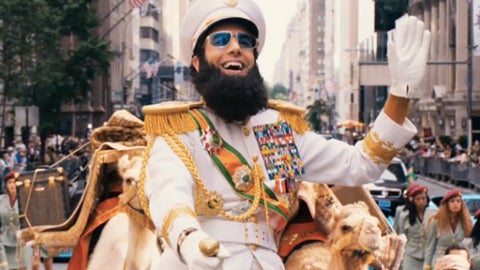 Not only was this proposal rejected, but it also prompted the Academy to revoke Baron Cohen's ticket entirely, preventing him from even attending. Said one Oscar spokesman, "We would hope that every studio knows that this is a bad idea. The Red Carpet is not about stunting." Right, right. Except for this... and this. But what are your thoughts? Is Baron Cohen's punishment completely out of line, or do you think the avid prankster has what's coming to him? Let us know what you think in the comments below! Update: And now The Hollywood Reporter claims that Cohen has not been banned. "We haven't banned him," an Academy said. "We're just waiting to hear what he's going to do." Maybe he'll just carry a bag of crap on the red carpet, Borat style? Second Update: Now a message has been posted on The Dictator's official site: "Admiral General Aladeen will deliver a formal response tomorrow morning to being banned from the Oscars by the Academy of Motion Pictures Arts and Zionists." Yikes. Stay tuned. Third Update, 2/24: And here is Admiral General Aladeen's official response to his Oscar ban:

Fourth (and hopefully final) Update: Oscars producer Brian Grazer appears to have settled the whole matter in an interview where he said, "We're thrilled to have him and he'll be on the red carpet, I guess, dressed as the Dictator." Cohen is expected to later appear during the actual broadcast as himself, according to the Los Angeles Times.

To which Admiral General Aladeen has issued the following statement: "VICTORY IS OURS! Today the Mighty Nation of Wadiya triumphed over the Zionist snakes of Hollywood. Evil and all those who made Satan their protector were vanquished and driven into the Pacific Sea. What I am trying to say here is that the Academy have surrendered and sent over two tickets and a parking pass! TODAY OSCAR, TOMORROW OBAMA!"

glad he got his way

Smart way to get more butts into those cinema seats for The Dictator.

Yeah, it's clearly just a gimmick. But an enjoyable one, at least.

How dare something entertaining happen.

That is great! I have been watching him all week on the morning shows. Making fun of Matt Lauer, threatening everyone. Sadly, I am not sure there are many more taboos for him to do after this. Is there?

That's what I thought after Borat, but along came Brüno and The Dictator! He'll think of something...

Do not forget Loveable French Dude in Talladegga  Nights with Ricky Bobby.

That's how I found out that The Highlander is the best movie.... EVER MADE.