Forums - Gaming Discussion - I think I'm done with shooters. How about you? 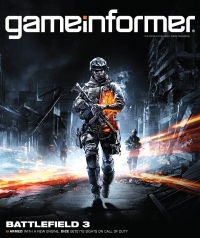 Haha Hell no! I love 'em, especially mixed with rpg elements like Deus Ex an Mass Effect. I preordered Battlefield 3.

The OP seems to be built on a hidden premise that multiplayer is the only reason to buy a shooter and considering what's come out this year and coming out next year, that's a pretty headscratching charge to make.

themanwithnoname's law: As an America's sales or NPD thread grows longer, the probabilty of the comment "America = World" [sarcasticly] being made approaches 1.

Insomniac: overstrike and wht it accomplishes.
guerrilla games: theres a new shooter in the works from this studio and i'm interested in seeing wht it is
Rage: will buy soon
Platnium games: Vanquish2?
Bioshock infinite: i know your going to pick this one up right OP?

there are a few that i haven't picked up anyway considering i play more then just shooters, and i only play shooters that innovate and that are made by sertant studios so no COD's or BF.

I almost don't even see something like Bioshock, Uncharted, RAGE, Half Life, Borderlands as a shooter. I mean they are, but they are, but they're also action adventure games with puzzle, exploration, and customization elements. Not testosterone driven military romps, which are built for multiplayer, which is more what the OP refers to. I will update to clarify.

Just bought Warhammer 40,000: Space Marines and Crysis PS3. Next games are probably rage, and uncharted 3. Not to mention the shooters like resistance 3 and Gears 3 that I will get later. So no I am not even close to done. I am good at them and only getting better and they are the most social genre other than party games.

Never done with them, personally. I don't ever discount a game because of its genre, and some shooters can be hidden/surprise gems! that said, I do find that about 90% of all third and first person shooters are basically the same with little to no variance, plagued with the same shoddy gameplay/difficulty issues, and the fact that they're flooding the market lately.

Of course, since a surprisingly large chunk of games incorporate shooting elements into them, it's really hard to differentiate them. I refer mostly to stuff that's almost entirely shooting action (Halo, Call of Duty, Gears of War, Battlefield, Bulletstorm, Resistance, Killzone, homefront, etc), not stuff with other elements to it (bioshock, metal gear solid, grand theft auto, fallout, uncharted).

I 'generally' avoid shooters, anyway. I just don't find them that interesting. my favorite shooters this generation have been the Left 4 Dead series, Resistance 3, and Bulletstorm, because they are shooters t hat do things a bit differently. LEft 4 Dead and Resistance has HEALTH PACKS rather than bogus recharging health, Bulletstorm was silly fun and didn't take itself seriously, Resistance had an atmosphere unlike anything I've played in the genre. Not to mention I'm a fan of unique weaponry, fun multiplayer modes, and co op.

generally, I t hink the genre is pretty damn stale.

i almost forgot about start hawk.

"Frankly, the removal of bots and four player splitscreen from most shooters has dampened the funnest part of the genre for me, which is playing socially with real friends in one room talking trash and getting trashed. Sorry, but online just doesn't make up for that. "

Split screen coop or playing a coop game with two consoles and TVs in the same room is better or about the same. People wouldn't complain so much if they tried it. Not to mention that you can play with real life friends online. I really don't understand why people don't get that.

You don't understand the difference between 1) friends coming over for a drink and ending up playing local multiplayer all night and 2) meeting up online and playing together without actually being together?