Forums - Movies Discussion - Transformers 3 Already the highest grossing movie of 2011 in the U.S so far!!!

For the second one they were still on the planet because of the Allspark, because of the information that was stored in the Allspark was what would point them to an Energon source hidden on Earth.  Meagtron wasnt aware of this until he was instructed of it by The Fallen.

The thrid one did have problems, but they arent that bad.  And Optimus is 4 times bigger than Bumblebee.  Thats about the difference in size between Camaro and a Semi Truck.

i love the transformer movies alot, all 3 of them. optimus prime is the daman
also ppl dont remember it seems that the humans were a good part of the cartoon plot, spike and his dad were huge factors in the series 1st half. and then daniel , spikes son ended up becoming the head in the headmasters plot near the end of the series 2nd act, also spike created fortris maximus for the autobots to fight against scorpionox on cybertron in the last episode to give the planet its 2nd golden age that vector sigma said would happen. ppl really need to go back and properly watch the series again.
also yes harry potter and the deathly hallows part 2 will be #1 this weekend and anybody would say that. however it will likely fall like the last one did and will finish 2nd to transformers 3 in total domestic gross, worldwide it could be a tie or damn near it when its all said and done.

The first one was a good movie, you got exactly what you expected. All I can remember out of the 2nd one was the head ache I got comming out of the cinema.

It's not going to last long 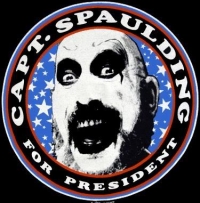 Hey be nice to horror films. It's harder for them to make as much money when they are Rated R with gore and nudity. Of course PG-13 films and lower rated films are going to make more money cus younger people are the big part of the movie going audience and they arent suppose to be able to get into R rated films (of course some find there way around that). And as far as horror movies that have made lots of money and have not sucked, there were tons back in the day that were box office smashes. Jaws, Silence of the Lambs, The Exorcist, The first 3 Scream movies all were in the top  grossing films the years they came out. The reason horror is in a rut is because they have run out of ideas to scare people and are turning to remakes. If I see them butcher one more classic horror film I'm going to vomit! But I'm getting ready to see them ruin one of my all time favs Fright Night this summer.

Well, it was easily the best Transformers in the series, that's a pretty good reason behind its sales.