If it wasn't for Nintendo we wouldn't have seen Natal or Move att all this gen hell I don't think we would have seen it in the next one.

and after all competition gives quality.. Nintendo 1st party has so far been unappealing to basically everyone I know.. (with exeptions, but few)

I would like to hear what Sony could POSSIBLY do that would hurt Nintendo..

Take away Wii sales? Wii sales are super high right now and 3rd party studio's are massively backing down on developing for the Wii.. so that's definetly not a big concern

Wow really? for me it's the other way around, basically everyone I know thinks that just NSMBW by itself is appealing enough.

Actually, you are years ahead.

The NES zapper was a gun that used motion and light beams to control an on-screen cursor for shooting games, and was released in 1984, five years before the power glove.

Sorry, none of our current console makers are responsible for motion control.

Nintendo brought it to consoles, however... but their technology has BARELY improved in this aspect over almost 20 years now. They are still using cheapo lightbars that are incredible inaccurate and a hassle to deal with.

At least Sony and MS are taking it a step further. 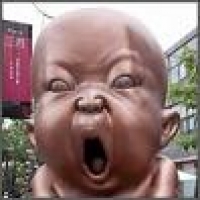 But Nintendo made it popular.

It isn't about who copied what, its about how Nintendo has implemented the motion controlling to its best advantage.
Remember that even though the British created the tank first, only until the germans made a better version of it in the world war
Same for Apple, they recreated the mp3 player that everyone appreciates.

So? Nobody else was in the console biz when Nintendo started to test various motion devices, so it kinda hard to argue against that.

Making something popular doesn't make it good. Like I said, Nintendo is using the same light-based technology with the Wii that they did 20 years ago with the first nintendo. Its inaccurate and isn't by any means new technology.

Sorry, but I can give you literally THOUSANDS of examples where someone or something made something popular but are NOT known as ever doing it the best. Hell, most of them aren't even known for doing it good. When something is new, its fun and exciting, regardless of how piss poor it is. Hence, the Wii.

Video game companies don't make anything (except games). They all borrow from existing technologies, aliens, and labs. They just decide which existing technology will be good for gaming and then they integrate it.

Turbo Touch 360, U-Force, Activater, Power Pad, Power Glove, Life Fitness Life Cycle, Miracle Piano Keyboard. These are all video game accessories that came out 15-20 years ago for video games. Look 'em up. If they were released today (and actually worked), your minds would be blown away. The concepts aren't new. The implementation is.

Right, which can be said about virtually any other invention in history. Relativity is what we are talking about in this topic, though.

And as I said before, the computer mouse was the motion controller for gaming, and in no way credits anyone that currently has anything to do with video games.

i knew about dream eye its so cool im thinking of buying it but there so rare to find (especially an NA version). sony definitely ripped the playstation eye from dreamcast (which ill sadly admit)