In the Spirit of VGChartz Greatest Games of All Time thread, I decided it was time for me to talk about my favorite game: Sonic & Knuckles.

Sonic & Knuckles is my favorite game of all time.

Yeah, you heard it here first (unless you've heard me praising it about everytime I post...), this game is the pinnacle of the Sonic series and the pinnacle of video gaming. In all of my years of playing, I have never found a game to be so complete as this title. This game just gets it. It contains that special Sonic formula perfected in Sonic the Hedgehog 2, continues the evolutionary changes of Sonic the Hedgehog 3, adds a spectacular soundtrack only bested by one other game (but still contains my favorite track in all of gaming, I'll get to it later), and finally, it adds a more focused story that really makes it something special.

Sonic & Knuckles starts where Sonic the Hedgehog 3 ends: Dr. Ivo Robotnik's Death Egg has once again failed to take flight, and now the doctor needs something truly powerful to make his doomsday device functional once more. So he targets the Master Emerald, the jewel that allows Angel Island to float above the seas. To do this, he once again tricks the island's protector, Knuckles, into thinking that Sonic wants to steal the Master Emerald. So as Knuckles tries to hinder Sonic's progress, Dr. Robotnik tunnels into the core of the island, looking for the magical jewel. Sonic speeds from location to location, trying to stop the doctor from fulfilling his plans.

Unlike the previous Sonic games, Sonic & Knuckles always makes it feel like you're going somewhere as you speed forward through the game. In the other games, you had your ice level, your fire level, your grassy level, and then the big ol' bad mechanical level leading to Dr. Robotnik. In this game, however, it really felt like each step gets you closer and closer to your destination of finding the Master Emerald. The grassy level led you to Robotnik's warship, and after falling off, you find yourself in some ancient ruins. The ruins led even further downwards into a crystal cave. With each step you know you are accomplishing something great, a grand adventure is being unveiled as you race onwards.

And after you sped past the crystal caverns, you finally found it, the Hidden Palace. This was it! This is what you've been searching for, and you've beaten Robotnik to it! As you race forward with great speed, awaiting the moment where you would find the Master Emerald, Knuckles leaps forward and challenges you to a final duel. This is it, this is where it finally comes to an end with the Echidna. Hell yeah, this is what I've been waiting for since Sonic the Hedgehog 3 (I'm gonna get the bastard for laughing at me)! And as you battle, in the background you see a picture of what looks like... Robotnik and Sonic? What could it mean... ah well, time to cherish this grand battle that lies before me.

And when I connected the final blow to the Echidna and approached the glorious artifact, something terrible happened. Robotnik appeared and started to take the Master Emerald. Knuckles, knowing he was tricked, did the only thing he knew how to do: try and use force to try and take back his meaning in life. Robotnik easily got rid of him with an electric shock, and Knuckles fell to the floor unconscious. I suddenly felt sad for him, knowing that he was tricked all along and all he wanted to do was protect the emerald, and had failed. Robotnik flew away with the artifact in tow. It was only a matter of time before the Death Egg would once again be functional. We had lost.

But suddenly, Knuckles rose to his feet and lead the way. He took me to a teleportation device that took us to the Sky Sanctuary, the highest most point on Angel Island. As we arrived, we watched as the Death Egg rose into the air, how could we win now? His doomsday device was once more functional and ready to lay waste to Mobius. But instead of giving up, Knuckles used the last of his strength to prepare a way for me to get to the Death Egg. In that moment hope had been restored, and I had made a new friend.

Sky Sanctuary Zone has to be my favorite moment in gaming history. It's my favorite level, has my favorite track of all time, has some of the most beautiful visuals I've ever seen in a game, and what I love about the most is it truly feels like there's still hope as you climb further and further upwards to catch the Death Egg. It's just a game defining moment, and it will never be forgotten. Plus, you get to face Mecha Sonic, the most awesome incarnation of a mechanized Sonic ever. You face him multiple times as you climb higher and higher, and the battles are previous Robotnik battles from earlier Sonic games! How sick is that? This level is just too much, it's just too perfect...

And when you finally defeat Mecha Sonic and make it into the Death Egg, you find yourself in the middle of Sonic's biggest challenge yet. The level is just absolutely insane, where you have to deal with all sorts of altered gravity, spike traps, missiles, and plenty of foes. The Death Egg is incredibly massive, and it'll test all you've accomplished during the previous levels and even the previous games. It's tough, but you know that sooner or later, you're going to be having a showdown to end all showdowns. And then you finally get to him, Dr. Ivo Robotnik. In respect to the original Sonic the Hedgehog, Robotnik is out of any sort of contraption and instead, you find yourself inside of his mechanical trap. After figuring out how to use the gravity to your advantage, you finally defeat his device. It's just you and him, and all seems finished.

Instead, Robotnik has created his most powerful robot creation yet, and you find yourself at the mercy of this behemoth of machinery and power. I had never seen anything so intimidating in my life, and I knew that this was going to be one heck of a battle. It went on and on, him firing everything from fire to giant lasers (giant lasers: Mind blown). All I could do is try to survive and hit him at his power source: the Master Emerald. It was tough, but I finally did it! I defeated Dr. Robotnik's most powerful creation, and all was finished!

Or was it? Well, if you did happen to collect all 7 emeralds, there was still one more thing to accomplish: return the Master Emerald to its rightful place. After defeating him on the Death Egg, Dr. Robotnik fled to the stars and I had to chase him down as Super Sonic. It was amazing to chase him through a meteor field, trying to desperately take him down before my rings reached zero. It was truly an amazing way to end the game, and when I struck the last blow, everything was returned to normal. The Master Emerald was returned to its rightful owner and Dr. Robotnik's plans had once again been squashed. Not to mention that the Death Egg had been put down for good. It was all over, and all of Mobius cheered.

...And with the game's lock-on function, you could! Imagine, playing Sonic 2 and 3 as Knuckles the Echidna. It let me revisit some of my favorite games as my new favorite character. Thanks to this game, all was right in the world. I think I've rambled quite enough of how I love Sonic & Knuckles. I've played a lot of video games in my life, and this game stands tall. It's been fun remembering all of the great times I've had playing this game, and when it comes to true greatness, Sonic & Knuckles is where it's at.

Glorious game, though i could only beat it from the significantly-easier Knuckles perspective. Completely skip the Eggman fights in Carnival Night and Lava Reef Zones, as well as completely skip the Secret Castle zone, and a truly epic fight against Super Metal Sonic at the end of it all.

so FUCKING CLASSIC, I LOVE THIS GAME, STILL PLAY IT TODAY


You should be beaten, burned to ashes then someone should throw your ashes from a plane

And you know why.

Damnit Smeags, why do you always forget? :P

Yeah, Knuckles' adventure was quite different from Sonic's, although the Egg Robo that Knuckles fought instead of Dr. Robotnik was always a little tougher than Sonic's boss battles. Still, that final fight with Super Mecha Sonic was fantastic. Brilliant ending.

I'd buy it... even though I already have Sonic Mega Collection.

Ya know mister, I'm not counting Sonic 3 & Knuckles as a game, seeing as I had to connect Sonic & Knuckles to Sonic the Hedgehog 3 to actually play the entire Death Egg Saga.

Yes, I recognize its supreme awesomeness and yes, it's the best "game" ever. But Sonic & Knuckles is the greatest single cartridge game ever.

Doesn't look to fun to me.

Plus, what are you talking about? You have to connect the two cartridges? Pff, I glued them together right when I got S&K, and now it's just one big cartridge!

Also... I'm thinking your Genesis/Mega Drive looks something like this? 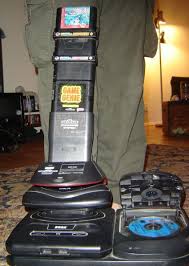 Lets just say I can use it as an escape ladder from my 2nd story bedroom if there is a fire.