UPDATE : Daniel Ahmad gave tweet that the Sega big announcement will be very interesting but at the same time he confirmed it wont be related to Microsoft

To add further clarification. Basically whatever this Sega news is won't be related to Microsoft.

" The patent states that

a controller that generates a game image of an object disposed of in a virtual game space; and

a touch panel connected to the controller and that:

Sega could be creating a hand-held console, or they are entering the Video game streaming industry like something similar to Stadia. Maybe they are just creating a mobile port for one of their games, but that’s not “On PS5 Reveal Event” Level, so there’s a big chance that they are creating their hand-held console like Nintendo. "

UPDATE 3 : Sega releasing Game gear Micro, further announcement and detail will follow, but it's still not the announcement that have been rumored for or waiting from famitsu scoop

UPDATE 4: Sega biggest announcement with big Famitsu scoop actually not Game gear micro, but Cloud service like "Stadia" but with Arcade gaming and for arcade ( something like playing arcade with cloud tech)

- yes, "Fog Gaming" is the "scoop"
- Sega will use arcades in Japan as the technical backbone
- CPUs and GPUs housed in arcade machines are mentioned specifically
- ultra-low latency is touted
- commercial idea is to use arcades outside business hours https://t.co/LWOiYuDAYj

The “huge scoop” teased by Nishikawa is that Sega is doing research and development on “Fog Gaming,” a potential new game platform that could be utilized by Japanese arcades.

Fog Gaming would repurpose arcades across Japan as part of the cloud, as well as channel arcade game machines’ CPUs and GPUs, resulting in lower costs. This would provide ultra low latency, and the concept is similar to fog computing. Players would be able to enjoy high-quality games, and arcades wouuld be able to make money even after business hours. "

So in a nutshell, game arcade don't have to provide a hardware cabinet wit local CPU, GPU, instead what they need is just an internet and monitor with controler It's like Stadia but this is for Arcade

Well, the latest "Sega rumour" that's going to rile up the gaming industry is, yes, Sega ARE releasing a console...

But, it's the Xbox Series X in Japan, MS are rebranding it under Sega's name to gain a better foothold there.

So, the Sega Series X. 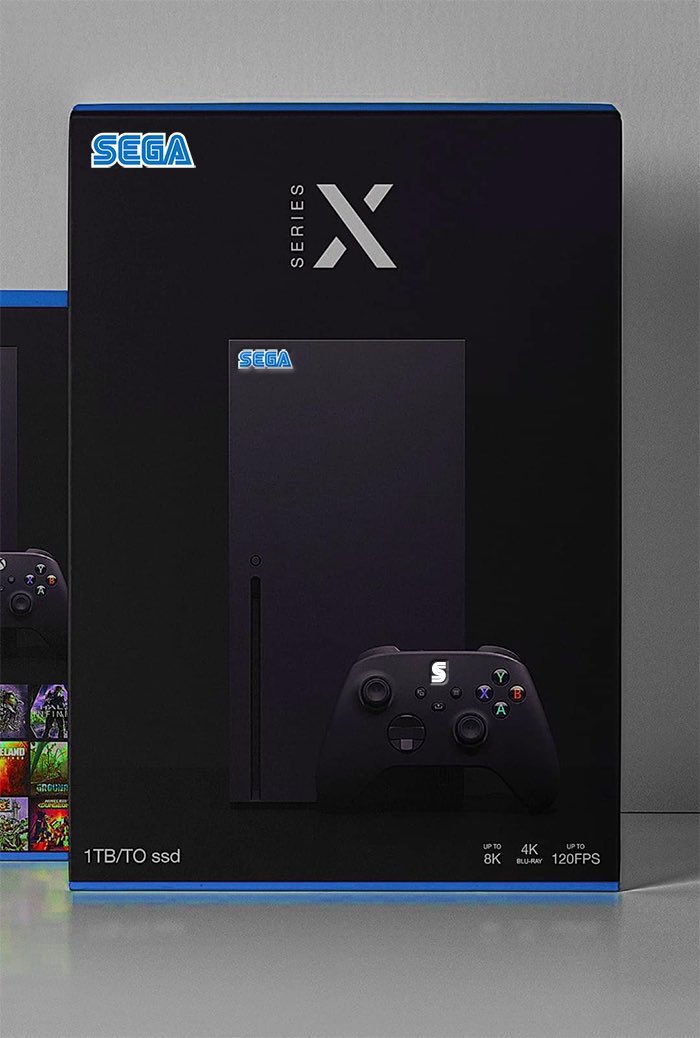 We know the Xbox brand didn't sell well in Japan, and most Xbox fans are an ex Dreamcast supporter, but to even dream of changing the Xbox name to Sega???

But the problem is not about the rumor, i don't mind if it's correct or true, but about their mindset and how they Love "Sega" instead of "Xbox" ???

Do xbox fans really love Sega much, or do they love Xbox because at that time xbox is just a replacement for Sega fan base, Or do Xbox fans hate Xbox and make they want to change the names to Sega???

Does this mean Xbox is going to buy SEGA? That would be insane!

I would happily buy a SEGA Series X in the US. Fuck yes.

Not happening though. It’s a deal with Nintendo or Sony for some stupid shit.

And honestly, alot of things line up. As people already know by now, MS is basically dropping out of the console race, and it's more interested in selling their services and games than anything. If partning up with Sega achieves that, by buying them(Extremely unlikely) or just doing a deal of sharing the profits in exchange of the name( far more likely), then MS is up to it.

Remember, MS is porting their games to Nintendo consoles. Nintendo!

The only weird thing is Sega doing that but still making games for the other consoles. But hey, we are living in strange times.

It's just a dumb rumor and even if it were true, it has nothing to do with Xbox fans. A move like that would be about Japanese gamers who don't care about the Xbox.

Microsoft would have to pay north of 5 billion, it's not happening. The above rumor is even more ludicrous.

Seems unlikely. But, if it's true, it's nothing but a good thing for both brands.

It'll actually be pretty funny if it were rebranded to Sega in Japan and most Sega games still skipped it.

They spent what, 2-5 billion on Mojang for Minecraft. They would absolutely buy SEGA if they were that cheap. And they've been talking about acquiring Japanese studio (s).