The first Zelda to grace the 3DS was OOT:3D. It was a port of Ocarina of Time for the 3DS with improved graphics and 3D display. It took a load of work to emulate the N64 sounds on the 3DS since they use different sound drivers and hardware. The graphics were revamped to look closer to a gamecube game and even Link's movement was improved to look more fluid.

Well, of course we're all anticipating a port of Majora's Mask for the 3DS, but I want to speculate on a fully original Zelda title for the 3DS.

I strongly believe that the next new Zelda for the 3DS will be either a sequel to Ocarina of Time, or a game that looks and feels like Ocarina of Time but a whole new story. It will have grahpics and sound from OoT:3D, and will be co-developed by Nintendo and Grezzo. 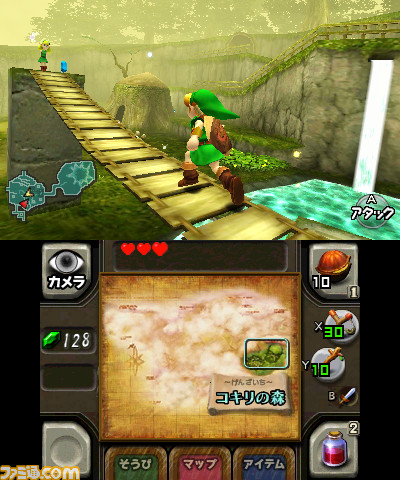 I suspect Nintendo EAD would want to create an original adventure for the 3DS. If anything, I'd suspect a tie in to either Skyward Sword or a prelude to the next console Zelda.

The one million dollar question is: Do handheld Zelda games have their own development team inside Nintendo? I know all internal Zelda games are made by Aonuma's EAD group but I think it is split up into two teams, one making the handheld games and one making the console ones with developers switching between both strings at different points in time.

What we know is this:

So yes, I think your prediction of a new game co-developed by an outside studio (not necessarily Grezzo, but why not?) makes sense.

I really hope this new Zelda 3DS game will be awesome. I thought that Spirit Tracks was really enjoyable.

What I think the next title will be within the WindWaker - Spirit Tracks timeline. The only reason I think it will be this is because of what Aonuma said.

He said, "Well, to tell the truth, we’ve already set sail in a new voyage.". Of course this does not mean it will be within that timeline, but that's what I believe.

To be even more exact. I think the title will be about the discovery of New Hyrule, which is what I have been wanting for quite some time. However he could have meant it as a Home Console Zelda.

T.P graphics. Add in some spirit tracks, wind waker, and skyward sword. Can we go back to traditional zelda now that we have travelled the oceans, hitched a ride on the Hyrule express or flew through the clouds on your loyal companion? Obviously the world has spoken. They do not want Wind waker graphics or whatever happened with Skyward. We want an adventure like OoT or Majora. Lightning has struck over and over again for this series so it is not such a tall order to expect it again. We are not saying we want the same adventure, but just give us the spirit of the two N64 beloved classics. Then you will he on the right track.

With only two exceptions (the Oracle games and Minish Cap), the handheld Zelda's are made by the same team as the console Zelda's and simultaneously. If I understood it right, the amount of people working on a title depends on the stage of development. If the need is high on the console title, most people will work in that 'sub-team'.

This information is hear-say though

OT: I think the 3DS title will be similar to OoT3D, ditching the DS interface style in favor of the traditional console style. It will have it's own look though, depending on when the game will take place in the timeline probably.

Well, if i recall correctly there was a little hint left by don`t remember who (it`s on 3DS' mailbox) and i quote: "... the New Legend of Zelda...".
I would love for that to happen!

Graphically, there`s a good chance that Nintendo will use some engine already created. Don`t think Nintendo ever designed anything specifically for a handheld Zelda.
So, we could, in my opinion, see something close to LTTP or SS (engine never used on a handheld before).

I reckon RETRO might have a hand in developing the 3DS ZELDA. Ninty might not hand over the console games but it has been willing in the past to share with the handhelds.

I'd love a non-Nintendo Zelda to appear and show up Nintendo's effort. I think people want to hit things with a sword and current Zelda games seriously undervalue that (in favour of puzzles and dialogue and 'art style').