Well, it is Pikmin, the first game. 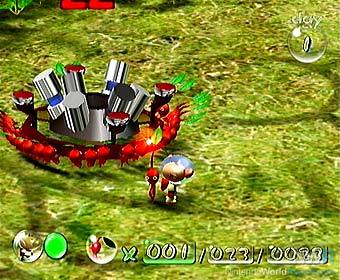 On the gamecube crashed the spaceship Dolphin (named after the codename of the Gamecube) on a strange planet. Captain Olimar had 30 days to find the missing parts of his spaceship, before the life-support system fails. Luckily he finds creatures he calls Pikmin that are eager to help.

This was the first game, which combined puzzles, exploration, fights and cute fun into a great game.

The game itself was release on Gamecube, but a Wii-variant with support for the Wiimote was also released with the additional title 'new play control!'.