I must admit that the one thing PSAS is lacking is excitement. Does anybody remember how Nintendo set up Smash? I was young and remember seeing a commercial of Mario, Pikachu, Yoshi, and im not sure if Link was in it or not, and they're skipping thru a meadow, next thing you know they're kicking the crap out of each other! From that point on I was sold. From the moment PSAS was announced there was nothing about it that really caught my interest. None of the characters match and even if it isn't, it comes off as a copy cat of Smash. Even Mario and Sonic at the olympics did well to build excitement for itself.

arguments aside it's a good effort in the genre for the sony side to play,is that fair

This is like comparing Super Street Fighter 4: Arcade Edition to Ultimate Marvel VS Capcom 3............ how the fuck do you even compare them?

but, but....2D fighting games!  They must be a clone of one another!

You know, for some reason, after reading your reply, I started thinking about Riverside City Randsom just now, because a lot of those spin offs are actually fighting games, like the gym series, the olympics series, even their dodge ball series are all pretty much fighting games. Then all of a sudden, Power Stone 2 popped in my head and the universe just blew the fuck up, where the fuck is my Power Stone 3!?!?!?! Power Stone is the fucking shit! You don't. Contrasting them is a much quicker way to find out what is different, and therefore what isn't.

I honestly cannot say that it is better or superior in terms of gameplay/mechanics from an unbiased perspective. I can however say that I like PSABR a ton better because I love these characters. Granted, I haven't played all of their games but I knew exactly from what games they came from. Nintendo characters are just a tad too childish. Just a tad.

I always enjoyed playing Smash bros brawl when i would go to my cousin's house and we played it on his Wii. I mainly used Link but god knows, I was terrible at it and as I said, I just didn't like the roster. You got like 7 mario characters, 2 or 3 different links, Ganon who is basically Captain falcon, I hate kirby with a passion, metaknight was a dick, and the rest I didn't even look at.

Being a Sony fan, I'm not ashamed to admit that I think this game is way better than Smash bros. The moves, the characters, the stages (I wish they had more and can't wait for the DLC ones) and the theme music. All of it, it just works for me. Love the whole super thing because you have choices on which super you see fit for a fight and sometimes they are a bitch to land.

yeah, I definitely think one way that Playstation All-Stars outshines Smash Brothers is in the dynamic, mixed stages.  Smash Brothers has MORE stages and a level builder, but those mashups in All Stars and the way the levels are constantly changing and updating while still being the same is...for lack of a better term, unrivaled.

This is why, in my review, I made a point to say that I hope this game becomes a series, becuase a sequel could be game of the year material if they improve it as much as Melee improved from the original. 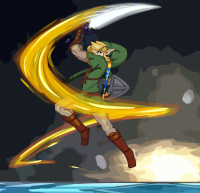 It's not ridiculous. I said two beginners.

It's like playing paintball for fun with some other newb friends, giving one a regular gun with weak aim and another a semi-automatic with good aim. It's no fun.

And also, you don't need to say shit like my opinion is ridiculous, it's not needed. Especially when the point is debatable.