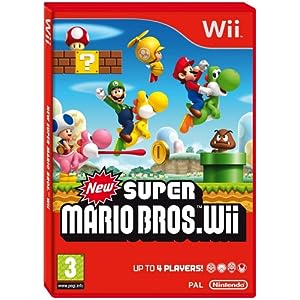 It still surprises me that Nintendo took this long to release another home console 2d Mario platformer; I doubt they will repeat that mistake given the phenominal sales of this game.  This game is a blast in single as well as multiplayer, I also really like the increased difficulty towards the end of the game, something the DS game was missing

While I think this game is overrated, it is still fantastic and one of the better FF games.  This was the first FF game to be released in Europe and also to break into the mainstream gaming mind in the West; therefore it is many people's first FF game and also RPG.  I love this game's music, particularly One Winged Angel, the Main/Map music and Aerith's theme.

Pressing return on it's own creates a new paragraph (with a space between lines) to just create a new line hold shift while pressing return.

@SinZinDetta: In the quick reply box hitting Enter will skip to the next line. In the rich text reply box, hitting Enter will change paragraph so you'll get a space between your lines so in that situation what you need to do to get a new line is Shift + Enter.
Like this!

There, fixed it for you xD

Aren't we a helpful bunch

Man I was all over it. Nothing was gonna stop me. Finally, a problem around here that I can actually resolve myself!

And TWRoO went and stole your spotlight! Shame on him!

TWRoO used smoke and mirrors. I was the real deal!