I hope you all do realize that they took the entire first part of the story out of the demo, right? 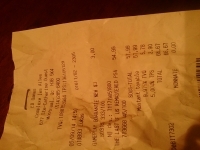 i played the demo yesterday i love it , th only thing that loks weird was the story .. will see ....

The game appears to be too human then. Todays gamers expect divinity.

Considering that the game comes from SK and, as i've understood, the theme is similar to ED, i was expecting this to be a great game. Especially from the storys part.

only a couple of more days and I'll be playing the actual game, can't wait.

No other reviews of this game yet?

Game Informer?  Never heard of em before.  Must not be very credible or relable then.

Well, Game Informer is one of the more important reviews if only for the amount of circulation it gets, so things aren't off to a great start. The game hasn't flopped yet though.

We had two bags of grass, seventy-five pellets of mescaline, five sheets of high-powered blotter acid, a salt shaker half full of cocaine, a whole galaxy of multi-colored uppers, downers, screamers, laughers…Also a quart of tequila, a quart of rum, a case of beer, a pint of raw ether and two dozen amyls.  The only thing that really worried me was the ether.  There is nothing in the world more helpless and irresponsible and depraved than a man in the depths of an ether binge. –Raoul Duke

Yeah, it'll do that next week.

Game Informer is the worst. It is the freebie handout magazine with a gamestop card. Many of their reviews are written before final builds of games have gone out to the press.

The game will not be any better or include more content then planned. Any commnets that say so are just PR hogwash to make you feel better for having to wait.

Delays are due to lack of proper resources, skill, or adequate planning by the developer.

Do be thankful that they have enough respect for you to delay the game and maintain its intended level of quality.