Are you just trying to advertise your channel with clickbait?

And here I though people in VGC say the market is stagnant with the userbase of PS2+Xbox Org+GC = PS3+X360 = PS4+X1, etc so the market isn't much bigger than in the past. And during launch the market to sell the games is usually smaller unless you go crossgen.

Personally, I'm not a fan of this penny pinching version of Sony, but that doesn't deter me from spending $70 when I feel the game is worth it.

The console games market is stagnating, not growing. The growth is in the mobile sector. The console pie isn't growing much anymore.

Companies diversified their means of income because they wanted to avoid increasing the base price. Those margins from DLC, MTX and digital are fading now as well. If you hadn't noticed, game companies are getting bought up left and right. That's not because they are making record profits... 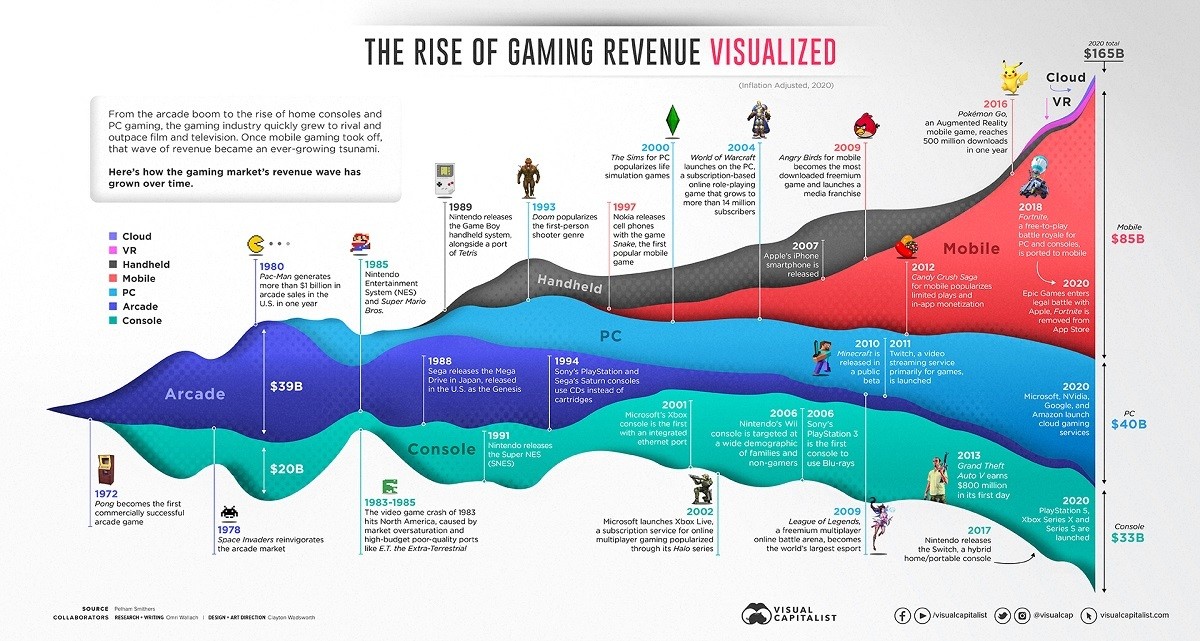 The growth in console video game sales is gone. There was an uptick from the pandemic, but that didn't last and now inflation has gone from 3% a year to 10% in some places. Look at an inflation calculator and $60 in 2005 is $90 in 2022. MTX, DLC and better margins on digital don't cover that.

Console will follow the same path as handheld and arcade and will be barely visible in 2035. The question is though what will pc do. Because if games remain 60 euro, it will become non profitable for many AAA Devs sooner or later. Not every company can release relatively cheap games to make and sell millions of them.

What a fantastic graphic that should drive home the point.

True, A lot of PC games are 'subsidized' by console games. Without the better margins on console game sales, even if all console gamers continue gaming on PC, there will be less revenue and thus smaller budgets. Yet maybe PC can continue growing. Otherwise games will become dependent on streaming and more and more F2P. That will definitely impact how and what games are made.

But it's also possible consoles stick around. It's still the easiest way to play bigger games in good hassle free quality. The 'hangout with your friends online' setting isn't the same on mobile. The next generation is playing on console. My oldest kid is hanging out with his friends in Rust and other games on console. My youngest is more into PC, playing Roblox, Minecraft and Fortnite on Switch.

Handheld market was taken over by mobile, yet will streaming similarly take over console gaming? And actually the handheld market is still alive in the Switch. Part of that console revenue in that graph is from the Switch which is more handheld than console. Plus now we have Steamdeck as well.

I do think streaming will take over console in the future just like it done for renting movies, but as said before that is something that will happen several years from now. If gaming becomes something alien to what I have today I'll probably retire and only play what had launched before. I'm not the multiplayer online gaas type of guy.

Streaming remove the biggest constraint from consoles and PCs:

- High price entry: Buying a machine to then play is the reason why console+PC gaming is nowhere near as popular as music or cinema, even though is a bigger market when it comes to revenue

As much people here turn down on streaming is the only feasible way I see for companies to keep making their single player AAA games. The only reason why movies budget kept increasing is because enough people was going to theaters to make them financially viable.

Multiplayer games are a different animal, they are interactive, easier to monetize and keep on market indefinitely until you recover your investment and provide a good income baseline for as long the publisher find worth it. Plus the interactive nature of such games make them more feasible to reach wider audiences thanks to good word of mouth

Also those games has much bigger shelves life. When FF XIV launched I'm sure an entry level PC couldn't play it. Today almost any PC can run it effortlessly, meaning the game was designed for high specs, but the natural course of time will naturally make it feasible for casual gamers who don't buy dedicated hardware

Which leads for the second biggest constraint of PCs/Consoles:

- No more need for upgrades. The game will launch and can reach a big userbase right of the bat

I don't see consoles disappearing, but I see at best 2 more generations (roughly 20 years) with consoles being the focus of manufacturers. Xbox is likely to be the first one to give up, which will lead Sony and Nintendo profits to go up enough to keep more generations going and provide a much more smooth transition to streaming. Hopefully internet will be good enough to not compromise experience as much as they do it today.

Even though I see the future heading toward streaming with multiple services similar to Microsoft’s GamePass, I think that for as long as gaming PC rigs still exist, there will be a need for consoles for those who want a native yet [mostly] hassle free options.