Forums - Movies & TV - Why are certain old movies not being ported to Blu-ray?

Dog Day Afternoon 1975 movie, latinos rob a bank then demand to let be free the ending scene is epic don't watch spoiler imdb has it 8.0

Lol no. Blu-ray looks so much better than streaming, the difference between 1080p Netflix running at 5mbps and blu-ray running at up to 40 mbps is instantly noticeable, both using h264. Blu-ray goes up to 54 mbps but that's with multiple soundtracks. At 54 mbps a 2 hour movie fills a dual layer disc. Definitely not overkill in capacity and you can still see pixelation on blu-ray in fast scenes from the compression.

4K netflix only runs at 18 mbps, uses h265 though, with that it's comparable to 1080p blu-ray quality. You get a sharper image in slow and static scenes, yet blu-ray handles moving scenes better. 4K blu-ray looks great when done right and can go up to 128 mbps is busy scenes.

Only very early blu-rays used mpeg2 since h264 wasn't ready yet. Most of those were replaced later like The fifth element.


If people are tired of upgrading then why buy a 4K tv or later 8K? Streaming took over since it's simply more covenient. People aren't tired of upgrading, people simply go for the easiest route with least effort. Proof is in digital game sales which on average cost more than a physical copy. People always blame retail shops for keeping the digital prices high, yet why would publishers lower them when people don't mind paying extra for the convenience of not having to get up from the couch. Same for streaming, already with mp3s people didn't mind lower quality not to have to switch discs anymore.

Those discs suck and get scratched. Early CD players used to destroy disc in one or two playings. What eventually happened was ripping. People ripped cds to computer to preserve their purchase. Best format to listen to your own collection these days? USB drive

Out of all the CDs I've bought since the 90s and still buy, only one has a scratch that makes the player skip in that spot. But I've seen how people treat their CDs so it doesn't surprise me. I've never had a CD player destroy a disc. (I have had memory cards and USB drives that stopped working)

People ripped cds to computer to share them... I still use CDs in the car, never any issues, sounds great. At home I prefer blu-ray for music, DTS HD MA 7.1 sounds much better than any streaming. Although I often just put the radio on, good old FM stereo. I never got on with mp3s and USB drives. I can't see from the outside what's on a USB stick... Plus my Amp keeps crashing when connected to an iPod, useless.

Anyway, I'm glad the music I like is still released on CD. Much easier to keep track of.

Usually because the source material is of such low quality that there would be no benefit to a Blu-ray release. In other cases, it's because there's no market for the Blu-ray. A lot of the time, it is probably both of those factors.

I've been thinking about starting to collect some blu-rays for my favorite movies. Kinda annoying that only a few have Ultra-HD 4k releases.

Can't wait to get my hands on this one soon: 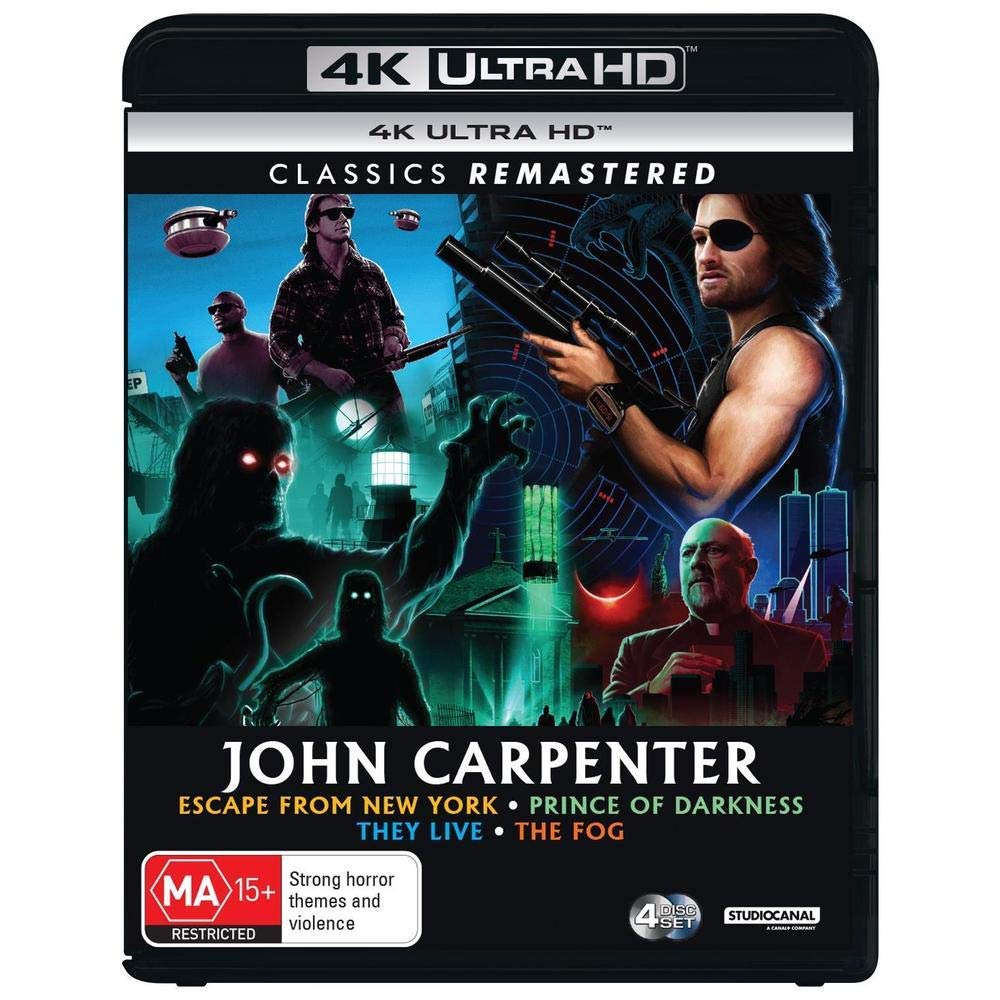 Out of those 4, the only real classic for me is Escape from New York. Could live without the other 3 but hell, might as well get all four if it's for a similar price. (Wish they swapped "The Fog" for "In The Mouth of Madness though)

I couldn't stop laughing from this stupid movie Prophocy 1979, The kid in a banana sleeping bag hopping gets swatted to a rock and explodes into feathers I dont want this movie but I gotta see the rest of this movie