Japan is mobile country now. I expect the rest of the world to become mobile slowly as well.

They already are, honestly: smart phones are everywhere.

Does Xbox have to have Japanese games made by Japanese game developers to do well in Japan?  The Japanese market is already flooded with Japanese games.  Sure having a few couldn't hurt, but you would think they would be interested in new western RPG's because of the lack thereof on the other platforms.  Switch does have games like the Witcher 3 and Skyrim and Kingdom's of Amalur, but they are dated and could be played on Playstation.  The way Japanese games appeal to me in the US, I would think the opposite could be true as well.  I don't think Xbox should try to be like the competition. The different type of games from what they already have access to, should be the appeal.

That's great news. All ms needs to do is buy some Japanese developers and lock the games to pc and xbox and put it on gamepass day 1. That will increase it even bugger than what 360 achieved

From my limited viewing of the Japanese market well known Wrpgs tend to have a similar sales pattern in line with other western games of similar stature, in that you often see them release at the top of the weekly chart or close to it with sales in the hundreds of K's but unlike those Japanese counterparts with similar opening sales they drop away pretty quick.

If the XBOX Series consoles continue to sell at this rate, it could be the most successful XBOX console in Japan. I know the 360 would have sold more but it took a lot of promotion for it to do what it did. Likewise the progress it did make vanished overnight after Final Fantasy XIII launched. 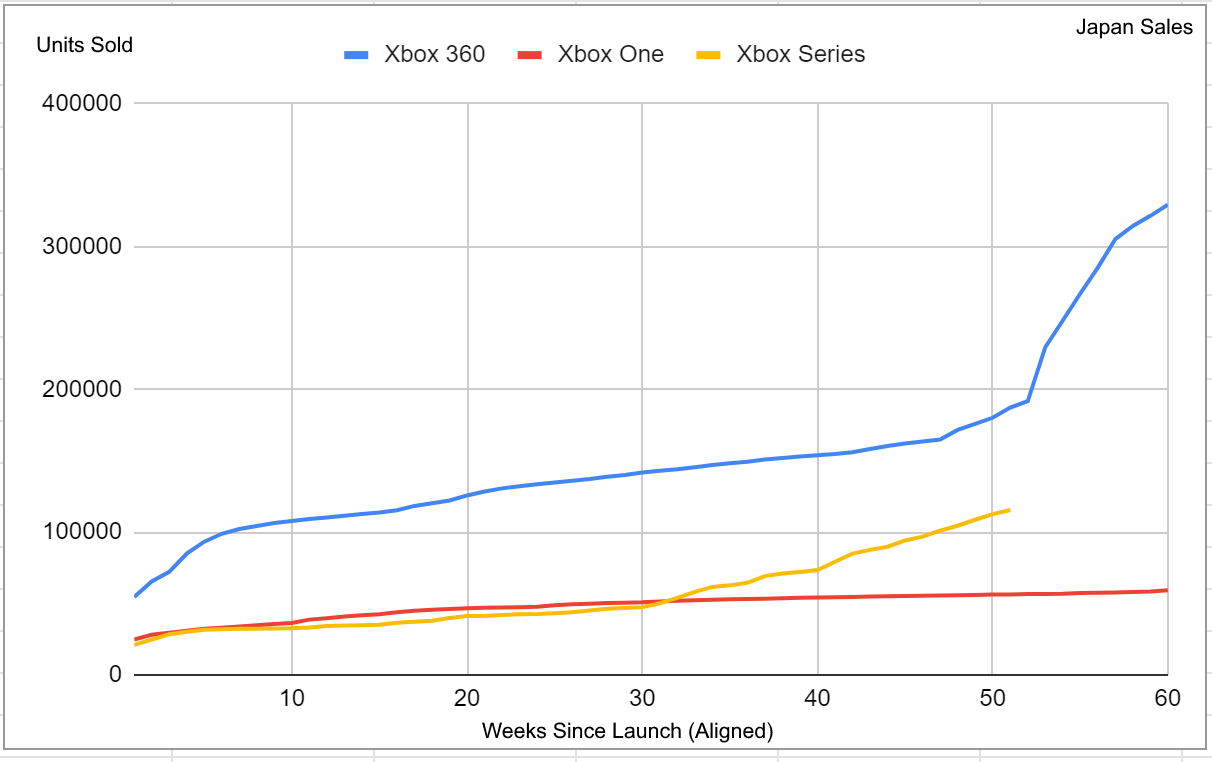 Xbox Series isn't terribly behind the 360 though still a hefty amount, 115k vs 187k but the gap has shrunk since week 30. It's not unrecoverable however 360 is just about to get the Blue Dragon launch which catapulted 360 sales in Japan, not sure if Xbox Series is going to see the same kind of boost this holiday and if it doesn't get a boost like that the fight with the 360 might be over.

No idea what happened with Xbox One. 30 weeks in it's ahead of Series and then it just completely flatlines and never recovers.

"love" is a strong word. Better but still bad.

No chance in hell is that happening. Nor should it. No one should own them. Let them be the great small company theyv'e always been. This would more likely kill them than anything.

They really should, especially with the Xbox Series already outselling the Xbox One in Japan. Unless there's some kind of exclusivity deals, Persona 5 Strikers and the upcoming port of Persona 4 Arena Ultimax should be on Xbox. And some more main titles like Persona 4 Golden and Persona 5 Royal should be available as well.

If the Xbox Series sells over a million in Japan, that's probably enough to be successful by Xbox in Japan standards.

Yeah it's a pretty lukewarm love affair if they were married both parties would be sleeping in different bedrooms, I suppose the best that can be said is compared to the Xbox one they actually live in the same prefecture and they do seem to aspire to the lofty heights reached by the 360 of having once made fleeting eye contact.