Forums - Politics Discussion - Holy shit, Canada's having an election! But why?

So it's done and that was one big waste of money lol. I don't think there ever was an election in Canada with so few change from the prior election.

Results may still change a little but should be close enough now.

The best part is this all led to just finding out that the PPC, who was basically ignored, is way more popular than most would've imagined.

The Cons would've been neck and neck with the Libs if those PPC votes had gone to the Cons as they likely would've in the past.

In 18 months, or later, regardless, the next election is going to actually be interesting. 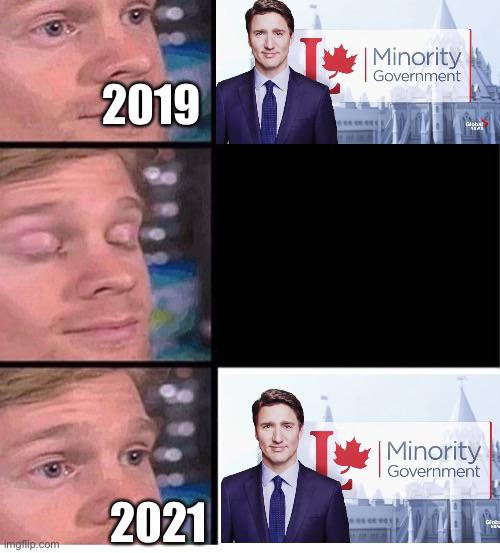 Lots of heat getting thrown at the Alberta Con Premier now, for covid reasons, apparently. Though this has been a focus of the media just prior to the election coincidentally, yet was disregarded for the most part by everyone else. Odds are pretty good it's just the Cons playing the blame game due to the loss and the Libs and media taking advantage of it. Alberta damn near went solid blue (Con) in the election so it's pretty unlikely the people there are too worried about the Premiers actions. An easy target that will likely have it bounce off him like DJT so no harm done overall.

Also got the Ontario Con Premier now changing his tone again about vax pass. Just a minor temporary thing and not a full out rollout everywhere like some were suggesting. Which isn't surprising because Con voters are mostly against vax pass here and they are who got him elected, so since next to nothing changed in Ontario as well, he might as well stay his past course for the June 22 election. Unless of course he wants to run for PM in 23 or later, because he would have a much better chance than the last two Cons did. His best bet would be to pass on the next Ontario Provincial election, become CPC Federal party leader, then run for PM in 23.

Yeah there wasn't much point in holding this election and the population clearly opposed doing so in the first place. That I think is the bottom-line message here when you look at how low the turnout was and also how similar the outcome was to that of 2019. To that end, one has to really dig for anything of interest here. Nevertheless, if you look hard enough, you can manage to find some interesting little details. I'll highlight some of them below:

1) Prime Minister Trudeau was more popular before he called an election. Here's how the Liberals were doing before Prime Minister Trudeau called this election. As you can see here, the Liberals were averaging support in the upper 30s, benefiting from an effective vaccination campaign, among other things. But once the Liberal leader opted to politicize the matter, support dropped by several percentage points and never recovered. The people have wanted the Covid crisis to be a moment of unity wherein parties rise above politics and put their countries first.

2) All Conservative pick-ups were in the east, while all their losses were in the western provinces (namely British Columbia and Alberta). See what I mean? This logically resembles a something of a long-term trend that's been happening here in the U.S. over the course of decades wherein Democratic Party strength is increasing slowly but primarily in the western part of the country.

3) The People's Party vote didn't collapse like it did two years ago. The 5% vote share they got was lower than where they were polling, but that's typical of minor party support. The major parties are the Liberals, the Conservatives, and, in Quebec, the Bloc Quebecois. People want their votes to count and to that end more on-the-fence voters who indicate preference for minor parties often wind up actually voting for one of those three in the end. The result is that the major parties typically fare a little better once the votes are actually counted than they did in the polling, while minor parties typically fare a little worse in the actual vote than the had in the polling. But in 2019, People's Party support just straight-up collapsed when it came time to vote. Their final polling average had been 6.5%, but they actually wound up with just 1.6% of the vote, as their supporters reverted to their previous home in the Conservative Party. No such thing happened this time around: their polling average was similar here in 2021, but actual voter support fell only to a flat 5% in the end this time, indicating more disillusionment with the Conservatives on the right. This share of the vote may indeed have been the difference between the ability of the Conservatives to form a government and not, possibly. Nonetheless, PPC support was so thinly spread that the party once again failed to win any seats, so their campaign was just simply a drag on the conservative movement in practice. It may signal a need of the Tories to shift a bit rightward going forward in order to win back some of these voters, but not so far to the right as to alienate their more moderate branch in the process.

4) Speaking of minor parties, Green Party support collapsed. In the 2019 election, Elizabeth May's Green Party had gotten a party record 6.55% of the vote and tripled their parliamentary representation from 1 to 3 seats amidst the ascendancy of the global Sunrise movement that benefited environmentalist parties the world over. The Sunrise movement has stalled though after the coronavirus outbreak and the new, social justice-oriented leadership of Annamie "my jaw dropped" Paul has added internal strife within the Canadian Greens to this mix. The result was a net loss of one seat in the federal parliament and their lowest vote share in 21 years: just 2.3%. Notably, Jenica Atwin, who was elected for the Greens in 2019 and defected to the Liberals earlier this year over the former's new position on the Israeli-Palestinian conflict, was re-elected for her new party, and former Green Party leader Elizabeth May won election to a fourth term in her riding as well. By contrast, current Green leader Annamie Paul failed in her third attempt to reach parliament, this time falling from second place in a by-election for the same riding last year to a distant fourth for the same seat. Of all parties, the Greens lost the most in terms of vote share, even falling by about half compared to 2019 in the hypothetical student vote. It goes to show that Paul is no Elizabeth May and to which end it is time for new leadership.

5) The New Democrats can't unseat Liberals. As you can see at the link in point 2 above, the NDP picked up seats only where the incumbent was a Conservative and there was no serious competition from the Liberals. By contrast, Liberal candidates managed to unseat two NDP incumbents. This reveals an underlying weakness in the NDP; that they're dependent on extraordinary circumstances for advancement. In fact, their tie-breaking pick-up was a seat held by Green Party, showing really Canadian the left parasitizing itself. The NDP's marginally increased vote share, in fact, in this sense is directly attributable to a parallel, but steeper, drop in support for the Greens.

6) The Bloc Quebecois had the only clean pick-up. The Bloc held onto every seat they'd won in 2019 and added one more, bringing them just one seat below the Liberals in Quebec; the only place they contest for obvious ideological reasons. All other parties with representation in the parliament won some new seats and also lost some. The BQ's support is the most stable, perhaps owing to their clearer message and cause.