A more meaningful separation: handhelds and consoles continue to run in their own categories and the Switch as a cross-gen handheld/console hybrid keeps its own field. PS5 and XBS are clear competitors in one filed and Switch is in its own field after Sony abandoned handhelds.

Stop being so salty. Jesus.

You will get your turn when the PS5 is at it's peak and the Switch 2 has just launched with supply constraints,  And you will like it!

no we should split the OG switch and lite sales

Switch serves most of the same functionality of these consoles though. Even if it does its own thing as a separate handheld, it still doubles as a home console, competes for much of the same market, and will likely have at least some of the same titles in some form. Whether direct or "indirect" competitor could be a matter of debate, but at the end of the day Switch still competes with Sony and MS in the home console space. It's unique, but to me there's more than enough overlap to warrant it being displayed in the same market, or "field."

Will the year to date chart be added ?

An even more meaningful separation would be breaking up Switch into home console and handheld console sales.

This means that Nintendo currently holds 184.9% of the total console market share.

Last edited by RolStoppable - 6 days ago

The current front page hardware charts look like this in my browser (I'm using Waterfox Classic in the newest version 2021.04.2, a Firefox option for older Mac OS): 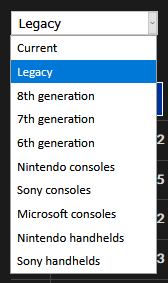 So where is "Sega consoles" and which color will it get?