Thanks for this. Yeah, I think despite all differences in the politics and even if we are on contrarian positions sometimes, it is important to talk to each other instead of shouting down differing opinions.

For the Filter: Open the Forum-menu on the top and choose 'My topics'. There you have a 'Show Filters' button on the top left, which opens a bunch of checkboxes. Don't forget to save after changing the settings.

I feel very much the same way about this. I consider myself socially liberal/progressive, but the more and more the 'left' is getting dominated by extremely authoritarian and intollerant views. I completely support the classic "forget the old taboos, you can do what you want!" side of the left, but I have serious issues with the new "you can't say/do that anymore!" side. A while ago I read something about free speech being a 'conservative value', which I found very worrying.

I've also noticed that the most extreme ends of the political spectrum over here are very much inspired by their American examples and copy their rhetorics even when they barely make sense. Unsurprisingly, these people are also the ones that are most active on sites like Twitter where the echochamber-effect is so strong that nuance is barely allowed.

Oh I know that it is (traditionally), but I feel like that is starting to shift. I don't believe that the intollerance towards free speech on 'the left' is already too problematic, but I do feel like it's gradually getting worse and it could get pretty bad in the future.

Overall the public impression recently has been that cancel culture is a left wing thing. But it is only some loud twitter crowd, classic left people are very much pro free speech. And not to forget, right wingers are fast to use cancel culture for their causes (and did this since centuries), but it is usually named differently, but still the same stuff.

Regarding the stuff about cancel culture, it's still not a left wing thing because the right wing has been doing it and continues to do it for ages while the left wingers who even want to do it don't have the power. Like right wingers are flouring on the net and social media, where they claim they are "cancelled" but a;; mainstream media basically banned left wingers from talking against the Iraq war, the patriot act, the Afghanistan war, etc before the internet rose to power. A few employees were fired for talking against these things and Jesse Ventura had a 3 year deal with MSNBC to do a show but when they learned that he was gonna talk against the war, they didn't air any episode and since it was an exclusivity deal, Jesse basically couldn't do anything else either. He was being paid but his voice was silenced.

Even now, other than a few congress people they have to bring on, left wingers rarely get a free and equitable representation in MSM of different countries. Jeremy Corbyn in UK, Jagmeet Singh and NDP in Canada, many voices in the US, India, Pakistan, France, Australia, etc. Right wingers get way more airtime. Most socialists are for free speech even today. Liberals are a different story and those people are culturally left while economically centre to right wing. There is still a much larger segment of people who are libertarian left wingers than there are authoritarian left wingers meanwhile rulers and people in power like the rich and wealthy are almost exclusively in the authoritarian right wing quadrant.

I would say this might be a decent representation of my views. Socially I'm Liberal, Economically I am moderate, and I'd probably fall into conservative or libertarian on topics like immigration. I'm mostly anti war and want the military funding to be cut. Abortion should be up to a woman. 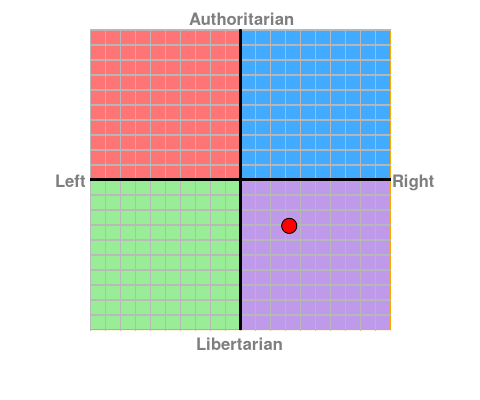 Enjoy. Right where I was 13 years ago when I started voting.

Yeah free speech is more of an authoritarian/libertarian thing than a left/right thing.

I fall somewhere in the middle on it.

On the one hand, I don't like the far left's increasingly harassing those who don't share their views and using "I'm offended by that" as a way to try to shut down differences of opinion.

On the other hand, free speech does not mean freedom from accountability. If I were to start openly preaching that "black people are subhuman and women shouldn't have the right to vote" social media platforms or my job would be right to deplatform/fire me respectively if they don't want to be associated with that kind of rubbish.

I mean, one could argue that talking on the phone is free speech, but what if the conversation I'm having it hiring a hitman to kill someone? I may not have pulled the trigger myself, just exercising my "freedom of speech", but I am still responsible for the resulting murder.

First of all, I agree partially. I want to go in more detail on some points or put a bit of a different perspective.

Hiring a hitman is a crime, and we can agree that platform holders should not support crimes. It is basically as simple as that. The current blocking of Trump and Trump fans at least partially falls into that basket, as they were inciting violence.

The problem I have with that, that I don't see a consistent line or rule, just some decision the company makes. That is more along the line you say above, if someone has the right not to be associated with that rubbish. These are profit oriented companies, it is possible to pressure them. Without clear rules about what they disassociate from, they could next be pressured by Creationists to remove content about evolution. Or content creators that talk against neoliberalism. I do fear that quite a bit.