Here's the rest in case you haven't seen it yet!

Why is the chart with hardware numbers not updating on the home page?

Sorry, what day will we have global sales with the figures for PS5 and Xbox Series X / S?

No exact date. I am waiting on for sales figures for the PS5 before posting the week ending November 14. Plus still waiting on @TalonMan to add the PS5 and Xbox Series X|S to the hardware chart. Since we rarely get new hardware it isn't as simple as adding a new game to the GameDB.

Posting here as there is no general sales discussion thread (or dedicated NPD thread).

Since NPD rankings are retail revenue, I think it's going to be quite an interesting and historic month.

Here's a scenario where NSW sells 2M, and PS5/XBS both sell 1.5M each, yet NSW comes last in NPD $$ rankings.  I broke down the Lite/OG, Dig/Reg, X/S splits as well. 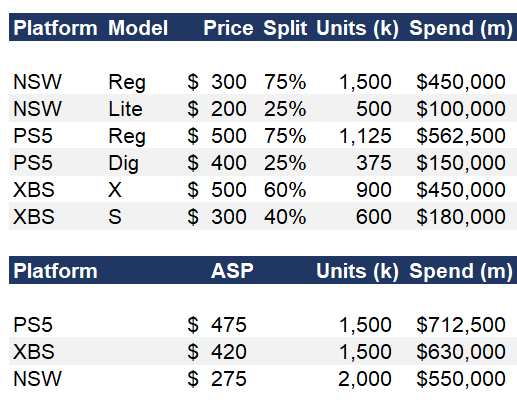 I'm sure NPD will specify that NSW led in units, but still worth noting.

Obviously, too many variables to truly know at this point in time.  Maybe NSW sells 2.5M with a lower Lite split and this doesn't even matter.  Maybe stock isn't there for the new consoles to hit 1.5M.  Either way, it'll be a tough road for NSW to win this in terms of NPD $$ rankings.

Guesses on Series X / Series S split?  I am guessing that upfront Microsoft would have wanted to prioritize moving the premium model during the holidays, but the Series S is definitely easier to supply.  I used a 60/40 split in my example above.

Here's a scenario that continues to show NSW's struggle to make the top spot for spend.  I bumped down PS5/XBS down to 1.25M each and bumped the Lite down to 20% and the PS5 still comes out ahead. 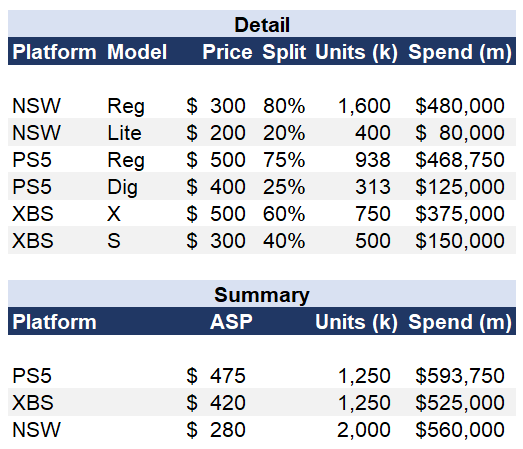 Due to pricing, there are reasonable scenarios where the order by units is NSW > XBS > PS5, but $ ranking is PS5 > XBS > NSW (example below). 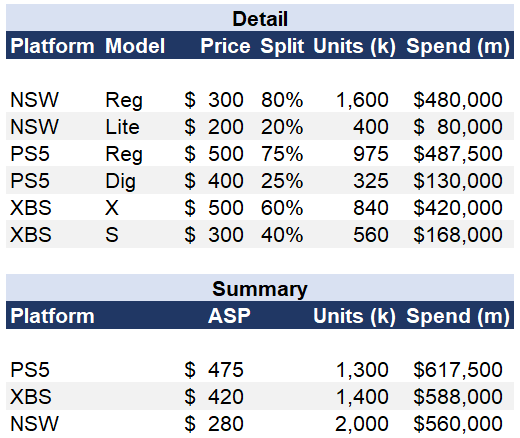 Have we ever had a situation like that before?

why we don't get numbers here