Well, feels like it's come out of nowhere (I was even following some of the rumours), but there's been a massive drop for Attack on Titan season 4.

I saw Fall 2020 as the expected air date earlier today, but not sure if it's confirmed yet.
Update: Airs December 6 at 12:45pm Pacific Time on Funimation and Crunchyroll.

Gonna be a compilation movie in July for the previous seasons. Probably only in Japanese theatres, so pretty irrelevant.

Most importantly a Key Visual and full-on 2-minute PV:

It can't be stopped anymore.

Ooooh Sweet Jesus, before my eyes see what's on that link, please make MAPPA as good as WIT. Are you there Jesus?......

I was actually, among all the story related sadness of the previous season, also sad to hear WIT was likely finished with the series. I was only going off of some twitter posts that were made near the end of season 3, and not official confirmation. I don't follow anime news at all really, only occasionally looking up a few specific release dates, so this is the first I'm hearing of the change actually happening.

Huge fan of the series. It played a significant role in getting me watching anime again after a roughly 2 decades long cessation.

Also, since this is the final season , any idea if they will be wrapping up the story in the anime, or will it fall short of telling the full story of the manga? 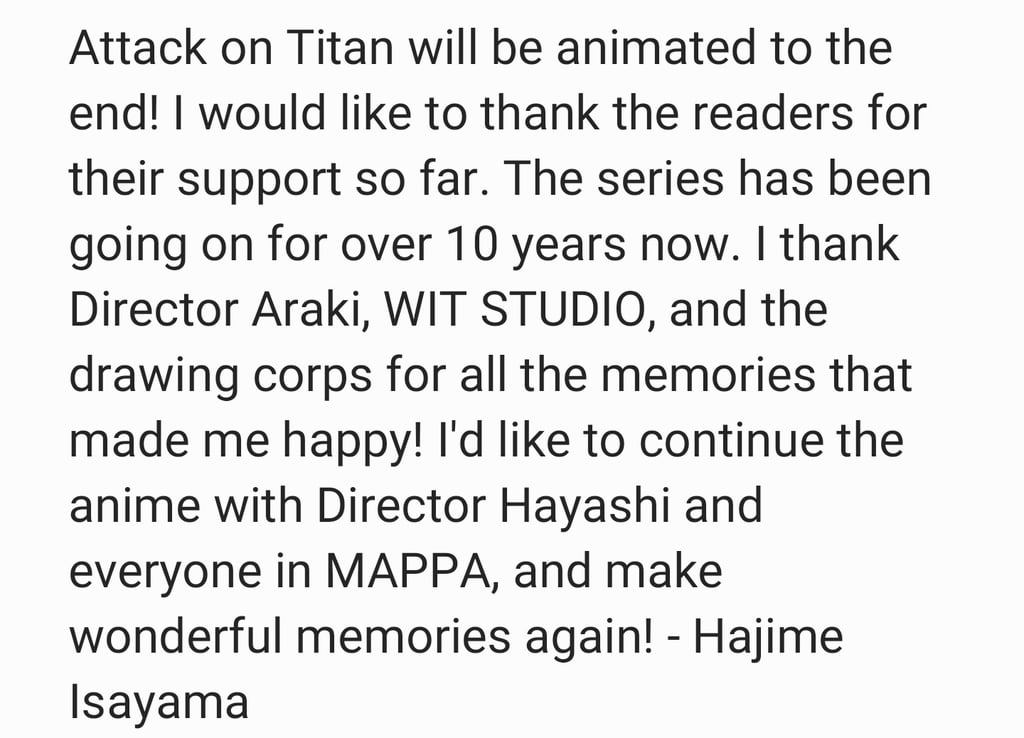 Just based on the preview I think MAPPA are a definite improvement over WIT, though it's still sad they couldn't finish it off. The character designs, outside of timeskip changes, do look closer to the manga in general. It might throw you off a bit when you see them though.

There's also some other small detail changes, like Mikasa's scarf being black now, which is manga related again.

I see the likes/dislikes and comments are turned off. I'm fine with the change in style based on what I see so far. It looks good, bit I want to see it again on a bigger screen and when fully awake.

So will this last season complete everything that's in the manga? Is the manga even over?

It will end the series, but I'm not sure it'll have everything from the manga. The manga is close to the end, but still has maybe 6+ more chapters/months left. Maybe even 10. That would stretch to about 3 cours (roughly 36 episodes) if they wanted it at the usual quality and pace, unless they want to cut out panels from the manga like they did with season 3 part 1. But no one wants that again.

Thanks for the update! :)

My disappointment at the new studio made an instant 180 when I saw the footage. Damn! One Punch Man season 2 this is not.

It's amazing they just had this crazy 2min video ready to drop and blow up. They know how to make a first impression. So many juicy panels were shoved in there, and they all look fantastic.