The vast majority still liked the movie in most statistics. So....

Definitely. I enjoyed ROS a lot. Only problem I really had with it was some of it was a little too fast paced. I think a big part of that is due to TLJ and the backlash it got.

Rey isn’t related to Leia though.

Rotten Tomatoes was review bombed a few days after TLJ released, the audience score was way higher on the release weekend. Since then things changed a bit on the site... ROS has almost 100,000 user reviews less than TLJ at the same point in time.

Meanwhile on CinemaScore it got a B+, which is the lowest of the franchise for audience reviews so far.

This movie was definitely stupid in a number of areas, though given what Abrams was handed with the Last Jedi - basically leaving no real cliff hangers except good guy rebels need to kill big bad kylo ren, & having to wrap up this massive story in 2 hours - he did what he could. The Palpatine appearance was cool but definitely felt a bit desperate like they felt they just needed to toss him in there to appease the fans. It's definitely super odd that he wasn't even mentioned in the rest of the trilogy then suddenly he's the big bad main villain we need to strive to defeat. And no explanation as to how he survived after Return of the Jedi.

It definitely felt rushed and all over the place at times - almost made up as it went along - though you really could say that about this entire sequel trilogy.

Hmmm, I don't believe I've ever seen someone rank Last Jedi as their #1 before (have seen a few ranked after Empire) but I suppose there's no accounting for taste.. You like what you like. I'm sure many "diehards" would shake their heads at my choice for putting A New Hope over Empire. Or Revenge of the Sith over Return of the Jedi.

To me, while there was plenty of cheese and head scratching moments, at least Rise felt like a Star Wars movie again, rather than some paint-by-numbers super hero film or something. Was fun to see the 3 main heroes just banding together and venturing out to get the job done, embarking on a mission in a number of different settings with escalating action. I liked the return to an emphasis on older characters like C3PO, R2, and Chewie. You could call it "fan service" or whatever but ultimately the point to me is to have fun watching it, which I definitely felt more entertained for far more of the film vs Last Jedi, which I tended to oscillate between boredom, confusion, and just a plain bad feeling overall.

Rise of Skywalker felt more like an adventure (like past SW films) where real events of significance took place, vs Last Jedi's "big ship chases other big ship," oh and we get a rip off of the beginning scene from Empire (it's SALT!) and a pointless insignificant b-plot at casino world. I felt like Rian Johnson mistook randomly "subverting expectations" & hinging on emotional impact (at the expense of logic & sound storytelling) with cool, thought-provoking plots which isn't necessarily the case..

To me Rise was the most enjoyable since Revenge of the Sith but still a major dropoff from that film. While I wouldn't go out of my way to watch it again like my top 4 favorites, it was at least interesting to see how everything hashed out and I was partly invested, which is more than I could say about the bottom half of my list.

Nah, understandable. In fact, I consider A New Hope and Empire about equal, and both by far the best ones of the entire franchise, but if someone put a gun to my head I’d say A New Hope wins. Revenge of the Sith is also great.

Overal your ranking’s similar to mine.

I liked Rise of Skywalkwr a lot, it was definitely better then TLJ, and I enjoyed the last Jedi as well. Though I know it has its flaws.

2. Return of the Jedi

9. Revenge of the sith

10. Attack of the clones

I see. Says there that what they changed since then was to not allow people to review a movie before it releases in theaters, to weed out comments from people who are unlikely to have seen it yet.
I'm sure that's for the better, and maybe other sites should try the same.

Speaking of "professional "Critics, user scores tend to get most of the flack (for good reason), but I don't think how unprofessional some of these critics are gets enough attention. Here's a recent example. 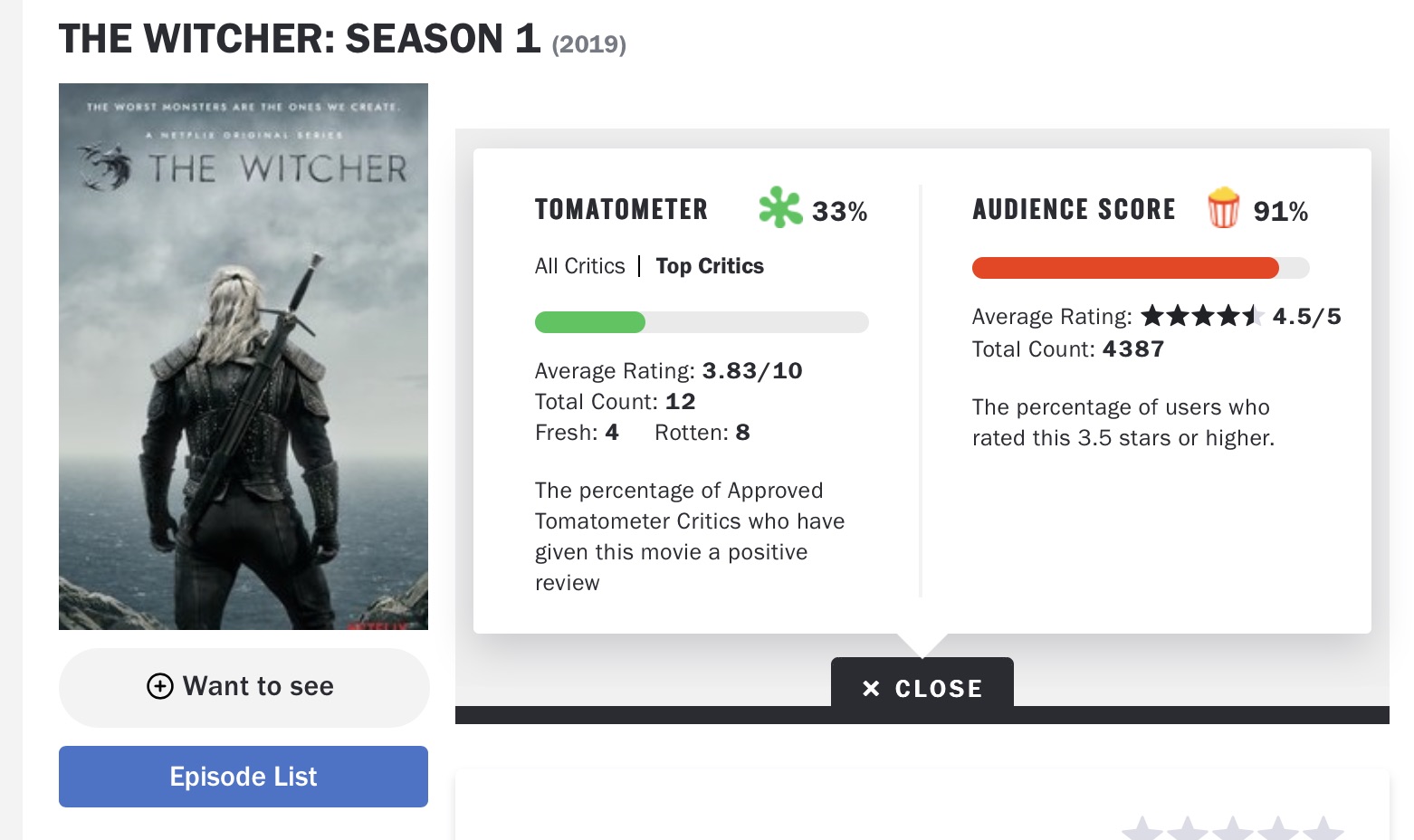 I got Return of the Jedi and A New Hope flipped and Rogue One my Clear number 5 with Rise of Skywalker 6 but other then that my list is the same.