When I set my profile to any Latin American city I am getting dozens of matches from girls within a day. Location seems to be really important for some reason.

Most men are getting only a 2/5 star rating from women. 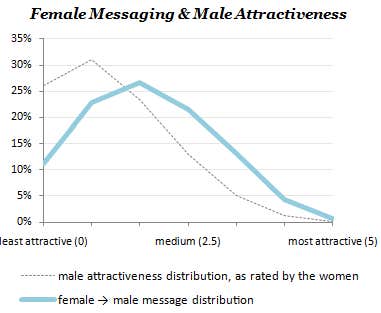 Well, I matched with this girl on Bumble halfway through May and got her number; while we cannot meet yet due to lockdown, we seem to really be hitting it off over text, I haven't connected so well with any woman in years.

We have so much in common; both love writing, film, documentaries, books, and history, both the sensitive/shy/anxious type, even both cancer survivors.

I recently disclosed to her that I was autistic and she was super cool and accepting about it.

Really looking forward to meeting her in person once this current outbreak is over.

One of the bits of advice that was posted by a popular Twitter account, and has legions of people agreeing, is that an invite to “hang out at my place” after a date shouldn’t be viewed as an invitation to take things to the next level. If you’re going to play Smash for 2-3 hours after a date, something went really wrong - I’d be surprised if both people walk away without thinking “What the fuck just happened?”

Asking girls out is easy with practice. If you make a fool of yourself the first 3-8 times, you’ll at least have learned how to do better next time. And while appropriate timing and context are important, generally speaking - five minutes is a good time to figure out what you need to do, and then to do it. It might be as simple as “We should chat more about ____.” And depending on the situation and comfort level, follow with: “Wanna 1 on 1 over dinner?” “Wanna grab a coffee?” “I hear ____ is a good place, Wanna grab a drink?”

The first few times you might read the appropriate response wrong, but eventually your head’ll be like “how the hell wasn’t I landing this so easily before?”
Eventually, you’ll be figuring out your way to attract the sorts of women with similar interests to you, or that has something you’re looking for. Want an extroverted girl, wear hot pink shorts or a really good hat - she might make fun of you for it, but don’t take offence - some girls flirt that way. Even if they’re not, take it as a flirt - even if she’s repulsed by you she’ll respect you more for it, and might tell your her friends about it.

The whole “nice guy” thing gets poorly understood. It’s the “nice guy” game that women hate, that is pretending to share a woman’s opinion on everything.
Girl: “Goo hoo! I’m a big fan Britney Spears! Toxic is my favoooourite!”
Nice Guy: “how nice!!! mine too!!! XD” when you actually don’t know anything outside of Nightwish, Metallica, and Megadeth.
Don’t do that. Unless she’s completely brain dead she’ll figure out you’re a desperate puppy in about 15 seconds.

But being an asshole and calling her stupid, most women won’t speak to you again. Just say that’s not really your vibe but maybe you like something similar. Read the conversation on how to respond. Maybe she wants a fight, maybe that’s how she flirts. Be good humoured about it, not a prick.

Talk about the shit you’re interested in, and when you actually find a common interest, then the conversation becomes fucking interesting! If you disagree on something, many people like to argue, women do too; and it’ll give her a chance to explain why she has a different opinion and perhaps even show you her music collection, and you’ll probably find something you like outside of your Nightmetalicadeth box.

If you’re going to tell her you like Toxic, you better have a fucking good way of demonstrating it. Like maybe play it on your phone and lip sync it perfectly… in a way that can only embarrass you, not her. If she does something to embarrass herself purposely, then you can probably move in for the kiss at some point. Flirt a bit to make sure.
If the kids goes well, and goes on, plant one on her neck, I have yet to meet a girl this doesn’t steam up in some wild way. A light tongue on her earlobe.

And I’m rambling, gotta hurry this up.
On the topic, is Tinder worth the money? Not really sure. I’d probably not pay for dating websites, and I’d focus more on meeting people in person. Which is gonna be a thing again in a few months. Maybe even now depending on where you live and if you got your shots.
I think parties, pubs, and groups (like volunteer stuff) are much better places to meet people.

Last words of advice: You’re not getting invited up to play Smash, just be yourself and things will be more interesting for both of you, and lick it before you stick it.

I can only speak from my own experience, but to give some people hope: it does and can work. I am a pretty shy person, and dating apps helped to take away that awkwardness and initial anxiety.

Some key things though:
1. You have to actually try and be persistent with using the app. It took me years to find "The One."
2. The app cannot do everything, you have to keep working on yourself, physically, and mentally.
3. Pay for the premium tier if you're serious, it does help. In the grand scheme of things, if you paid $100 to meet the love of your life, I would say that it's worth it.
4. Expect some bad dates. It just comes with the territory sometimes, lol. But, hey, it can be good practice anyway.

Edit: my success was on Tinder. Did not really have other sites where I was.

The hilarious thing is that in the end, while I used the free version, I did in fact end up meeting my new girlfriend on a dating app, just not Tinder. (Bumble)

I have started to use Bumble and I got about 100 positive swipes in 3 weeks (using the paid option to see who swiped on me before). In general it is more fruitful because woman have to text you first so there is more commitment in their conversations. However, I have been on 3 real dates so far and the main issue still remains, profiles are borderline fake, half of these women seem to be mentally unstable and the general quality is low. I had one date where the woman in question happen to tell me in a little subclause that she is currently divorced with three children, something that wasn't mentioned in her profile. With another woman I couldn't find any resemblance to her pictures at all. I fell like the very first step, to see and meet in real life, is so time-consuming that the juice isn't worth the squeeze. Most people would be better off talking to someone from the friend circle or the gym, uni, spa, campus etc. to skip that lengthy date setup.

Bumble stats: about 1 in 3 matches will actually text you and of these about 1 in 3 will go on a date, so expect a 10:1 match to date ratio.