This says a lot about the state of western voice acting.
As usual this will have absolutely no relevance to my appreciation of the game.

I like the way she sounds, and pretty much anyone would be an upgrade over the flat and lifeless performance Mena Suvari gave as Aerith in Advent Children and Kingdom Hearts II.

She has Triforce patterned wallpaper. So naturally I approve.

They shoved in an absolute ton in River City Girls and actually kind of alienated some people with it because it feels super unprofessional.

Why u Engrish OP?!

I like her. I had to say it inb4 Japos coming in to say her voice sucks because it isn't in Wapanese.

I hope there's a Japanese language option for the game. In general, I never liked English-language dubs of Japanese games for the same reason I never really liked most anime dubs. Sure, you get the occasional gems like Cowboy Bebop or Fullmetal Alchemist, but most aren't very good.

She seems to be a professional actress though.
https://www.imdb.com/name/nm4628145/

Bryan Dechart who plays Connor in Detroit is also a Youtuber/Twitch streamer on top of being an actor. Same for his wife.

Anyway, as for her voice as Aerith, it's much better than Mena Suvari's performance in Kingdom Hearts II. Then again she didn't exactly set the bar high, since it was awful imo.

That said... while I don't hate it, I also don't like her voice (a bit squeaky) or acting in the trailer either.
But I always like Maaya Sakamoto's work, and this time seems to be no exception. (Lunamaria in Gundam SEED, Aigis in Persona 3, Lightning in FF XIII, etc.)

I get if some people don't notice a notable difference. But I do.
And generally speaking, in Japan their voice actors tend to have greater range in their acting (mainly for mediums like anime and Japanese games where they speak a certain way) because in Japan voice acting is an actual career that they go to voice acting school for. Wheres in the west, people get into it because they saw an add for it, and applied.

Something that illustrates this is if you look at all the voice actors Aerith has had in English vs Japanese. 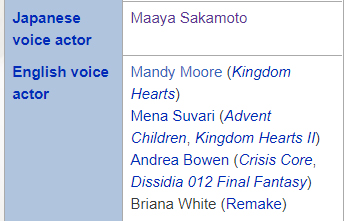 In the west they keep replacing Aerith's voice actress.
But in Japan there's only ever been one.

Maaya has been Aerith in everything. 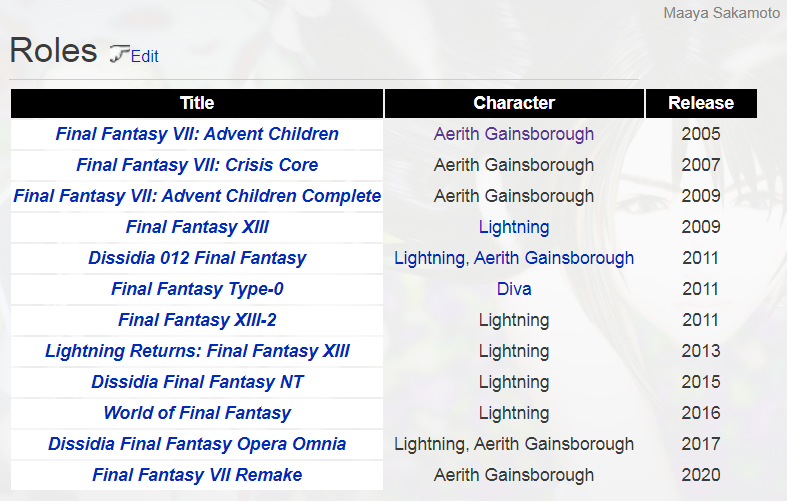 (Including Kingdom Hearts, which isn't listed there since it's just Final Fantasy games.)

I hope there's a Japanese language option in the game. If there is, I'll play it in Jp the first time around, and English in a replay.
If there isn't, I'll probably buy the Japanese version.

Since the PS4 released every SE game (even remasters) that is not called Kingdom Hearts has had dual audio. And since KH is my favorite game series, this stings like no other.

Some times if I don't compare it to the Jp version, I don't think about it.
Kingdom Hearts was an example of that for me, up until around Kingdom Hearts 2. But I like most of the KH characters in English, luckily.

Final Fantasy 7 Remake seems to be a massive game though, on multiple discs, so I'm concerned about them being able to fit the audio on the discs.
However, they could make it a downloadable file, like for FF XIII-3. I'd even pay money for it.

Yeah, like I said, it wasn't an indictment of this particular voice actress. I just think the trend in general is negative. I'm sure she's fine if they brought her in for this level of big budget project.

Voice acting is taking extremely serious in Japan so it's exceptionally rare for them to ever replace a role, even though it can happen (usually when doing straight reboots or remakes). Voice acting has become more serious for games and dubs and whatnot lately in the West, but Japan always had it as its own respected career, entirely separate from "regular" acting.

As for Japanese voice options, I wouldn't worry. Square-Enix are very good at including it, and I'd be absolutely shocked if FF7 didn't follow suit.