Or how many bullets were fired on Gears of War.

It's even been a while since they've reported how many miles were driven in Forza.... those states mean something dammit!!!

Hopefully for your sake, MS will announce those figures for you shortly. Don't stress they are coming.

I stick with two different shaders though. I'll be waiting for that RT shaderpack to release for free, once it's more or less finished and out from the Patreon wall.

This is one of my shots from the other day: 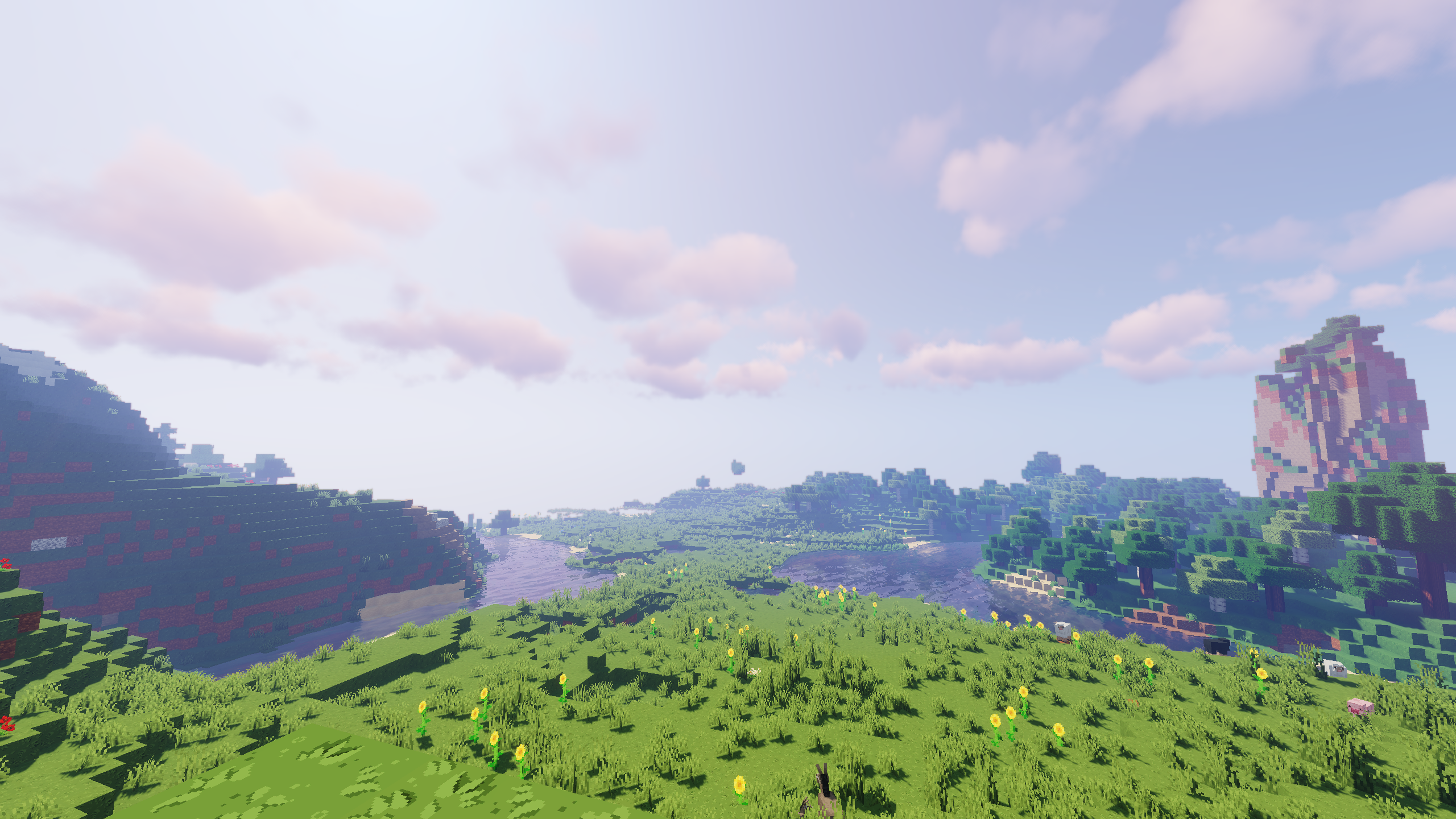 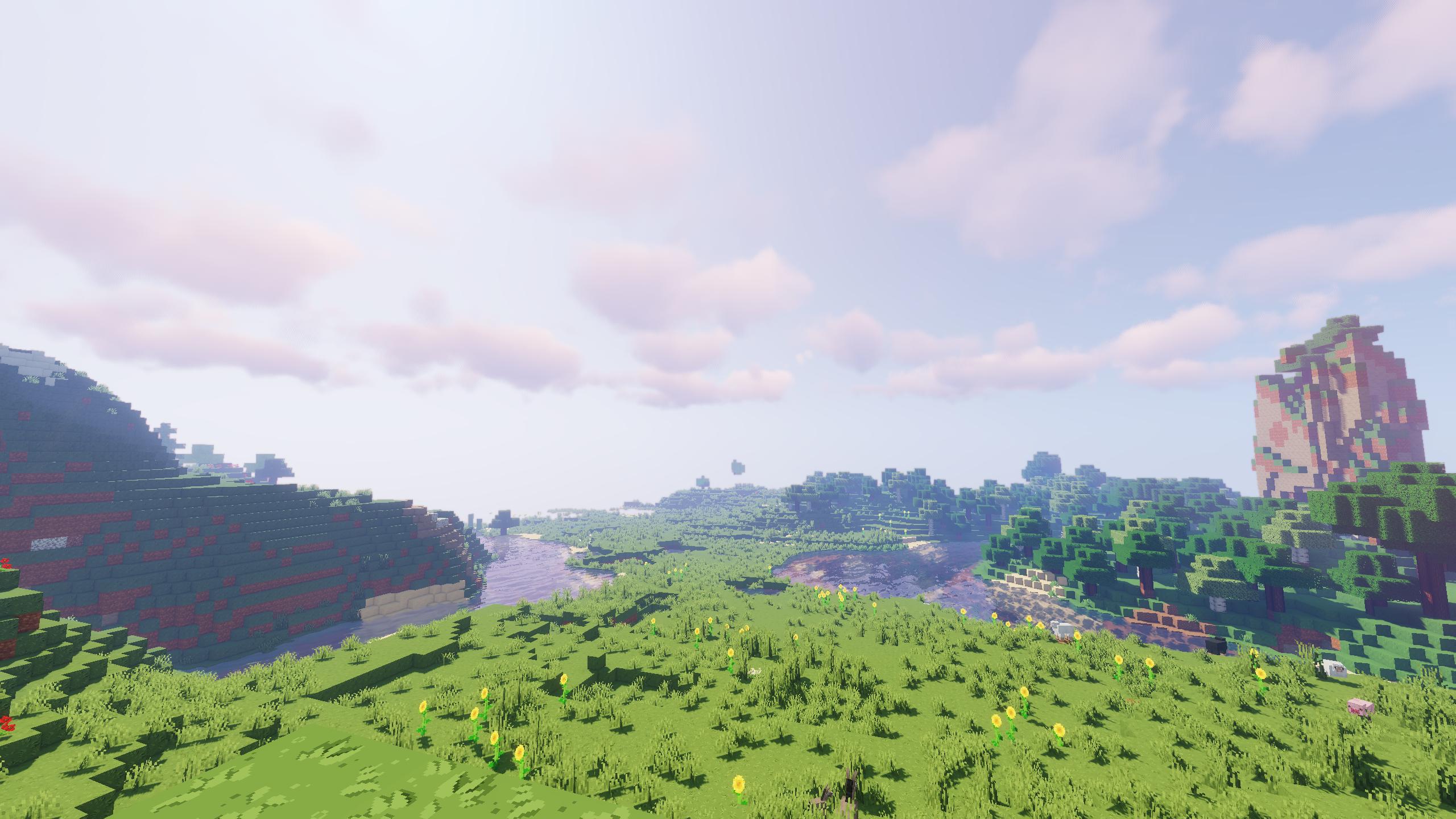 (This one is "Sildur's vibrant shaders" high settings shaders): 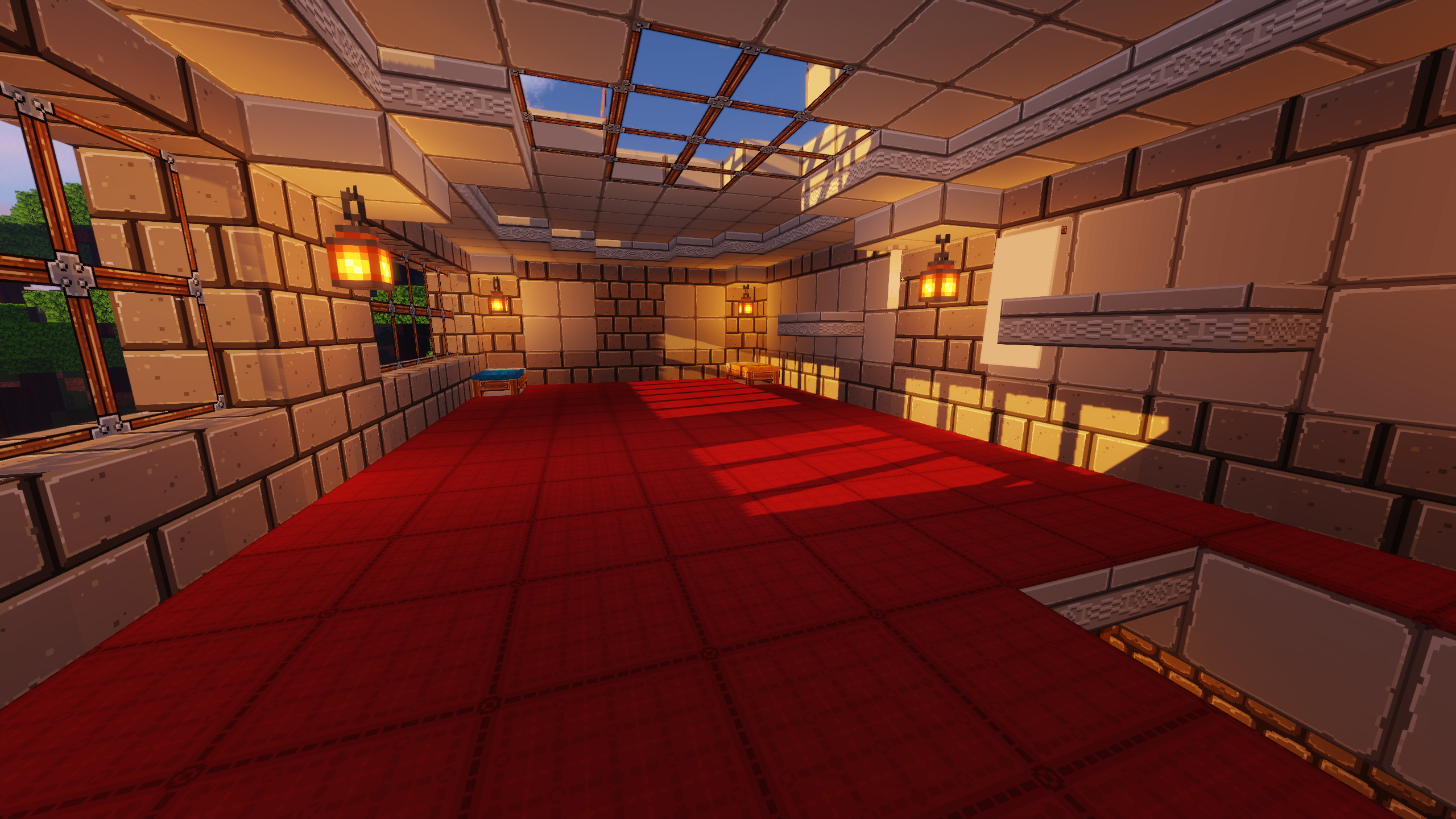 And even with the high or extreme settings, I'm still able to play this at 1440p and well above 60fps. Optifine is needed for shaders to run, but even then, Optifine itself gives you more options to tweak with and that performance boost (allowing MC to use more RAM, rather than the standard 2gb).

I find myself unable to live without using a shaderpack, mostly because the added lighting/shadows gives me more immersion and depth to the game. Actually exploring caves with a torch in my hand, that actually lights up the way, makes cave exploring both immersive and terrifying at the same time. I can even drop a torch from my inv, and watch it drop down a chasm like dropping a flare down there (and it still stays lit until you pick it up, which is due to an optifine addition).

Optifine also allows me to make trees, plants, vines and crops sway, and the shaderpack makes the water form waves as well.

Even just the addition of realistic lighting makes MC look like a completely new game, you say you're running 1440p/60fps but what GPU do you have in that machine? I've got a 1700/980ti or 2600/780ti builds but I haven't modded Minecraft that heavily since I was running my old Core2QuadQ6600/GTX760 I wonder how much I could get away with now with newer builds, been considering getting a 5700xt or two for both my machines, the cost of them is really nice for the power they offer. Still a shame not to see stuff like this coming to the consoles, I love playing Minecraft on the Switch even though it doesn't have the streaming ability of the ps4, would be awesome if the system could handle doing that as you play but I think that would definitely need a pro revision for the Switch.

Love screenshots though, thanks for sharing.... Jealous a bit!

Sporting a 1080ti atm, but back in mid 2015, it was a 980ti. Even back when optifine first came out, I was still getting better performance than without it.

I reckon you should grab the latest optifine version and see how much you can get for eprformance first, then try a shader like Sildur's vibrant shaders or Chocapic13's shsders, as both offer various versions of their respective shader packs, each that offer more or less options, depending on which one you choose.

I will say though, that the shader packs I use are not raytraced ones, hence why I'm getting good performance metrics.

Like I said in that article, they MS can absolutely make this happen. They just need to really care to make a few calls and bring some of the modders into their core team at MJ, and make it happen. if a modder can do this sort of thing for years, and even improve upon it, both technologically and performance wise, then so can actual devs, paid to do it.

Nice nice, the 1080ti is still a king of GPU power unless you're wanting to see 4k/60/ultra but like... most of what I do on my PC is playing smaller titles and the fact that it has an 8/16 core cpu and a 980ti in it just means if I wanna click on a game it will run fine without having to check the box requirements heh. I was mostly considering getting a pair of the 5700xt's just to support AMD's work in cpu/gpu the last couple of years, I really think they should be appreciated more for their moves to make Mid/High end PC components affordable by anyone.

As for the last paragraph you wrote, yeah like... you have people who create mods which look like that as a hobby while also working a full time job and having a life which doesn't focus on them, if you were to remove the stress of the job and give someone money to work 39 hours on those graphical updates and give them the hardware/software backing of MS... you would see some amazing results and not for a whole pile of money I wager... I mean, they could just put out a recruitment drive directed at the MC modding community to basically submit some mods and coding experience for a nice contract working with MS on one of the biggest IP's they own, no one would turn down that prospect even if the money wasn't great.

Maybe it is like you said though, that work they had done will become the core work of Minecraft 2 and they didn't want to make the base MC look better so that fans would see a larger jump going from vanilla MC > MC2, kinda like how Nintendo Canned work on Starwing 2 so that Lylat Wars would look more impressive as a leap from the first game, rather than having those stepping stone upgrades in between big releases. Guess we'll just have to wait and see now..... and download mods for the base game! Appreciate the names of the stuff to check out btw, I've got a very busy week this week... then next week I'm out of the country but should be back by the start of Sept and I might get some time to actually fire up one of my PC's, this is primarily why I would have loved the update on Switch, I'll be traveling nearly 20 hours and my PC wouldn't last 10 minutes on the Switchs little battery :D

Oh aye. I'll likely be good with that GPU for a few more years, until RT becomes a common staple, that I'll feel the need to go for a new GPU by then (hoping at least).

I'm not really into the 4k scene, not until I start seeing 4k res assets (even the small rocks and the ground itself =P), then I'll probably go for it.

I too end up playing smaller titles myself, a lot more than AAA in fact, but that's down to how most AAA games these days, don't bother pushing for eye popping visuals, outside of character models and certain objects the pc can touch (Though recently, games like RAGE 2 are nice to look at). I like mucking around with mods that give the user some visual settings to tweak with quite often (like me with Minecraft, or Star Wars Empire at war/Homeworld).

I'm not sure about multi GPU setups, but that's just me and how I see both companies and devs not really giving us much to play with in terms of dual GPU configs. I would love for devs and both AMD & Nvidia to put a bit more effort into the dual spec, sometime in the future and not giving up on it entirely.

I think MS could do what Bethesda was originally trying to do, in terms of making sure modders get paid something, but rather than simply having them sit around, churning out mods to then sell on a storefront (like bethesda does), MS could simply call in these modders, and see if they want to work, in making said mods available via Bedrock, but also being paid, much like making a commission, but not having the modders chained in any way, or expecting them to churn out mods only for Bedrock (because that expectation, like you mentioned before, could dampen their innovative skills, and it's better to be free and given the time to do what you want with what tools you've got).

I mean, like Pem said some months back, I don't think they could make a MC2, but I'm sure they could in some way, and get shaders to work with a new piece of software/coding, even gaining more performance out of it compared to what they have now. I just wish they'd do something about the project, rather than outright dropping it after 2 and a half years of working on it, it feels like such a waste.

Also, I thought I'd finish this post with a shot I just took, using Chocapic13's Shader pack (as opposed to the other shots you saw before, that were using SIldur's pack): 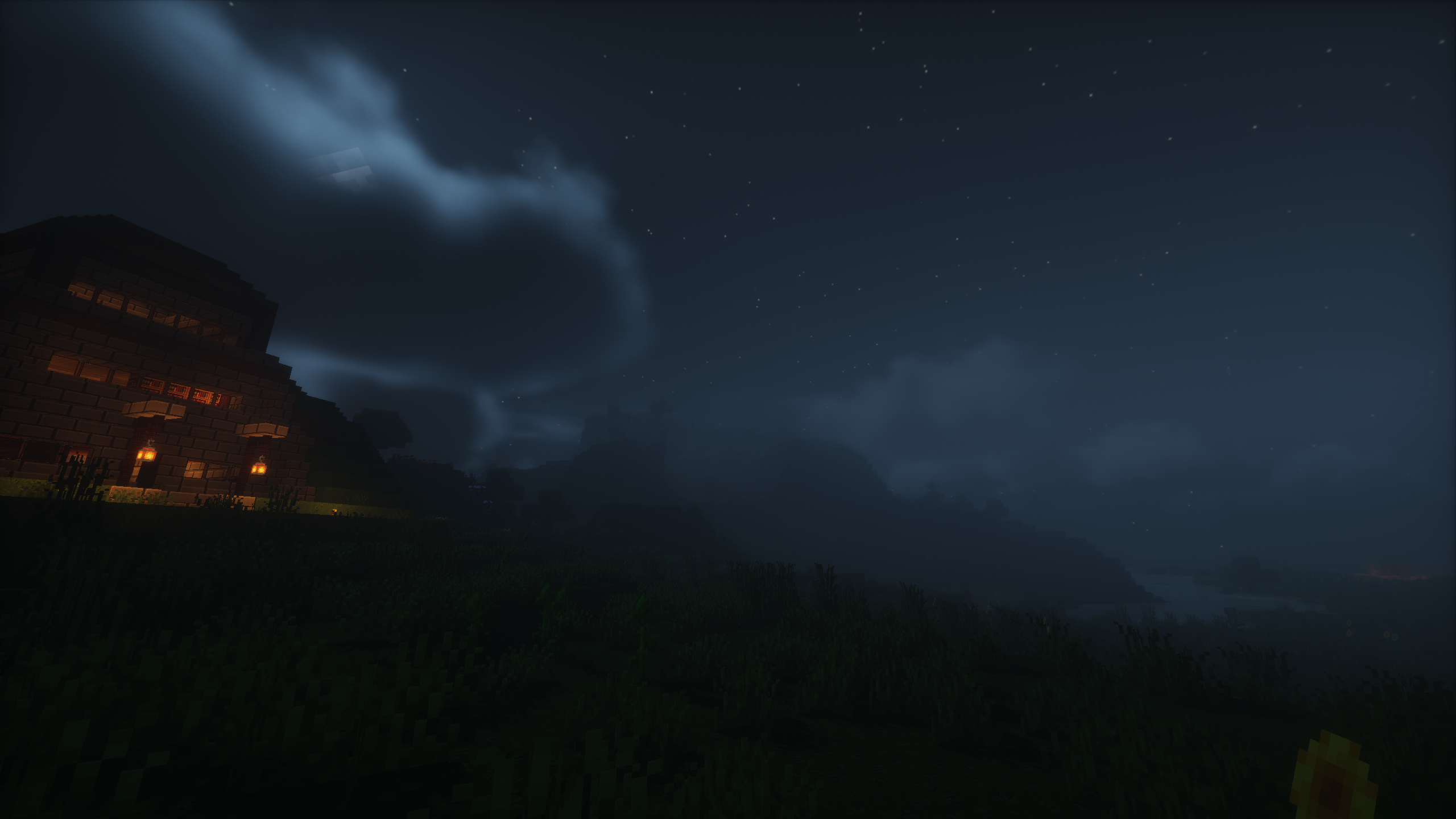 So I just came across this on Nvidia's twitter:

And it doesn't make any sense at all. They haven't detailed what's going on, when this is coming out, which version of Minecraft this is even for. I'm not going to shell out for an RTX GPU, because as it currently stands, the cheapest one is pitiful in terms of performance, and the top range models still take a hit in performance with RT , as well as resolutions, and ofc the price tag is too high for my liking. I think I'll be sticking with my current shaders, because I don't need to wait what could be another year or more, and having to sell one of my kidneys.

For me 4k and Raytracing is a monstruos waste for Minecraft