Nah I was just joking with you...

Ok ok it is real I am not that mean: 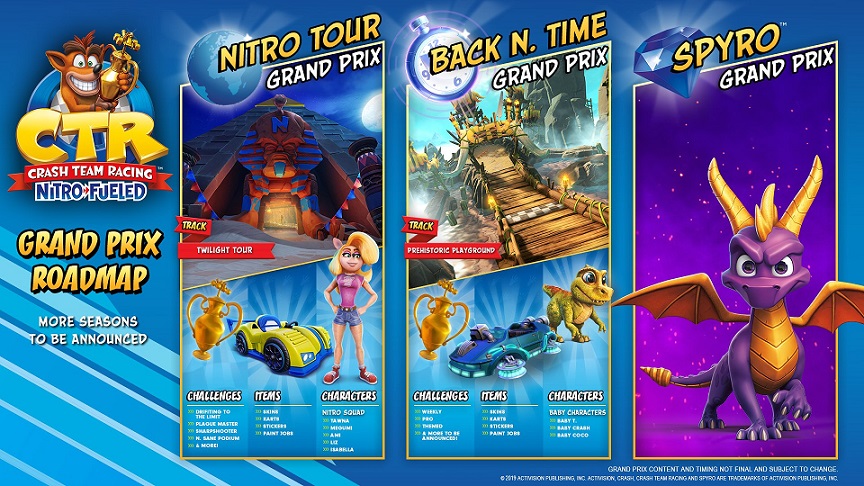 Spyro will be operating a vehicle. That should be interesting.

Thanks for the tips :)

Here is my personal review of the game.

CTR is a Solid Kart Racer that gives a good alternative to Mario Kart 8. Does it take the crown from MK8? No it doesn't but a must play for Kart Racing fans. 8/10

I actually would give it the exact same score but I give it a couple more flaws. Loading screens and the inabilty to earn gold offline (switch version) are really irritating. It's still a must play and since it was way ahead of it's time in 1999, it holds up great now.

-The graphics are amazing, obviously the Switch version isn’t rendered as great as the PS4 version, but it still looks fine to me, and the framerate is constant during races.

-Powersliding in this game still feels as amazing as it did in the original, and the main reason I will always swear by CTR over any Mario Kart.

-The lack of full custom control options is dumb; I wanna be able to use the back trigger buttons for drifting, causing using the front ones hurt my fingers after long sessions.

-Online is... weird, like it works, but idk I feel like connections from other players drop for no good reason, maybe it’s a Switch thing.

- The Pit Stop sucks, takes forever to get enough coins just to unlock stuff (keep in mind I place 1st place consistently in online, which gets me around 400 coins per race and it still takes while).

-Loading times are pretty meh, I don’t mind them too much in single player, but it makes online feel so slow, like it takes ages just to go from one race to the next.

Overall this game is amazing, but I am hoping for a couple QoL patches that can make this game truly perfect.

You got 400? I got 40.  I don't mind the pit stop at the moment. They mentioned that you will get bonus wumpa coins when the seasons start and I am not really into buying all the stuff at the moment.  Like I mentioned before if I finally beat all time trials I probably will end up with all the coins I need because the times are so hard;  N' trophy is doable.  Controls/online I have no issues but I would not mind if loading times would be shorter :p.

Haven't used the feature but im pretty sure the Switch itself let's you remap the buttons for any game.

Huh ... really ? I don't remember any update from Ninty mentionning that ...