Let's be honest, this is much better than a port announcement. At least with this we are getting an actual new game.

Hell yeah! Although I was hoping for it to be the fighting game (rumor has it it got delayed due to Arcsys working on Granblue Versus), I'll DEFINITELY take this.

And yeah, at this point I wouldn't expect a Persona 5 port to Switch. Maybe it'll happen, but for now any expectations I had were buried along with the enemies Joker blasted away.

Oh and Atlus, please keep the P5 milking coming! I'll take it all! 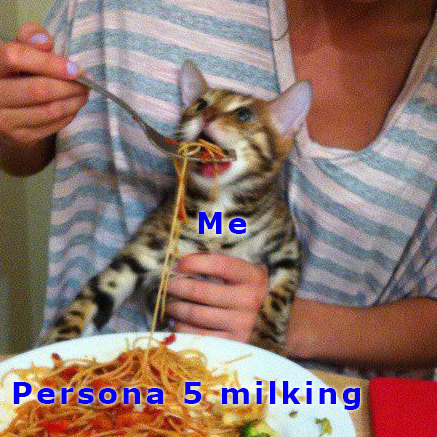 Presuming a Persona 5 port to Switch would be more or less identical to the PS4 version. I don't think people should have expected the game to have "Switch" in the title.

*ininteligible noises coming from frothing from the mouth*

Im surprised this coming to the switch. How are switch players supposed to know who the characters are?

Odd argument considering that the 3ds got Persona Q, and Persona Q2.

Persona 4 U wasn't on Wii U, was it? Nope. It was obvious that this one would be the same. Seriously, people were expecting Atlus to develop at the same time 2 different upgraded versions, each with exclusive content. No chance. The only chance was to announce P5R for both PS4 and Switch, the rest made no sense.

I spent quite a long time on this forum saying to people "No, it won't be P5 Switch, it will be a multiplatform spin-off". I was wrong on the spin off genre (expected the usual fighting game), but am I allowed to laugh at all the people who were so confident about it because "S=Switch, duh"?

XBox 360 players never knew the characters before playing the fighting games either, no big deal.

I'm cool with this but would've loved another Persona Arena. With Persona 5R coming I probably will have to skip on this for now. There's only so much Persona 5 I can take right now lol