I did write some of my thoughts after watching the episode. I stated my surprise they took the "lesson learnt" route and went with such a happy ending. So yeah, it was like any other show and not in style of GoT. Or at least how I saw GoT.

I expected and wanted more bitterness tbh but overall it left a happy feeling how things turned out. It sucks a bit they rushed the Dany&Jon romance so Jon killing Dany wasn't emotional at all. And it wasn't surprising.. It might have helped a bit if Dany wasn't suddenly wearing that Edward Scrissorhands outfit, but basically they needed 4-5 more episodes. Emilia & Kit did all they could.

Everyone probably noticed it was the most jarring episode ever. Cut was so weak. I checked and it was directed by D&D. I don't know why they wanted to do it because other directors did a great job imo despite having to rush the thing. Whole season was full of amazing shots & cinematic stuff. Sometimes at the expense of making sense (Dothraki charging into darkness with flaming swords for example) but that's ok.

Anyway, it wasn't the finale I expected it to be and it highlighted how quickly they wrapped it up but it left me feeling good about The series. Me and my wife wanted to watch the whole thing again asap and are now 6 episodes in first season. Amazing series!

Yea that actress that played her went through a lot. I heard in an interview she almost died after first season or two in real life. She kept having brain hemorrhaging and had to have 2 surgerys. Would be a shame for such a fine piece of ass to die so young.

Just a thought about this. I mentioned in my other post I think they only needed 4-5 more episodes to add enough depth to story and make it less jarring. Not sure if dragging the thing for 2-4 more seasons would've been good. If it's even that easy to keep all the cast etc commited to the show. I'd imagine they'd want to move on with their careers when GoT is at it's peak.

Few more episodes to build up Dany&Jon love story, add maybe bit more depth to all the supernatural stuff etc. Most importantly, They could've and should've done more with Jon finding about his parents!!

I'm watching season 1 again being a bastard and not knowing his mother is a huge deal for him. He didn't even bang a hot hooker because of it! And writers did nothing when he eventually found out. This for me is the biggest shortcoming of season 8.

Also much add that it's a bit rich from GRRM to "attack" these guys like this. He is working on multiple projects himself instead of finishing his own work and then blames others for wanting to do something else. At least these guys finished the story first. And before you blame me for defending D&D, this is more frustration towards GRRM.

I agree D&D should've let someone else write the rest of it. But it is what it is.

Ah, I didn't see your thoughts on that earlier.

And yeah, the Jon & Dany romance always felt rushed to me. So that, in combination with not trying to make the viewers empathize with Dany over her recent decision, made that scene fall pretty flat. The CGI creature (Drogon) nudging his mommy was actually more emotional.

I didn't know Dan & David were directors this episode. I guess that may explain why Jon and Tyrion were seen walking through the city for 14 minutes. I would have rather seen how Grayworm reacted to Jon killing Dany.

I'm glad you enjoyed it though. Among people who didn't, there are those who still enjoy the earlier seasons, and those who don't because of how the culmination of the stories affects they way they view them in the beginning.

Yeah, I heard that as well. She's probably more invested in the character than anyone. And it was her first big role, and possibly the character she'll get associated with the most for the rest of her life.

That's a very efficient approach.  I try to be efficient as well, but I'm not that good.

Basically, the wife and I rotate our subscription every few months between HBO, Netflix, Hulu, and Showtime.  We watch all the new stuff that we're interested in, then move on to the next service.  We do have Prime all the time though, for the shipping benefit.

Yea she invested a lot into her role.  Last season prob been better if given a few more episodes to flesh shit out.  I just thought outrage was because she went bad but I see your point fans wanted to see more how she flipped to bad.

What's crazy about interview she did was she said she didn't want to be a burden on show even though she nearly died twice.  She is a better actress prob than what show conveyed her for first few season.  To me she was eye candy more than anything but after hearing interview I have mad respect for her.

It's kinda sad. This is video is excellent and very detailed and yet it doesn't even come close to scratching the surface on the long list of issues in the final episode.

Varys had already begun teleporting to Dorn and back at that point, so I just accepted that characters could teleport because they didn't have enough episodes.

I found this datapiece interesting and perninent to the discussion of why the show decreased in quality after the books. As the budget increased, so did the earlier character-focused drama shift into standard shock-and-awe action. Call it "Hollywoodization" if you will. Notice the late blooms in parts of Season 6 and the second episode of Season 8 coinciding with better critical/fan reception. Also of note is the last episode, which included D&D's idea of a peace conference, having the second worst average of the entire series. 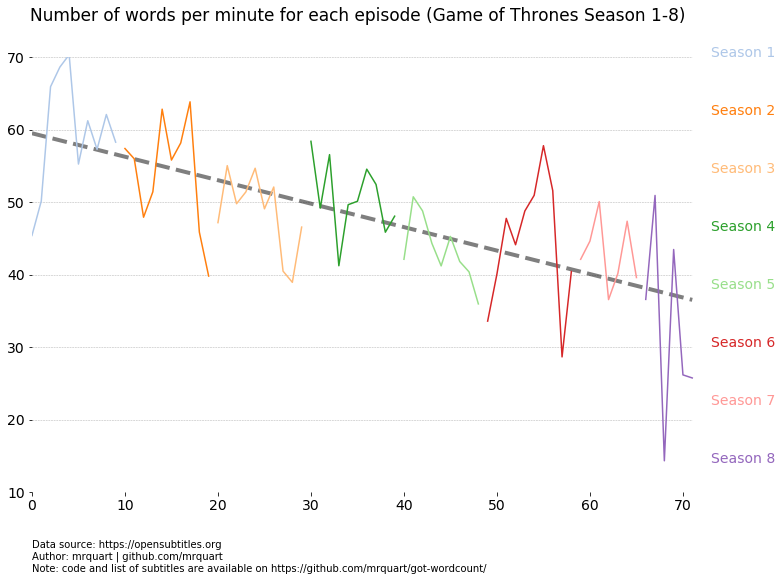