So how do you feel about GOT being like any other show now?

Drogon destroyed the throne, and they started a more democratic system where rulers are chosen. And one of the Kingdoms already left to rule autonomously, opening up the possibility for more to do the same in the future.

It's pretty much the direction I expected them to go with.

And didn't you think that Jon killing Dany was perhaps the most obvious 'plot twist' in the history of the series?
I think everyone saw that coming a mile away. Tyrion even spelled it out for us.

I don't have a problem with obvious story outcomes if they make sense, but because of how this season was so rushed, the scene lacked the emotional impact it could have had because they didn't even bother trying to make sense of Daenerys actions. 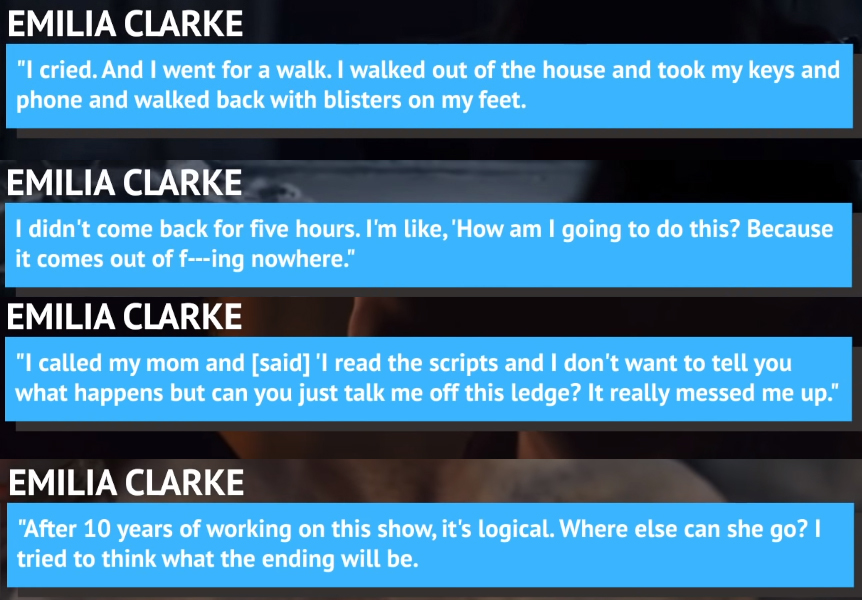 She expected her story to end this way. As many people did. But it's how they got there that's the problem.

The attempt at justifying her actions in Epi 6 was ridiculous. Cercei forced her because she used them as a weakness? No, all she had to do was attack the Red Keep. She did not have to target innocent people instead of going after Cercei.

And remember that Dan & David wanted 7 seasons, but had to be dragged kicking and screaming to agree to 8. How would they have set this up in 7 seasons? Dany ordering a baby from Amazon, and stabbing it on her desk in front of Jon?

Plot twist! The reason Drogon didn't burn Jon is because Bran used his warg ability to control him and he melted the Iron Throne because he had no need for it and at the small council he asks about Drogon to keep his cover but he knows full well where he is because he still has control over him.

Bran seeing the past, all of mankind's terrible past, and possessing that much memory is enough to turn him to someone else. Something else.

This video nails it on pretty much every major issue of the season:

We should also appreciate how Epi 6 took 14 minutes showing Jon and Tyrion just walking through the city.

My favorite character is the Hound. I heard he finally killed his bro. I assume he survives the show? Haven't watched any of final season but can someone inform me of him?

I don't give a fuck about any other character but the Hound. I find it funny people butthurt that breaker of chains (sorry don't care to look up how to spell her stupid name) goes bad.

Immersiveunreality on 23 May 2019
Spoiler!
After finding no way to kill his evil brother and getting his eyes almost gouged out,(he even stabs him in the head) he laughs and he grabs the mountain to push him over the edge of the destroyed wall of the staircase where they have been fighting and they both plummet into the fires far below the ruins of the red keep at kings landing.

Well that was pretty good final fight between them two. I actually used eye gouge move in first real fight (and last) I was in which happened in college dorms. Of course it wasn't as extreme but he cried for help to his stupid frat bros and ended up with a dislocated shoulder. Stoners 1, shitty Pike frat 0

It's also funny when people say "I find it funny" without looking into what the actual issue is.

The consensus seems to be that people are not upset with Dany going bad. It's how she got there that was handled extremely poorly.
Emilia herself said so as well.

She thought it was a 'logical' end to her character's arc. But the way it was handled, coming out of ***ing nowhere, made her cry and left her house walking around in a daze for 5 hours.