It seems like an action game, and honestly if it was not for the star wars name and branding, I do wonder if we would even be talking about this game, because yes it screams generic.

Is this the game that Amy Henning was directing at Viceral and when EA shut it down 2017 it was moved to another studio? If so, I wonder what was the "significant change" that was cited as the rationale for moving the game out from Viceral. Single player story game without micro transactions is not exactly typical EA.

I will get this game on day 1 no matter what, who's with me?

I did not see a game yet,just cutscenes of a game that might have troubled production like recent other games under EA.

I want it to be good but in no way im getting myself hyped up over this cause that trailer showed me nothing i wanted to know.

Well, for instance, compare it to God of War 4. Stig Asmussen directed God of War 3 before moving on to develop Fallen Order. God of War 4 was developed in 4 years, just like Fallen Order, by a similarly sized team. God of War 4 has a 20 hour main story, takes 35 hours to complete the main story + most of the side content, and takes 50 hours to 100% complete the game according to How Long to Beat. Another recent action game, Nier Automata, has a 20 hour main story, 37 hours of main + side, and a 61 hour completionist time (and it was developed by a much smaller team than Fallen Order in 3 years). Compare it to another recent Star Wars game, Star Wars Battlefront 2 was developed in just 2 years and it had a 6 hour campaign and a multiplayer mode with 11 ground maps, 14 hero characters, 5 ground vehicles, 2 reinforcement classes with variations for each of the 6 factions, 5 starfighter maps, 8 hero starfighters, 16 starfighters, and 20+ emotes.

Here is another thing worth noting. EA had the balls to announce that the game has no multiplayer component and no micro-transactions. Basically that is suicide for a short singleplayer only game, as soon as people read the reviews saying the game is small, they will wait on a sale and get the game when it drops to like $30. I don't think EA wants to send this game out to it's death, if the rumors are true they are already on pretty thin ice with Disney and could have their 10 year license revoked if they release another Star Wars game that flops. So yeah, I don't think EA is crazy enough to release a 10-14 hour singleplayer only game, with no microtransactions that they can use to recoup the losses of people waiting to buy the game on sale due to it's short length. 20+ hours seems certain to me, and with a little luck 30+ could happen.

No, that is a different game. It moved to EA Motive after Visceral was closed, under Jade Raymond, but then it got cancelled a 2nd time after Jade Raymond left EA Motive to go run the 1st party studios for Google's new Stadia streaming service. The art assets from the Visceral and Motive game are now being used to develop a much smaller Star Wars game at EA Vancouver, planned for release as a cross-gen title in 2020 according to leaks.

Looks promising but I need to see gameplay and definitely NO preorder. Buy it after it is properly reviewed. 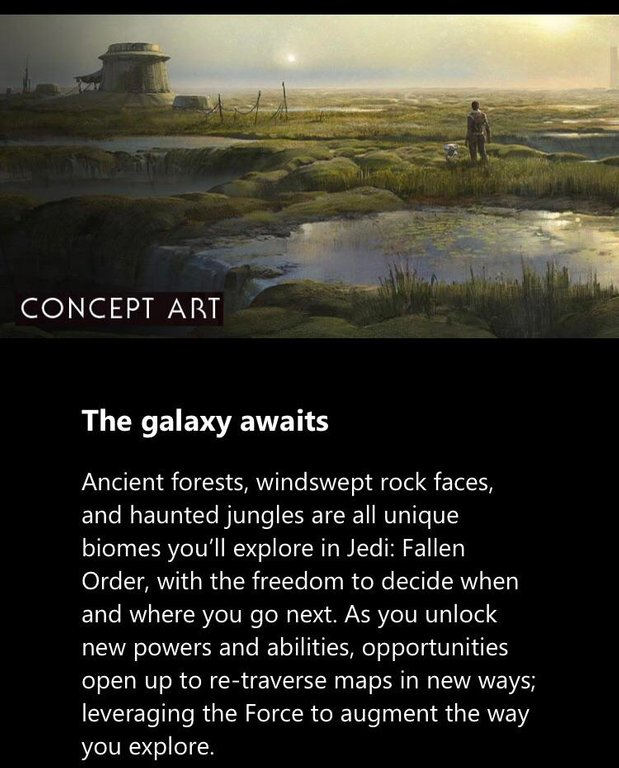 Multiple biomes on the new planet Bracca to explore. Player freedom, you can choose which stages to do in which order. New sections of maps you have already explored are opened up to you as you unlock new force powers and abilities. Sounds like it is more of an Action-RPG than a straight up action game.

Well, it's EA so I don't trust anything about this game until it releases, but if nothing else getting Respawn to make this is probably the best possible option for EA at the moment. Titanfall 2 was awesome, so at least for the moment I'm cautiously optimistic about this one.