If someone asked what is the highest rated current generation game on Metacritic, what would you answer?

And they were competing against different games, so how is that relevant? Maybe God of War got underrated on Metacritic.

We don't know the decimal so they are all 97.

The only game that can exceed 97/100 metascore is the next Grand Theft Auto and nothing else.

If we follow this logic : God Of War remains unbeatable. 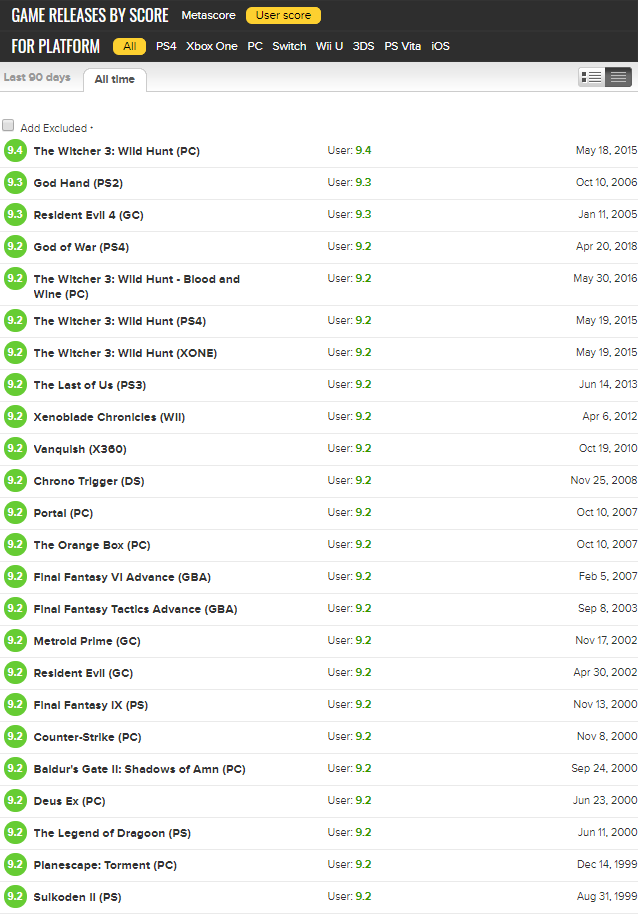 But the Xbox version of RDR2 is the one that a game has to top on the Metacritic list to become more higher rated.

Would you say that if Cyberpunk 2077 on PS4 got 100 reviews and a score of 97, but would be below RDR2 Xbox One, that it would then be more higher rated/equal?

What is the point of that Metacritic list if games can't be compared if they have different amount of reviews, and as a result everything would be only 96, 97... That would also mean that a game which score is the lowest 97 on the list would be regarded as equal to the highest 97 game on the h list. But the highest 96 would be viewed lower than the lowest 97, even though their actual score would be almost the same.

The Last of Us Part II is the only one to have chances to hit 97 on Meta. The problem with Exclusives Games is the Troll/Clickbait reviews, which can drop the score any time...sadly.

Dont Metric weight the publication companies? Like into 4-5 tiers based on how popular they are. So the mroe reviews you et from smaller publicashes the more weighing they get on their AVG which would intern make the decimal smaller.

At the end it doesnt really matter they all 97

it is the same Game, but on a tech point of view, X1X>PS4>X1 base model.  Meta is the same though.