Forums - Gaming Discussion - Epic Games Store is now open, will have a free title every two weeks for all of 2019 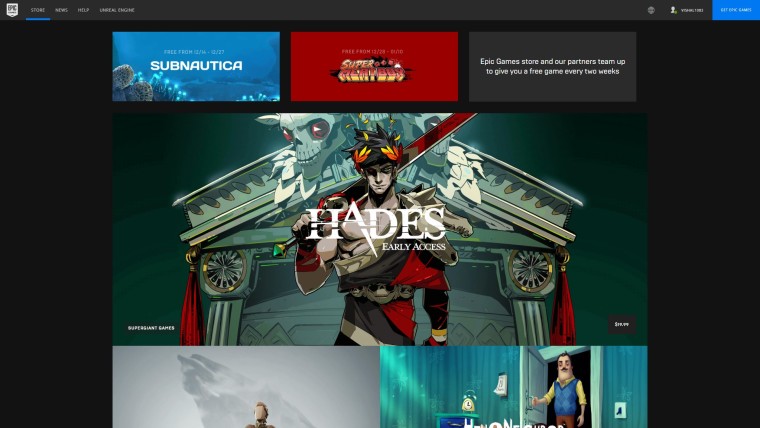 Epic today officially launched its game store, stating that its goal with the store is “to bring you great games, and to give game developers a better deal.”

At the moment the store only hosts six titles, out of which only three are third-party: Hades by Supergiant Games, which was announced as an early access title at The Game Awards; Ashen by Annapurna/A44, which just released on Xbox as well; and Hello Neighbor: Hide and Seek by tinyBuild. The other three titles available on the store are Epic Games’ own Shadow Complex, Unreal Tournament and, of course, Fortnite.

There’s an entire list of titles coming soon to the store as well, such as:

The Epic Games Store will also be making available one free game every fortnight for the entirety of 2019, all paid for by Epic. Subnautica is the first game that will be available for free, starting from December 14 until December 27. It’s unclear whether it will be free to keep forever, or if it will only be free to play during those two weeks. Super Meat Boy will be the next free title, starting from December 29 until January 10 of 2019.

If you have an account at Epic games, I think you wont need to make another account - already made mine - hopefully the games are actually Free to keep.

So, is there store going to be like Steam or more like Blizzard (with a smaller list of games)? If the second, I find it interesting one of the store's launch titles (Hades) is so similar in theme and playstyle to Diablo...

Can't turn down free games, downloading the client. Doubt it'll get much use beyond the free games though.

Subnautica? Awesome! I was going to get it in the next Steam sale, now I took it off my Steam wishlist to hide it from Secret Santa

They are really going for Gabe's jugular.

Not buying into it until it fully supports the features Steam has, while adding more unique ones for itself.

EA gave away free games like Steam has done before, only EA has actively killed their "on the house" program and replaced it with their sub fee paid game pass style "Origin Vault" service, so no more free games on the house anymore.

If they are going to do this, they need to do it for years and years to come, not pulling an EA and save face by doing it for just 2 years and then dropping it when they've drummed up that Bethesda style goodwill.

Also no mobile, F2P or Early access trash either.

I prefer Steam over EA Origin a lot, but that's a very unfair comparison IMHO.

EA gave a lot of their own good games away for free in these four years (March 2014 to July 2018 is a much longer period than two years), How many Valve games did Valve gave away for free on Steam? None? Almost none?

Valve gives other developers a platform to promote their newer games with freebies of their older games and seems to expect such freebies now and then... but they aren't giving away their own games and probably aren't paying developers for freebies either.

I like what they're trying to do here, and if publishers embrace the larger cut they get, it could create serious competition for Steam, or pressure them into giving publishers a larger cut themselves.

Epic Games obviously have a ton of money now that they can invest into this project.